Andy Ruiz is hoping it soon whittles down to one—his own.

The once-beaten heavyweight contender enjoyed his PBC debut in the best possible way. Ruiz scored a 5th round knockout win over Alexander Dimitrenko live on Fox last Saturday and then shortly emerged as a front runner to land a coveted title crack at Joshua on June 1 at Madison Square Garden in New York City. 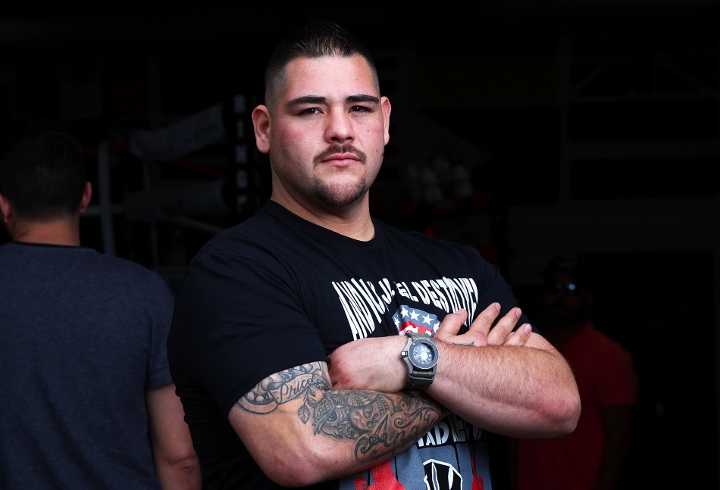 Ruiz is hoping to have his cake—or in his case, Snickers bar—and eat it too.

“I think Anthony Joshua (is next),” Ruiz (32-1, 21KOs) stated to Fox Sports’ Kate Abdo during a recent interview on FS1’s Inside PBC Boxing. “We’re in negotiations right now and hopefully they pick me. I have had a phone call (with Hearn). They’re talking to my team, but I don’t want to get ahead of myself.”

Three wins have followed, including the aforementioned knockout over Dimitrenko at Dignity Health Sports Park in Carson, Calif. Ruiz weighed 262 pounds for the bout, his heaviest weight since a Dec. ’14 win over Siarhei Liakhovich which served as a breaking point in improving his oft-criticized conditioning.

Not helping matters was the heavyweight revealing his affinity for Snickers bars after the fight and again on Wednesday, perhaps fishing for an endorsement deal.

“My dad always gave me one of these when I was a little kid. Maybe that’s why I’m a little chubby,” he noted on Wednesday, half-joking.

That said, Saturday’s fight was his first in eight months and now has more motivation than ever to remain active.

“I want it right now,” Ruiz stated of the chance to face Joshua. “I just got done fighting. A month more, I will be more sharp, more fit. I’ll be ready for that fight.”

Perhaps even more encouraging is the fact that he’s currently the desired target, or at least high on the very short list.

“I’d say Andy Ruiz is one of probably four guys who are frontrunners to land the fight,” Hearn acknowledged to a group of reporters on Wednesday in Los Angeles, where he was in town to promote a show on Friday in nearby Inglewood, which streams live on DAZN. “At this point, it’s about who wants it first.”

Among the other candidates are Michael Hunter, who recently signed with Hearn's Matchroom Boxing and is currently slated to fight on a May 25 DAZN show and—despite his team's recent ridiculous statements to the contrary through the media—veteran top contender Luis Ortiz.

Whether Ruiz lands the sought-after shot at Joshua or another heavyweight fight of significance, he plans to take a “less is more” approach to how much he plans to carry on his 6’2” frame.

Ruiz has a good chin. AJ will test it, big time. More than anyone else he's faced. He has the workrate and the hand speed to keep AJ off balance at least, but I can't see him surviving 12 -…