Andy Ruiz: 3 Months of Partying, Celebrating Got Best of Me!

For all 15 minutes of his post-fight press conference, Andy Ruiz was saying sorry. He apologised to his father, his apologised to trainer, Manny Robles, he apologised for being overweight. This was not the time to try to pull the wool over anyone’s eyes, this was the time to admit you were wrong.

When Ruiz scaled an extraordinary 283lb at Friday’s weigh-in, it would be an understatement to say eyebrows were raised. Some made up excuses or claimed he had had weights hidden in his pockets or under his hat. The truth was he didn’t train.

It wasn’t a complete surprise. There had been rumours of sparring partners turning up at Ruiz’s California gym, only to be told the champion wasn’t coming in to train. Ruiz admitted Robles and his father had nagged him to work harder, but he didn’t bother. Almost every answer in his press conference reverted to talking about his weight.

“There was always tomorrow, tomorrow. I should have taken this fight more seriously,” Ruiz said. “Three months of partying and celebrating affected me.” 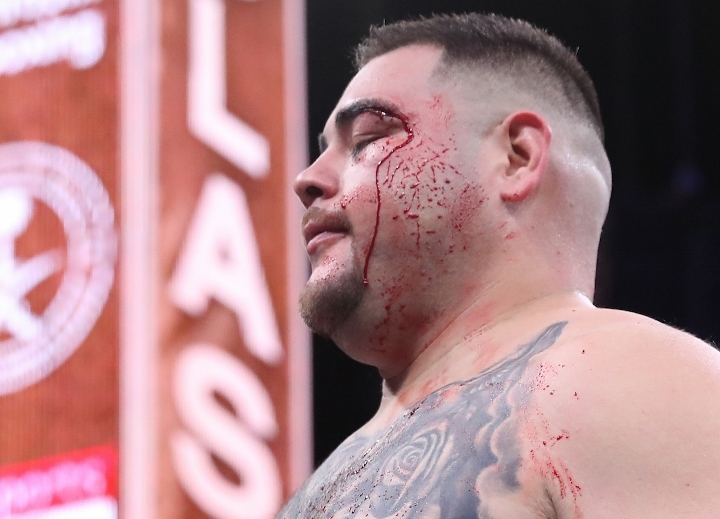 Ruiz said the excess pounds had prevented him performing.

“I was slimmer [at the start, I put on the weight and it was my mistake. I felt to confident. I should have trained harder and listened to my team and coaches. We did the best we can I can’t wait for the next fight. He won one, I won one and this is a trilogy.

“I’m not scared of any of my opponents. If I had let my hands go as I did on June 1 I think I would have won. He was boxing his life out.

“I should have pressured more, I waited too much. My arms weren’t as fluid as they normally are. I think it was because of the weight, I came in too heavy.”

Ruiz admitted that he had overindulged when he won the title.

“A lot of things were going on,” he said. “There is no excuse I learn from my mistakes. I know I will be ready for the next one. The partying and all the stuff got the best of me.

“I kind of trained on my own. I’m sorry to Manny, I am sorry to my Dad, I should have listened.

“The only thing he did well as was move around as good as he could, but when I let my hands go I did land. He did a good performance, he boxed me well. I was just following him, I wasn’t doing what I do best.

“I want to rest, I want to talk to my team, I want to think about my career. I will fight anybody in the game. I’m a danger to anyone, I have the heart of a lion.

Robles said Joshua had a good gameplan, but he said that he remained fully behind Ruiz.

“We did expect him to stick and move, he did a good job of it,” he said.

“We felt he was going to stand and fight a bit more. When he did, we felt Andy got the better of him, but he went back to moving. We commend him and his coaches for a good gameplan.

“As a coach you have to be with your fighter 100 per cent. I have to apologise to Andy too. It’s a team effort, when you lose it hurts.”

Heavy is the head that wears the crown. You could tell that AJ was relieved when he lost the belts, but it was that moment that allowed him to rejuvenate and re-calibrate. Meanwhile, Ruiz discovered the difficulties that arise from…

[QUOTE=Verus;20241087]DAZN has made a long term commitment to stream Hearn fight worth around $1billion. All of that goes up in smoke if Hearn is even accused of fixing fights. That is a huge risk. Plus he promotes a ton of…

Don’t hide your face. It’s going to be a longggg way up. Put the food pipe down!

Andy, if you weren’t ready why didn’t you fake an injury to postpone the junk performance. First Mexican heavyweight let so many people down. From hero to zero. No excuses man.we have to forgive you

No excuse for being dumb & lazy. The first Mexican champ in boxing history, and you do this..when so many people believed in you (including myself) you could’ve made history, but you fvkd up.