Apparently, the previously explored showdown between Oleksandr Usyk and Andrey Fedosov will happen next.

Less than a week after previously declining an offer to face the unbeaten former World cruiserweight champ, Russia’s Fedosov and his team have reportedly agreed to terms for the fight, two sources with knowledge of such talks informed BoxingScene.com.

The bout—which marks Usky’s official heavyweight debut—will take place Oct. 12, streaming live on DAZN from Wintrust Arena in Chicago, Ill. A representative from Matchroom Boxing had no knowledge of the agreement when BoxingScene.com inquired seeking comment on the claimed development. 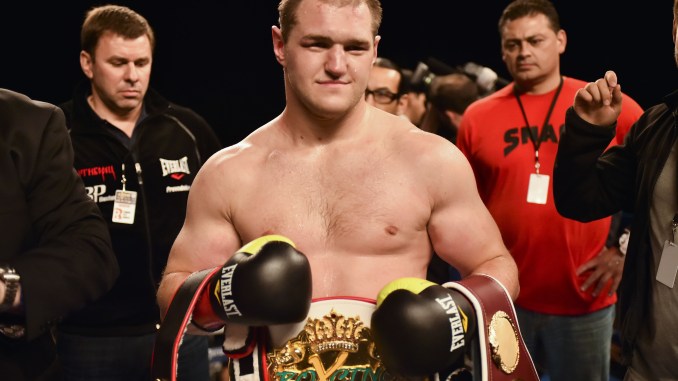 For Usyk (16-0, 12KOs), the moment comes nearly five months after originally planning for the occasion. The 2012 Olympic Gold medalist from Ukraine was due to face former title challenger Carlos Takam, only to suffer a torn biceps injury in postponing his anticipated heavyweight debut.

It was also just enough to potentially lose out on revisiting the matchup.

Efforts to resurrect such plans were complicated earlier this week when Takam signed a promotional deal with Joe DeGuardia’s Star Boxing. DeGuardia and Hearn have done past business together; however, past history didn’t at all play out here as the veteran contender was quickly downgraded from his previous position as the frontrunner.

From there, Fedosov (31-3, 25KOs) re-entered the mix a week after internal discussion between his manager and stateside promoter resulted in his team instead exploring other avenues. The streaking contender reportedly first sought a tune-up before entering such a fight, but has since had a change of heart.

The 33-year old knockout artist from Russia—who is now based in California—has won seven straight since a 7th round knockout loss to former title challenger Bryant Jennings in April 2013. The heart of his current run came in the 2015 ESPN2 Boxcino Heavyweight tournament, scoring three straight knockouts to conquer the eight-man field.

A potential clash with Usyk will come exactly 52 weeks prior to his last ring appearance, a 10-round decision over veteran heavyweight trialhorse Joey Dawejko last October in Russia.

Usyk will fight for the first time in 2019, likely to be his only appearance of the year following a Fighter of the Year-led campaign in 2018. The uber-skilled southpaw scored three big wins on the year, including fully unifying the cruiserweight titles with road wins over previously unbeaten Mairis Briedis and Murat Gassiev.

The banner year was capped with an 8th round knockout of Tony Bellew last November in Manchester, England. It marked his 6th and final defense of his at least one cruiserweight crown before severing all ties to the division earlier this year.

As previously reported by BoxingScene.com, Usyk is now the mandatory challenger to the World Boxing Organization (WBO) heavyweight title. The belt is one of several currently held by Andy Ruiz, who is due to defend in a rematch with Anthony Joshua reportedly set for Dec. 7 in Diriyah, Saudi Arabia.

[QUOTE=Boxfan83;20003320]Would be crazy to see shorter HWs take over.[/QUOTE] Indeed! Shorter, but faster! Speed kills... no matter what the category.

[QUOTE=JakeTheBoxer;20004747]What happened with usyk -Takam?[/QUOTE] Takam signed with Star Boxing. I guess it's still a possibility. 🇺🇦 Oleksandr Usyk’s K2 promoter Alex Krassyuk has confirmed that Andrey Fedosov has accepted an offer to face Usyk on his…

What happened with usyk -Takam?

Fedosov is ranked in top 50 and younger than Takam, not a bad fight. Fat Fury would never fight Fedosov.

[QUOTE=joe strong;20003346]I agree with you Big Z! I am cool with this opponent. A decent C level fighter. A short HW with some pop. I expect an easy win for Usyk though...[/QUOTE] Going to look a lot like usyk schooling…