It's not the version of the title for which he hoped to fight in ending his 2019 campaign, but Andrew Moloney continues to make the most of the hand he's been dealt.

The unbeaten junior bantamweight claimed an interim title following an 8th round stoppage of a game Elton Dharry, who was forced to retire after eight rounds Friday evening at Margaret Court Arena in Melbourne, Australia.

Dharry was deemed unable to continue prior to the start of round nine due to the severity of his right eye which was swollen shut. 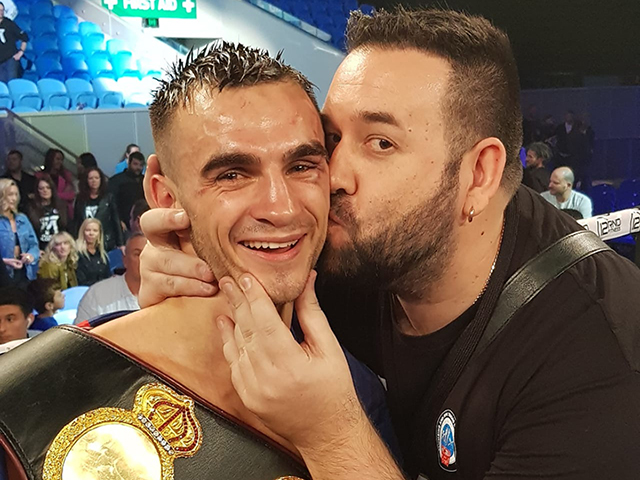 Fighting roughly an hour after watching twin brother Jason Moloney score a 2nd round knockout on the undercard, the slightly lower weight Moloney twin from New South Wales sought to make it a familial clean sweep for the capacity crowd on hand. Similar to his brother, Moloney came out aggressive although against a durable and disciplined foe in Dharry, a Brooklyn-based Guyanese contender who had never been dropped or stopped in 30 prior contests.

Moloney made the necessary adjustments after briefly getting careless in the opening round, returning to the basics and connecting with classic 1-2 combinations while fighting behind a tight defensive guard. Dharry absorbed the shots well, though to his detriment as his right eye began to swell.

It would become a significant development as the fight progressed, as Moloney continued to pump his heavy jab, at times as a standalone weapon. Dharry enjoyed occasional success with counter right hands, exploiting the few occasions where Moloney dropped his guard in loading up on left hooks to the body.

Dharry took his best swing—figuratively and literally—in a far too thrilling round five. Moloney was buzzed by a right uppercut midway through the round, spending most of the back half of the frame alternating between clinching on the inside and lateral movement whenever able to create distance between the two. Dharry charged forward the entire round, pushing forward with right hands and also targeting the body whenever Moloney attempted to clinch his way out of trouble.

The momentum shift spilled over into round six, although Moloney was able to regain his bearings just enough to set the tone for the beginning of the end. Enough left hands got through to cause Dharry's right eye to swell shut, though complaining of a headbutt having caused the injury. He fought his way through the pain, continuing to land right hands with alarming regularity, but with Moloney swinging back hard as opposed to having to fight for survival one round prior.

Dharry was examined by the ringside doctor prior to the start of round seven, the first of three consecutive rounds in which there were expressed concerns over his fighting safety. It had a major impact on the right of the fight, with Dharry's right hand remaining cocked to protect his eye, functionally removing his most effective weapon.

Moloney exploited the sequence, scoring with right hands of his own while also connecting with body shots. Dharry continued to fight back on the inside, but was slowly wearing down in addition to fighting through impaired vision.

As was the case one round prior, the assigned physician demanded a look at Dharry's eye at the start of round eight. Action was permitted to continue, with Moloney spending most of the round working behind his jab as clear means to worsen his opponent's wound and force a stoppage. As much would come by rounds end, was Dharry was disallowed to come out at the start of round nine.

The ending left Dharry with his first stoppage defeat, also snapping a 21-fight wins streak as he falls to 24-6-1 (14KOs).

Meanwhile, Moloney caps a productive 2019 campaign which began with a knockout win on the road and ended with his being in possession to challenge for the division's top prize.

The 28-year old began the year with a 10th round knockout win over Miguel Gonzalez in his opponent's native Chile, making him the mandatory challenger to the World Boxing Association (WBA) junior bantamweight title currently held by England's Kal Yafai. The hope was to end 2019 with a title shot, though Moloney settled for an interim title fight as Yafai angles for a unification match with World Boxing Council (WBC) title claimant and lineal 115-pound world champion Juan Francisco Estrada, with the two due to collide next January in Miami, Florida.

"I just want to enjoy some time with my family. I've been training ever since my daughter was born and I just want some rest," noted Moloney, who intends to reload with much needed rest and relaxation for the balance of the year.

"Once I'm back in the ring, I just want the best," Moloney said in eyeing the forthcoming Estrada-Yafai unification bout. "Whoever is there, bring 'em on."

The bout streamed live on ESPN+ in the United States and aired live on Fox Sports Australia.