A left hook to the body put Machado down and in no condition to continue, with the DAZN-streamed main event stopped at 1:01 of round three.

The rematch was eerily similar to its predecessor, when Cancio struggled out the gate only to rally back strong and stop Machado in four rounds this past February. The title-winning effort was no fluke as Machado suggested, originally attributing the shocking upset to struggles to make weight and—according to trainer Freddie Roach—perhaps even taking Cancio lightly last time out. 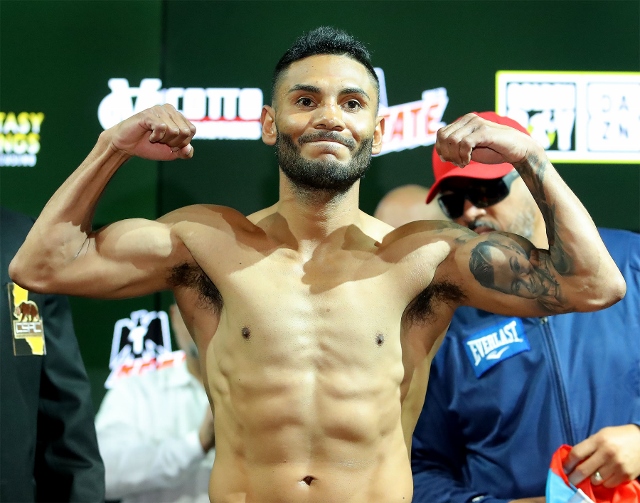 Machado put his 5’10” frame to proper use in the opening round, establishing distance and boxing well while Cancio connected with the crisper punches. Whomever won the frame remained wide open to debate among observers, but wouldn’t at all matter in the end.

What would—or looked to—matter was a cut above the left eye of Cancio, who was forced to spend all of round two fighting through blood but still managing to turn the tide.

“I knew it was above my eye. It wasn’t getting in my eye, so I wasn’t worried,” shrugged off Cancio. “A little bit of Vaseline took care of that. I proved it again. I’m a hard hitter.”

Machado’s efforts to turn a fight into a boxing match quickly dissolved, as did his energy level as he was visibily hurt and seemingly running on fumes by the end of round two.

“We had an excellent training camp. He just did his job,” Machado admitted after his second straight loss.

The sequence threatened to produce a near replica of the first fight, where Machado hit a wall after one round. Unlike the first fight, he didn’t have the benefit of landing a hard enough blow to drop Cancio and require time to recover.

Instead, it was Cancio who brought the heat beginning with his strong surge in round two and then looking to close the show even quicker than was the case nearly five months ago. Cancio seized the title with three knockdowns in the 4th round.

This time around, all it took was a single left hook to end Machado’s night one round earlier. Machado sought to catch Cancio upstairs, but left himself open for a clean body shot which forced him to a knee.

“He was going for the check hook upstairs,” observed Cancio. “His elbow was up, his body was wide open. I had the shot and I took it.”

Machado remained on the canvas as referee Raul Caiz Sr. ended the contest.

Now begins the important next steps for both fighters, whose two-bout set has forever changed their lives for very different reasons.

Cancio was believed to be done with the sport following a Sept. 2016 loss to Joseph Diaz Jr. Disgust with the direction of his career and issues with his former managers prompted him to get a real job, signing on as a construction technician with the Southern California Gas Company. Many of his co-workers were on hand, as were his adoring local fans amidst a sold-out crowd at the desert casino as he successfully lodged the first defense of the unlikeliest of title reigns now just four fights into his comeback.

Next up, he believes, is more old business.

“Rene Alvarado is waiting patiently as the number one mandatory,” notes Cancio of his old foe whom he stopped in the 8th round of their Dec. 2015 clash, also at this venue. “He’s waited long enough so let my cuts heal up.

“Rene Alvarado, Joseph Diaz, whoever is next, I’ll be ready.”

What won’t be next for Machado is another fight at 130. He took this bout against the wishes of his handlers at Promociones Miguel Cotto and Golden Boy Promotions, though admittedly needing to learn his lesson the hard way before moving on.

“I have to look into moving up to 135 pounds,” admits Machado, who won the title with an 8th round stoppage of an overweight Jezreel Corrales in Oct. 2017 and made two successful defenses before running into Cancio earlier this year. “I’m too big for this weight.

“It was always my intention to have this fight as my last. I took a risk in going after this rematch. It was his night so now we will look to see what we can do at lightweight.”

FYI, pbc is selling to ufc for 600 mil. They probably spent more than that building the brand. I hope this doesn’t happen to DAZN.

Puerto Rico needs a champ to hit that market. It keeps boxing alive there. That young kid from El Monte won’t go far. Whose next on the horizon?

[QUOTE=bigdunny1;19850177]So then it was Machado himself who refused to listen to Oscar or Cotto (his promoters). His people close to him Roach or his manager, his family members should of talked him out of this. Horrible decision.[/QUOTE]FACTS! Ultimately the blame…

[QUOTE=Bronx2245;19850167]I just read the article again, and it said the took the fight against the advice of Promociones Miguel Cotto and Golden Boy Promotions! So who are his "handlers?"[/QUOTE] So then it was Machado himself who refused to listen to…

[QUOTE=bigdunny1;19850159]Opposite. Golden boy wanted to make Cancio/Alvardo mandatory fight instead and have Machado move up and rebuild at 135. That was out the president of Golden Boy own mouth after the first fight. Then Machado and his team exercised the…