Mexico's Andres Gutierrez has been suspended by the World Boxing Council. The sanctioning body has also launched an immediate investigation into just why he arrived at the official weigh-in for his fight in Las Vegas, a whopping eleven pounds over the super featherweight limit.

During the recent WBC Annual Convention, a fight between No. 1 super featherweight contender Oscar Valdez of Mexico versus Andres Gutierrez No. 5 was approved, as a final eliminator to determine the mandatory challenger of the division. Waiting in the wings is world champion Miguel Berchelt, hoping to face the winner. 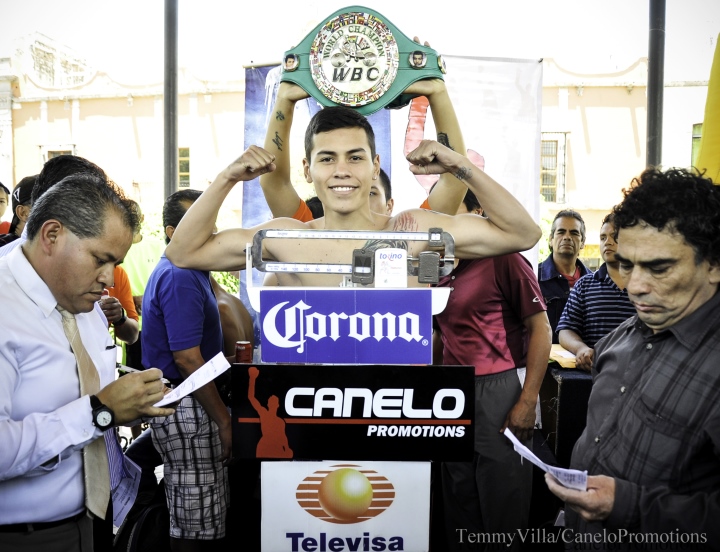 However, during Friday's weigh-in Gutierrez, arrived eleven pounds above the limit’s division. For what the WBC called an "embarrassing and extraordinary action" the sanctioning body started an immediate investigation, as he claimed to be inside the permitted limits at the 30, 15 and 7 days pre-fight weigh-ins.

“What just happened in Las Vegas is of extreme concern. Gutierrez weighs in eleven pounds over the weight limit in the WBC final elimination scheduled for super feather. Gutiérrez is officially suspended by the WBC and we will initiate a thorough investigation of the facts,” Mauricio Sulaiman, President of the WBC, stated

Oscar Valdez, who makes his debut at super featherweight, was 129.8-pounds. during the official weigh-in.

Gutierrez was replaced in the fight by Adam Lopez, who was scheduled to take part in a featherweight bout on the undercard. Lopez will face Valdez at 130-pounds.

I do not understand how so many mediocre Mexicans are lined up to fight for the WBC belts. Sulemain will NEVER let that " world title" belt leave Mexico.

[QUOTE=Shadoww702;20220051]Fair enough... And I’ll STFU now since I have no more arguments[/QUOTE] Don’t entertain that clown. Anybody saying “Mauricio did” are fooking dummies.. that’s why the guy works late night security shifts like the fatass he is. Mauricio only follows…

Uuhhmmm. I forgot to make weight. Somebody please never license this Mongoloid to fight again.

[QUOTE=historian larry;20219881]what is there to investigate???[/QUOTE] Truth be told, it is my fault. I sent 200 tacos, a 20 piece bucket of KFC and 30 bags of ruffles to his hotel room on Tuesday and labelled them Beyond Meat and…