Andre Ward Can See Canelo Stopping Kovalev; Must Get Inside

Andre Ward wouldn’t be the least bit surprised if Canelo Alvarez were to stop Sergey Kovalev.

Size advantage and all, Ward can visualize Kovalev having a very tough time fending off Alvarez if the Mexican middleweight works his way inside the taller, rangier Kovalev’s jab and attacks Kovalev’s body. Negotiations are ongoing for Kovalev to defend his WBO light heavyweight title versus Alvarez on November 2 in Las Vegas, but Kovalev is considered the clear front-runner to land that assignment.

Ward discussed the potential Alvarez-Kovalev fight during a meet-and-greet with fans while he was in London to call the Vasiliy Lomachenko-Luke Campbell lightweight title fight for ESPN+ on Saturday night at O2 Arena in London.

“I don’t have a definite answer, but I can see Canelo stopping him, man,” Ward said. “But the only question is how is he gonna get through the reach consistently enough? And then, if he goes up to [175], how much weight is he gonna put on? Is he gonna try to bulk [up]? Is that gonna slow him down? Is he gonna be a target now? I’ve got more questions than answers right now, so I don’t know. … I can see him stopping Kovalev. If he can get inside and stay inside, it’s gonna be a problem.” 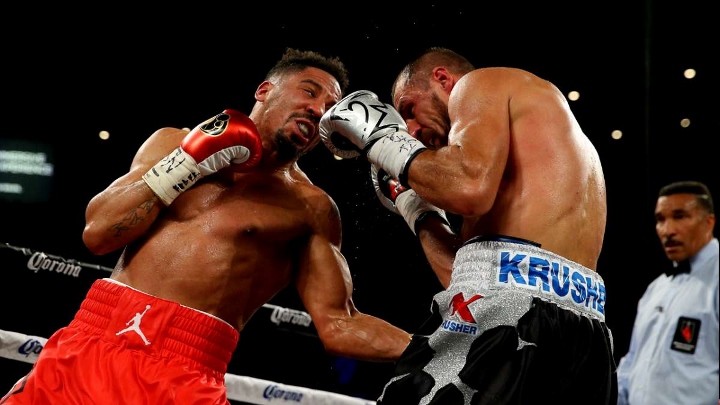 The 29-year-old Alvarez (52-1-2, 35 KOs) is seven years younger than Kovalev (34-3-1, 29 KOs), who has been stopped twice in his past six fights. Kovalev, who stands 6 feet tall, is four inches taller than Alvarez and has boxed within the light heavyweight division throughout his 10-year pro career.

The retired Ward’s opinions on all things Kovalev obviously are much more educated than most because they fought twice.

Ward was effective to Kovalev’s body, particularly during their rematch in June 2017. That closely contested fight was stopped in the eighth round, once Ward landed three consecutive borderline body shots that caused controversy after referee Tony Weeks halted the action.

Ward had hurt Kovalev badly with a right hand to his head about 50 seconds before their fight ended, however, and appeared well on his way to stopping Kovalev before connecting with those borderline blows.

In their first fight, Ward edged Kovalev by the same score on each of the judges’ cards (114-113) to win a 12-round unanimous decision in November 2016.

Of course he does. Cheaters support each other. ward is the dirtiest fighter in modern history.

[QUOTE=_Maxi;20038379]Why if there's no IBF involved though.[/QUOTE] im not saying ibf will impose the clause, but if there is one is going to be similar to ibf, like in the fielding fight...

A cording to Ward the testicles are located in a mans cranium...