Andrade: Sulecki Fight Will Show That I'm The Man at 160!

Demetrius Andrade has long sought to defend his title at home and become undisputed middleweight champion.

One dream has come true, which for now puts the other on hold as all of his focus and attention will be squarely placed on representing his corner of the world.

“It’s that time—wow,” Andrade (27-0, 17KO) said during Wednesday’s press conference to formally announce his long-overdue debut in his hometown. The event takes place June 29, when he defends his middleweight title versus Poland’s Maciej Sulecki, live on DAZN from the Dunkin Donuts Center in Providence, R.I. 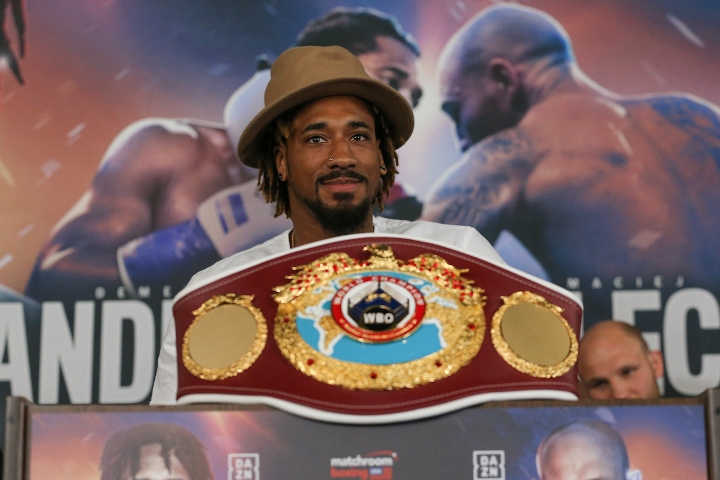 The 2008 U.S. Olympian and unbeaten two-division titlist has fought throughout the New England area, including his middleweight title winning effort over previously unbeaten Walter Kautondokwa last October in Boston. The closest that the southpaw has come to fighting in his hometown came in a trio of bouts in nearby Lincoln, R.I. earlier in his career.

That finally changes next month.

“It’s my homecoming, it’s an exciting moment for me, my family and my team. It’s a great honor to be headlining at home,” noted Andrade.

The bout will mark the second defense of his middleweight title, and his third ring appearance in just over eight months. The rate of activity—in addition to securing a hometown showcase—was among the goals set forth by the brass at Matchroom Boxing USA, with whom Andrade signed last summer.

“I have wanted to bring a fight to Dunkin’ Donuts since we signed Demetrius and this is the first World title fight in Rhode Island in 28 years,” noted promoter Eddie Hearn. “We need the city to get behind this event and this great Providence fighter, this is your opportunity to come out and support an elite fighter that is one of your own.”

The fight serves dual purpose for Hearn and DAZN, as the sports streaming platform holds prime real estate in the middleweight division.

All four major titles exist on this side of the street, with the other three straps—along with the World (lineal) middleweight championship—all owned by Saul ‘Canelo’ Alvarez, whom further unified the division following a 12-round win over Daniel Jacobs earlier this month.

“The WBO is the final link to undisputed,” said Hearn. “There’s a guy called Canelo with the other belts but you cannot be undisputed without this belt, and the winner on June 29 takes a step closer to being undisputed.”

Andrade’s brand can stand the marketing boost, as the 31-year old southpaw has settled for wins far more than has delivered thrilling performances. Part of it has to do with his ability to overwhelm his opponents, who in turn tend to shut down and offer little in return.

That won’t at all be the case with Sulecki (29-1, 14KOs), who is generally all gas and no brakes from bell to bell.

“Maciej is a good fighter, there’s no doubt,” Andrade notes of his next challenger, not at all even thinking about a potential clash with Canelo until he gets through this fight. “He’s had some tough grueling fights, he’s shown balls to win, but on June 29 that won’t happen. I’ve got an answer for everything he brings and this is my time – he’s got this far, but he goes no further – no one is stopping this train.

“I’ve been through a lot, people see me smiling but I’ve had to fight hard to be World champion, twice, and now I’ve got the chance to show my people what I do. The wolf is coming out, I’m breaking bones and biting hard – Sulecki comes to fight and that’s what I want, he’s going to show my skills off and show that I am the man in this division.”

[QUOTE=BoxngLove;19775728]U should probably reign it in some. Your lack of bredth and intellect is showing immensely. Ali is dead and MT is tripping on poison frogs and has not fought in a couple decades. 'household name' was a stretch, maybe…

Andrade doesn't prove he's "the man" at 160 til he beats the man at 160 which currently is Canelo. I'm not sure this fight proves anything other than he's not the potential man anytime soon if he loses.

Andrade is the biggest threat to Canelo and GGG at 160.

[QUOTE=alexjust;19769870]What is your definition of a household name? "Any boxer who happens to have a belt."? :sigh1::You_Rock_ Jeesus, what are your standards? To me a prime example of a household name would be Mike Tyson and Ali. You need to…

Sulecki is good but he lacks the power to beat the top fighters from the few fights I saw him in.