Andrade: I'm Looking To Become The First To Stop Sulecki

Demetrius Andrade doesn’t need to extensively watch and break down fight footage of Maciej Sulecki to get a sense of what he will do on fight night.

“I’m going to hit that big melon head of his,” the unbeaten southpaw bluntly stated ahead of his upcoming middleweight title defense this Saturday at the Dunkin Donuts Center in his Providence (R.I.) hometown. “He has a gigantic head! I can hit that sh*t all day with my eyes closed!”

Of course, there will be more to come of his scheduled second title defense this weekend, which will stream live on DAZN. The event will mark the third fight in eight months for Andrade (27-0, 17KOs), beginning with his title-winning effort over previously unbeaten Walter Kautondokwa last October in nearby Boston, Mass. 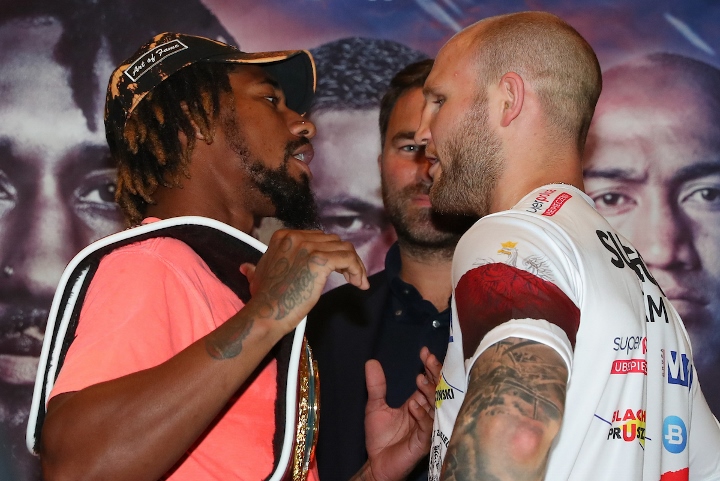 Wedged in between the title win and this weekend’s contest was his first defense, a 12th round stoppage of the normally durable Artur Akavov. Saturday’s fight carries a different meaning, as it marks the first time he fights in his true hometown, all while remaining near the top of desirable candidates to land a September showdown with World middleweight champion Saul ‘Canelo’ Alvarez.

So while a win is always the bare minimum of Andrade’s pre-fight expectations, the ultimate goal is to end the night showing his opponents something never previously experienced.

“I’m skillful and know what I’m doing in that ring. I’m good at figuring out your weakness,” notes the 6’1” southpaw, who represented the United States in the 2008 Beijing Olympics and remains unbeaten through more than 10 years as a pro. “I know Sulecki has chin, has heart and has courage. He gets knocked down, but always gets back up.

“When I get in there, I will make the proper adjustments to make all this happen. I don’t believe too much into a game plan. I believe in a strategy, how to break someone down. I’m not fighting Rocky Fielding, I’m not fighting Steve Rolls.”

The latter statement is a parting shot at divisional peers Alvarez and former titlist Gennadiy Golovkin. Fielding was handpicked to put his secondary super middleweight title on the line versus Alvarez, offering very little in getting steamrolled in three rounds last December.

The bout marked Alvarez’s debut on DAZN, as did Golovkin’s recent 4th round stoppage over Rolls, an unbeaten but unheralded fringe contender from Canada.

The October night ended with Kautondokwa handed his first defeat, along with his most recent bout in Janaury resulting in Akavov being stopped for the first time in his career.

That same goal applies versus Poland’s Sulecki (28-1, 11KOs), whose lone setback came in a competitive decision defeat last April to Daniel Jacobs, who went on to win a title in his next fight. The 30-year old contender has hit the deck before, including twice in his thrilling 10-round win over Gabriel Rosado this past March in Rosado’s Philadelphia hometown.

“Maciej Sulecki is a better fighter than Rocky Fieiding. He’s a better fighter than Steve Rolls,” insists Andrade, who—with a victory on Saturday—plans to openly challenge Alvarez, who remains without an opponent for his next fight. “When I get in the ring with that type of style – that style is a clash between that style and boxing, high ring IQ.

“This fight will show what I’m made of and what Sulecki is made of. Sulecki has a pattern of getting knocked down late in the rounds. I’m looking to put that to the test, and become the first guy to stop Sulecki.”

[QUOTE=Jab jab boom;19867706]didn't Gabe Rosado almost put sulecki out?[/QUOTE] He did, Sulecki looked worse and worse, he takes way too many punches with his head, his punch resistance is gone and he just comes from an injury. He will be…

[QUOTE=JuniorTorres720;19867623]Bold statement because Sulecki has proven to be a durable fighter. Even Jacobs who is a top 3-5 middleweight couldn't put a dent on him. I expect Andrade to win but it won't be easy. He'll have to stay busy…

Bold statement because Sulecki has proven to be a durable fighter. Even Jacobs who is a top 3-5 middleweight couldn't put a dent on him. I expect Andrade to win but it won't be easy. He'll have to stay busy…