Andrade: I Made The Right Move Over Coming To DAZN

Demetrius Andrade has no desire to dwell on the past. Instead, he’s used it as lessons to assure he enjoys a better future.

The unbeaten two-division—and reigning middleweight—titlist will get to enjoy a true homecoming for the first time in his Providence (R.I.) hometown, as he makes his second title defense versus Poland’s Maciej Sulecki. Their bout takes place this Saturday at Dunkin Donuts Center in Providence (DAZN, 9:00pm ET/6:00pm PT).

“It feels good to be able to fight in front of my (hometown) fans seeing me live in person instead of at home on TV,” notes Andrade (27-0, 17KOs), who has fought throughout the New England area, but never closer to home than nearby Lincoln, RI in his first year as a pro. “I want to be at T-Mobile Arena in Las Vegas fighting Canelo (Alvarez in September), don’t get me wrong. But I love fighting at home.” 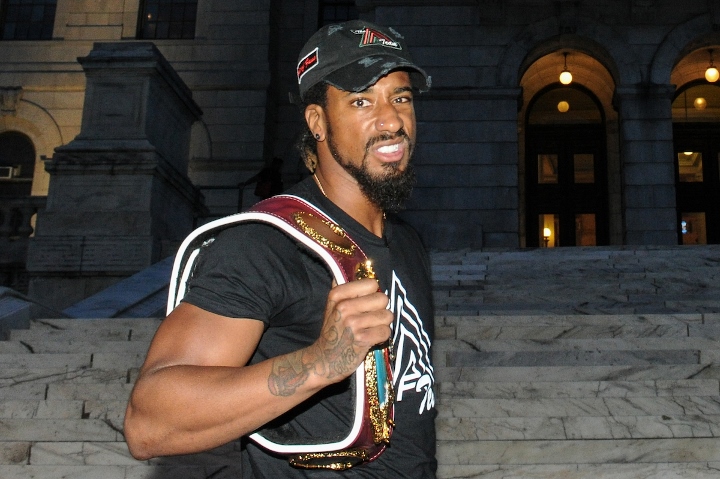 Upon turning pro shortly after the 2008 Beijing Olympic as part of the U.S. boxing team, Andrade signed a co-promotional pact with Banner Promotions and Star Boxing. Both companies had his best intentions in mind earlier in his career, but somewhere along the way came issues with securing fights and remaining active.

Through their nine years together, Andrade managed to enjoy two tours as a super welterweight titlist. His first reign came to an unceremonious ending, as the title he won in a Nov. 2013 decision over Vanes Martirosyan was stripped from him just 19 months later, in which period he made just one title defense.

Contributing to the inactivity was his walking away from a scheduled Dec. 2014 title defense versus then-unbeaten contender Jermell Charlo—who has since won and lost a title—which would’ve nabbed him a $550,000 payday as part of a three-fight deal with Showtime.

After working things out with his team, Andrade found his way to another title. It required his hitting the road for a March 2017 win over Jack Culcay in Germany, settling for a split decision win. It would be a one-and-done affair, as Andrade soon moved up to middleweight, scoring a non-title win over unbeaten Alantez Fox in his last fight with his old team before resurfacing last summer with Eddie Hearn and DAZN.

By that point, the 6’1” southpaw gained a reputation as a highly skilled but largely unmarketable fighter. Not helping that image any, was his being denied the opportunity to fight where everybody knew his name.

“When I was young, I signed a contract with promoters and their job was to put me in the ring. When they don’t put me at home, then I don’t get to fight there,” Andrade explained of his not enjoying a homecoming any sooner than this weekend. “So through that learning curve, I made sure when I signed with Eddie Hearn and DAZN, I made sure to put that in my contract.”

Saturday’s title fight marks the first in Providence since the region’s biggest draw, former two-division titlist Vinny Paz (formerly Vinny Pazienza) defended his 154-pound strap in a points win over Gilbert Dele at this very venue (then known as the Civic Center) in 1991.

It was the third career title fight at home for Paz, a wildly popular attraction before and after his near-fatal car crash in which he suffered a broken neck just one month after his win over Dele.

“Vinny Paz had (longtime local promoter) Jimmy Burchfield, the hardest working guy in the business working for him,” Andrade notes of the massive difference in promotional hustle behind their respective careers. “As far as sitting down with (Banner and Star Boxing) and asking why it never happened… it’s in the past. I don’t remember, and I don’t care.”

Rather, he focuses the good that has come with the decisions he’s since made that were crucial to the betterment of his career.

“It shows that I made the right move coming over to DAZN,” notes Andrade, who headlines on the sports streaming platform for the third time in just over eight months, beginning with his vacant middleweight title win over unbeaten Walter Kautondokwa last October in nearby Boston. ”It’s great for myself, for boxing and the future of the middleweight division.”

[QUOTE=THEFRESHBRAWLER;19864658]You’re a troll in the red why should I take you serious.. He talks about it all the time just because YOU never heard him doesn’t mean it’s not true. You just became a boxing…

comments were just as i imagined

[QUOTE=Frankie2Jabs;19864133]Nope. Charlo didn’t address any of that when Andrade ganged up on both brothers. If someone “ducks” you, you always mention it, no different the way Wilder says it. What’s your next fabrication?[/QUOTE] You’re a troll in the red why…

[QUOTE=Shadoww702;19863466]The quicker he wins and the better he looks helps us get Canelo vs. Andrade for all the belts.[/QUOTE]Yes, indeed!

[QUOTE=THEFRESHBRAWLER;19863436]It was his highest payday he then went on to fight for lesser money. And Charlo has said many times that’s Andrade ducked him. It isn’t no secret that he ran to hbo when he was offered his highest pay…