PROVIDENCE, R.I.—Demetrius ‘Boo Boo’ Andrade was still a few months away from his 4th birthday when the last major title fight hit his Providence hometown.

His memories of Vinny Paz (then Vinny Pazienza) claiming the super welterweight title in Oct. 1991 are largely limited to replays and press clippings. The same can be said of his generation of boxing fans who’ve long craved a big event to hit Providence.

More so than angling for a superfight with Saul ‘Canelo’ Alvarez and Gennadiy Golovkin, the opportunity to create new memories meant the world to the unbeaten middleweight titlist.

“The last time there was a world championship fight here was 25-30 years ago,” Andrade (28-0, 17KOs) observed after his 12-round points win over Poland’s Maciej Sulecki in their DAZN headliner Saturday evening in front of 7,136 in attendance at Dunkin’ Donuts Center. “For my generation who hasn’t had a chance to see elite boxing (locally), it was great.

“DAZN has done a terrific job in bringing these fights to different locations.” 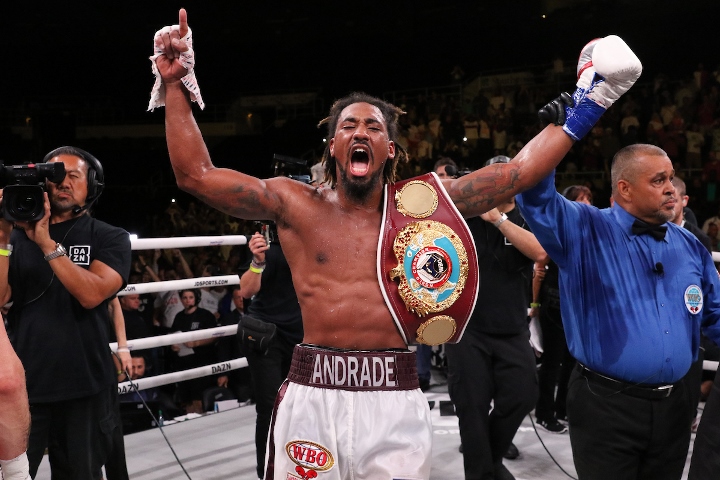 It was fitting that Providence’s current favorite son played the same venue that once regularly played host to 10,000 Pazmaniacs in attendance for Paz’s past appearances back when it was still the Providence Civic Center. Paz’s title win over Dele became more memorable in the aftermath, as it was his final fight before suffering life-threatening injuries in a near-fatal car crash.

Paz not only survived but lodged a miraculous ring return although never quite soaring to the heights he reached during his heyday in the 1980s and early 1990s. Still, it was a teachable moment to not take any portion of life for granted, something not at all lost on Andrade, a 2008 U.S. Olympian and three-time titlist in two weight divisions who remains a pillar of his community – out of and, after Saturday, inside the ring.

“Every year, we give away thousands of book bags and school supplies,” noted Andrade, whose full embrace of his environment came complete with riding a Metro bus to the venue ahead of his second middleweight title defense. “Every Thanksgiving, we’re giving away thousands of turkeys to those in need.

“I love giving back to my community and it means everything that we were able to make this homecoming happen.”

Incredibly, it was the first true hometown appearance in Andrade’s 11-year career. He’s fought elsewhere throughout the New England area, including his 12-round win over previously unbeaten Walter Kautondokwa to win the vacant middleweight title last October in Boston, Mass. The goal amongst his team was to make a homecoming happen in 2019.

Given the results of the long overdue debut, it definitely won’t be a one-and-done affair.

“That atmosphere was electric tonight. It’s not rocket science. When you bring a fighter to Providence, one of their own, what are they going to do, not respond? You can’t stick Demetrius in Los Angeles and expect this type of response. But here in his past two fights (in New England), he’s proven that he has a fan base willing to support his shows.”

The hope is that he continues to develop as a major regional draw, while also using his newfound popularity along with his alphabet title as bargaining chips to finally land the likes of Alvarez and Golovkin.

Until then, more of the same please.

“Overall, it was great to walk into an arena and hearing fans yelling Boo Boo,” noted Andrade. “I did my best to stick to the gameplan, not pay attention to the crowd. A lot of fighters get caught up into that. I’m not like that, I’m experienced.

“But to hear the name Boo Boo during my fight, it’s a great feeling, a lot better than fighting where nobody’s cheering me on.”

Now armed with a promoter who wants to build him into a superstar, a platform with deep pockets and an activity level he hasn’t enjoyed in years, the sales pitch becomes a little easier with each fight.

“In the past people didn’t want to fight him because he’s too good,” notes Hearn. “Now there’s no more excuses. He’s got a belt. He’s got fans. He’s got a broadcaster. I’m going to put pressure on them to make these fights happen and not wait around for them.”

He should be in politics not in boxing, talk too much and no action!:firedevil

Now that he has a promoter who knows how to advance his clients careers hopefully Hearn can get him some real fights - even if it’s against a Derevyanchenko or Jacobs - in other words - a name fighter. It…