Eddie Hearn has revealed that the return of Amir Khan this weekend is a sell-out.

Khan fights in the UK for the first time in five years on Saturday when he takes on Phil Lo Greco at the ECHO Arena.

The fight, a 12-round catchweight contest at 150 pounds, tops a card billed ‘Back To Business’ which is being put on by Matchroom Boxing and showcases a whole host of local talent. 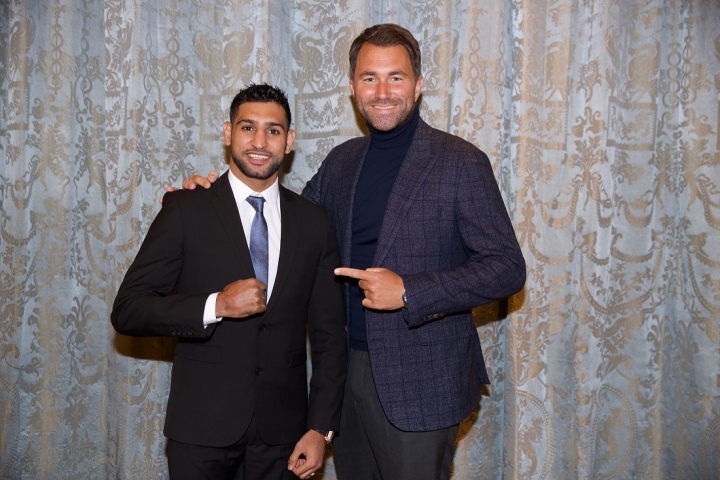 And promoter Hearn expressed his delight at the fact that ‘King’ Khan’s first outing in nearly two years –– after being in the I’m A Celebrity jungle and losing to Saul ‘Canelo’ Alvarez back in June 2016 –– has attracted such a big following.

“It’s been a while since we’ve sold a show in Liverpool as well as this one and I think it shows how big a star Amir still is in British boxing that he has sold 9,000 tickets for his comeback fight,” Hearn told Boxing Scene.

“The Liverpool public have, as always, done themselves proud ahead of a great night of boxing in one of the best fight cities in the UK this weekend.

“I got that beautiful phone call from the ECHO Arena late on Wednesday night to tell us we’re completely sold out. We’ll have a full house in to witness the return of Amir Khan, one of the all-time British greats who is fighting back in the UK for the first time in five years and I’m so excited to be putting on the fight, but not just that, the great supporting cast.

“There is some great young talent on the undercard and championship fights, too, and to be back in Liverpool is brilliant.

“Amir Khan is still a huge star and that has shown, but there are opportunities on this card for some of the young local fighters to become stars and push on towards title level.”

Former Team GB trio Qais Ashfaq, Scott Fitzgerald, Anthony Fowler will see action alongside Natasha Jonas as the former 2012 Olympian vies for her first title in the paid code when she takes on Taoussy L’Hadji for the vacant WBA International female super-featherweight title.

Sam Eggington returns from defeat and makes his debut up at super-welterweight, Tom Farrell continues his climb back into title contention, while Craig Glover features alongside Osman Aslam and Conor Benn fights in the city for the first time.

[QUOTE=GlassJoey;18685871]i suspect you’re correct about there being some dodgy deal for resale tickets but if you actually watch a Matchroom show, you’ll see they’re sold out or close to sold out every time. Other promoters don’t manage the same sales…

I live in Liverpool and I can tell you that this fight has a lot of buzz about it here. I don't know why. Not a lot of big fights are held here so that could have something to do…

[QUOTE=Corelone;18686565]Cheap beer helps.[/QUOTE] The two things that are sold out are Khan and the beer!