Amir Khan is well aware of the public perception that has him as a longshot to unseat reigning welterweight champion Terence Crawford.

It’s why he’s determined to put his best foot forward ahead of their April 20 clash, which includes reassembling his old team. 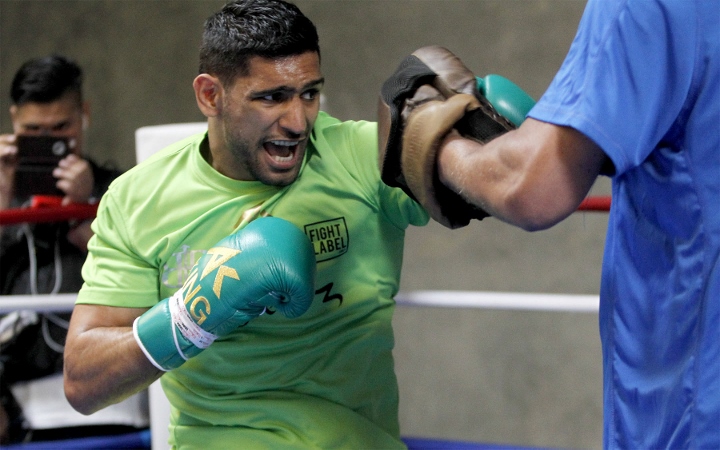 Khan is currently 5-1 with Hunter in his corner, the lone loss coming in an ill-advised move up the scales in a May ’16 challenge of World middleweight champion Saul ‘Canelo’ Alvarez. The bout took place at a catchweight of 155-pounds, eight more than Khan (33-4, 20KOs) had ever weighed for a prize fight and in which he was knocked out in six rounds.

Two wins have followed, both coming in 2018 but without the services of Hunter who was forced to temporarily step away from boxing after suffering a major health scare.

“I’m going to be training back with Virgil Hunter for this fight,” Khan confirmed during a press conference held Tuesday in London to formally announced his forthcoming clash with Crawford (34-0, 25KOs). “He was a little sick or my last two fights, that’s the only reason I didn’t go back to him. He knows I can win this fight and that’s why he’s working with me.”

The timing of Hunter’s illness just happened to coincide with Khan’s return to the ring after having sat out all of 2017. His first fight back came last April, under the watchful eye of famed cornerman Joe Goossen, whom guided the Brit to wins over Phil Lo Greco and later in September over Samuel Vargas.

However, once talks arose of his 2019 campaign, Khan reached out to his old trainer to ensure that he’d be along for the ride—particularly in one of the toughest fights of his career, as in Crawford he faces an unbeaten three-division titlist whom many regard as pound-for-pound the best boxer in the world.

“It will be nice to get back with Virgil Hunter,” Khan states during a press conference held Tuesday in London to formally announce his forthcoming clash with Crawford (34-0 25KOs). “He was sick, which was why I had to move with Joe Goossen who is also a great trainer.

“The only fight we lost together was with Canelo. He’s a bigger guy, but even that we were still winning with our skills before I go caught with a big shot.”

Aside from the loss to Alvarez, Khan has otherwise been perfect following his 140-pound title reign. He’s gone 7-1 since losses to Lamont Peterson and then Garcia in consecutive title fights, including a trio of wins over former titlists Luis Collazo, Devon Alexander and Chris Algieri, all coming in succession within a span of just over 12 months.

“In the 147-pound division I am unbeaten,” points out Khan, who is 5-0 in bouts at or just outside the welterweight limit. “From the Collazos to the Alexanders, I am unbeaten against those guys.

“Also, Crawford is a switch hitter but he’s a southpaw. I’m undefeated against southpaws and I’m confident that I can win this fight.”

One big adjustment he plans to make while reuniting with Hunter is avoiding the temptation to stay too long inside Crawford’s lethal punching range.

“It’s something (the team has) been working on for the past couple of fights,” Khan notes. “If you don’t have to be in the pocket, you can box form the outside. I need to work on it even more.

“I’m still not that complete fighter, and these are things we will work on when I go back to training camp. The ideal sparring for Crawford will be a good southpaw and a good orthodox fighter, although so many are switch hitters. It shouldn’t be hard to find good ones, especially in America where the quality is so much better. My coach is already on that.”

Khan shuda stayed with Roach....Khan offense gonna always be his defense. And no trainer is gonna grow him a chin. Atleast with Roach either u knocked Khan out or Got lit up (exp. Lamont)

[QUOTE=soul_survivor;19435094]Khan should have stuck with roach.[/QUOTE] No trainer can make Khans chin any better.

Khan should have stuck with roach.