Amir Khan: If I Lose To Lo Greco - It's All Over For Me

Amir Khan fights in Britain for the first time in five years on Saturday and admits that a loss will end his career for good.

Khan faces Canadian Phil Lo Greco in Liverpool on Saturday 23 months after he was beaten by Saul 'Canelo' Alvarez in Las Vegas, and five years since he last fought on these shores against Julio Diaz in Sheffield.

Khan, who buried the hatchet with promoter Eddie Hearn to sign a three-fight deal with Matchroom, admits watching high-profile fights in Britain from ringside partially motivated him to return. 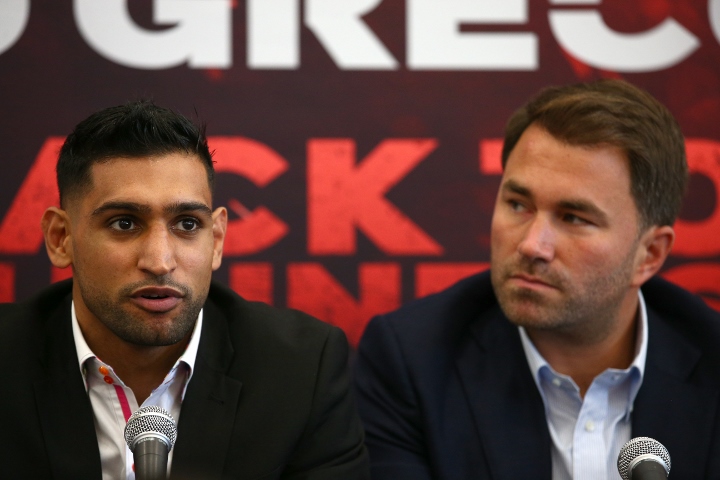 Khan not only wants to win, but he wants to win in style to further his career. But losing to someone like Lo Greco would end his comeback in one fight.

“I have to win and win well,” said Khan to The Daily Telegraph.

“I intend to put on a clinic and dismantle Lo Greco, he is not on my level. If I have to go 12 rounds, so be it, but defeat is not an option. My ambition was to come back and win another world title, and if I can’t win against Lo Greco, it’s all over for me.”

Hearn agrees with Khan's viewpoint on the bout.

“He’s fighting for his career, that’s the top line of this promotion. There are huge fights ahead for Khan – Kell Brook wants to fight him, Errol Spence wants to fight him, so does Terence Crawford, Keith Thurman, they all do. We’ve had talks with Top Rank about Crawford. We will have to see what Amir Khan has left. The truth is that no one knows," Hearn said.

When it comes to Khan, the talk tends to revolve around the possibility of a grudge match with fellow Briton Kell Brook, another boxer that is promoted by Hearn.

Brook will be at the Echo Arena on Saturday to see Khan's comeback up close and his opponent Lo Greco is convinced the 2004 Olympic silver medallist's best days are behind.

I have mix feelings here because I really think khan thinks is this mega star, and maybe he was or is,but not in america, fighting greco is horrible, not so much for the tune up, but they way he talks…

IMO, If Khan wins here he should go right into the biggest payday of his life with Kell Brooks...and then retire. That said, I doubt that it happens. Kahn just can't seem to give up the razor slim chance of…

If he gets beat we'll hear about the 'hand injury' in training or the 'bug' he caught 2 weeks out or something. No way he'd retire. What else is this potato-brained tool going to do? The clown didn't even know…

[QUOTE=Nomadic;18687993]It's been over sweet chin boy. You'really the only one who hasn't got the memo.[/QUOTE] I have to say it is harsh but funny.God forgive me for laughing out loud .