Not even the allure of more money and a major domestic fight at Wembley Stadium could convince Amir Khan to face Kell Brook next.

Multiple sources have told BoxingScene.com that Khan has decided to instead challenge Terence Crawford for Crawford’s WBO welterweight title.

England’s Khan, 32, has informed promoter Eddie Hearn of his decision. Crawford’s promoters at Top Rank Inc. also have been made aware of Khan’s choice.

An official announcement of Crawford-Khan is not expected until later this month. 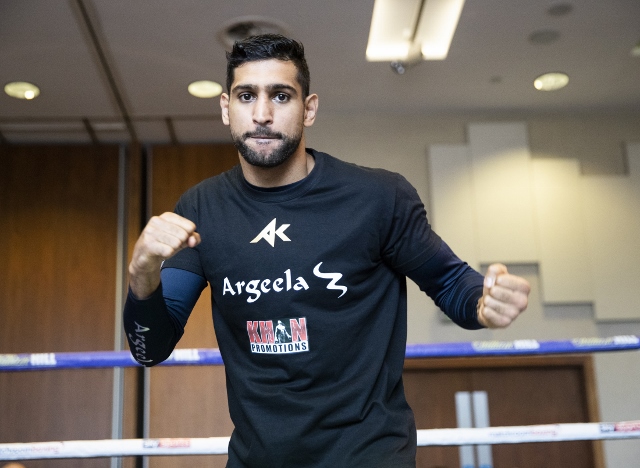 The target date for Crawford’s next fight had been March 23, but that would’ve meant scheduling another pay-per-view show the Saturday night after Errol Spence Jr. and Mikey Garcia will square off in a FOX Pay-Per-View main event March 16 at the Dallas Cowboys’ AT&T Stadium in Arlington, Texas.

Khan has lost by knockout or technical knockout three times, but the British star dropped Collazo three times on his way to a 12-round, unanimous-decision win over Collazo in May 2014 in Las Vegas.

Top Rank had tried to secure Danny Garcia as Crawford’s opponent prior to reaching out to Collazo.

They later offered Khan a $5 million guarantee to face one of the best boxers in the sport.

Hearn wanted Khan to box Brook because that was the third bout they targeted when the former IBF/WBA 140-pound champion came to terms a year ago on a three-fight contract with Hearn’s Matchroom Boxing. Hearn even explored the possibility of staging Khan-Brook at Wembley Stadium in London on April 13, the date that has been reserved for several months for heavyweight champion Anthony Joshua’s next fight.

Ultimately, the 2004 Olympic silver medalist’s intense dislike for Sheffield’s Brook (38-2, 26 KOs), coupled with his desire to try to upset Crawford, made him choose Crawford.

Khan could’ve earned eight figures for facing Brook in what would’ve been a lucrative pay-per-view fight in the United Kingdom.

Bolton’s Khan could make up at least some of the difference by keeping much or all of the British pay-per-view revenue from the Crawford fight. He would’ve had to split that money with Brook had they fought.

The Crawford fight will mark the end of Khan’s three-bout deal with Matchroom Boxing.

[QUOTE=JWHardin;19412567]I'm not even a so called expert, but feel I have enough boxing knowledge to see this fight as it is. Khan will come out strong and fast the first few rounds, may be ahead mid way, then its all…

Date makes sense. Gonna take A LOT of weed to make me think Khan has a chance.

Khan can't beat any elite welterweight. He should just try cutting fat move back down to 140. He will never fight Brook because he knows that deep down, he will lose, and it will kill him to lose to Brook…