The long-awaited Battle of Brooklyn ultimately gave the crowd its money’s worth, even if not as competitive as it was fierce.

Defending featherweight titlist Heather Hardy has never been short on heart whether in a boxing ring or a mixed martial arts octagon. It was on full display, but unfortunately nowhere nearly enough to slow down the attack of Amanda Serrano who claimed a 10-round decision Friday evening at Madison Square Garden’s Hulu Theater in New York City.

Scores were 98-91 (twice) and 98-92 in favor of Serrano, who is now an eight-time titlist in seven weight divisions following her latest conquest.

Serrano needed just 35 seconds to claim her last win, in this very building when she tore through Eva Voraberger to extend her own record in winning a seventh divisional title all the way down at super flyweight. 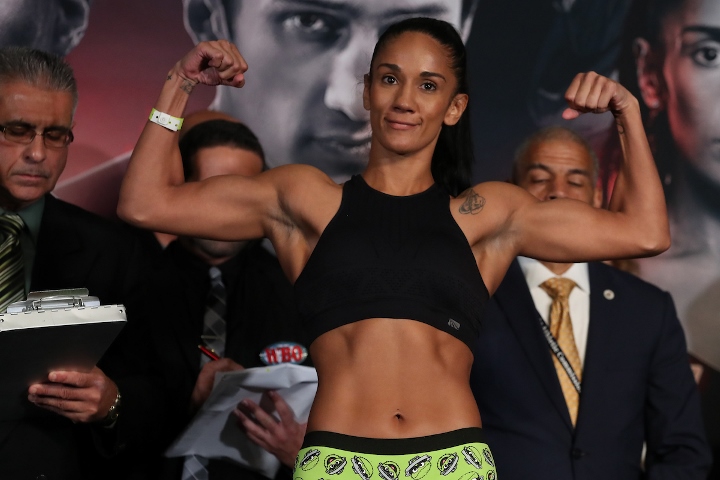 Friday’s chief support threatened to not go much longer, with the Puerto Rican southpaw immediately taking the fight to Hardy. Combination punching was on full display within the first minute, leading to a power punching showcase as Serrano repeatedly rocked Hardy with right hooks and straight left hands upstairs. Early rabid chants for Hardy quickly segued to genuine concern, with even several members in press row screaming for referee Michael Ortega to stop the contest.

Action waged on, with Hardy subtly improving with each passing round even if still more will than skill for the most part. Blood from her nose was well contained by longtime noted cutman Danny Milano, in effect keeping the Gerritsen Beach-based boxer in the contest for as long as it lasted. Serrano continued her two-fisted attack in round two, with Hardy enjoying pockets of success in round three, though not enough to sway the three judges—all female (Julie Lederman, Waleska Roldan, Robin Taylor), a worthy footnote to the long-demanded matchup.

Serrano remained poised as the threat of a knockout dissolved with passing rounds. It resurfaced in round six, however, when a shot upstairs forced Hardy to spit out a chunk of blood. The exiting titlist continued to fight through the pain in round seven, managing her best sequence of the fight in catching Serrano with a looping right hand to the chin followed by a left hook to the temple.

As action entered the championship rounds, Serrano continued to control the action but her face also bearing the marks of a grueling affair. It never discouraged the Bushwick-based pound-for-pound entrant, in fact closing out strong. Serrano attacked the body while working her long left hand upstairs, with Hardy biting down as well as she could to return fire and give the crowd cause for applause by night’s end.

Serrano improves to 37-1-1 (27KOs) with the win, also beginning her second tour as a featherweight titlist. Hardy falls to 22-1 (4KOs), her title reign closing without a single successful defense after winning the belt in a 10-round win over Shelly Vincent in this very venue last October.

“Heather is as tough as they come and she’s a champion for a reason,” noted Serrano in admiration of her longtime crosstown friendly rival. “She came to fight, but I was the better girl tonight. She’s just not on my level yet.”

Her next targeted opponent certainly isn’t short on talent or determination.

Upon signing a three-fight deal with DAZN through promoter Lou DiBella, the last of that pact was to come in a super fight with Ireland’s Katie Taylor, a 2012 Olympic Gold medalist and reigning undisputed lightweight champion. Those plans were delayed when Serrano struggled to get the second fight of her contract on the books before landing on a fight date with Hardy, while Taylor has already managed three fights in that span.

The most recent for the Irish superstar nearly resulted in her first loss, surviving a major scare from Belgium’s Delfine Persoon to claim a 10-round majority decision to collect all four major lightweight titles this past June.

She has since discussed a possible move up to 140 pounds in a bid to become a two-division titlist.

Having herself claimed titles from super flyweight (115 pounds) all the way to the 140-pound super lightweight division, that won’t at all serve as a barrier.

“Katie Taylor wants 140, so we will see what she wants to do,” pointed out Serrano, though not willing to let the fight slip away. “No matter what weight, I’ll win.”

The bout served as the chief support to the interim lightweight title fight between unbeaten contenders Devin Haney (22-0, 14KOs) and Zaur Abdullaev (11-0, 7KOs).

That beat down was almost as brutal as Heather's last MMA fight.

Disappointed you? Lmao, you truly don't know about boxing. Serrano out smart and boxed Hardy on all 12 rounds. Oh, by the way, Hardy lost the undefeated mark.

Respect to both fighters. Somebody needs to teach Hardy how to tie up and not be so stationary as she was at the start. Down the stretch she was more relaxed and having a lot more success than i though…