Amanda Serrano: Plan Was Always To Move Back Up In Weight

From the moment she agreed to enter a three-fight pact with DAZN, the end game for Amanda Serrano has always been a craved superfight with Ireland’s Katie Taylor.

The plan to get to that point, however, has always been to gradually make her way back to lightweight—unlike the steps taken for her last fight.

The Puerto Rican southpaw returns to featherweight in hopes of a second title reign as she faces unbeaten titlist Heather Hardy (22-0, 4KOs). The battle of Brooklyn-based boxers takes place Friday evening at Madison Square Garden’s Hulu Theater in New York City. The bout is the second straight at the venue for both boxers, with Serrano having claimed a super flyweight title in her last outing this past January—just four months after having won a title at 140 pounds.

“Fighting at 115 pounds my last fight, I didn’t want to jump straight to lightweight,” Serrano (36-1-1, 27KOs) told BoxingScene.com of the process in returning to featherweight before making her way back to 135 for a shot at Taylor’s undisputed lightweight championship. “Everyone thought I was crazy for dropping so far down in weight for my last fight—and maybe I am! But there was always a plan in place to move back up in weight, but not all the way to 135.

“So the idea was to fight somewhere in the middle. We knew right away that we would next fight (at or near) featherweight. We’re just grateful to fight a reigning champion for my next fight.” 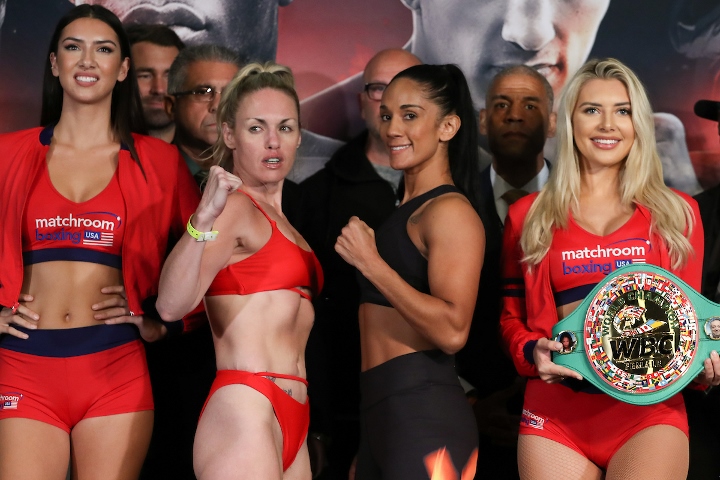 Serrano continues to add to her own history, holding the record for all female boxers as well as any gender boxer from Puerto Rico with title wins in seven weight divisions. Three of those came within her last five starts, her two most recent outings serving as the bookends for that run with title wins at super lightweight and super featherweight.

All but one of such conquests, however, have come in vacant title fights. The allure of facing Hardy served several purposes, moreso than the marketing ploy of claiming the two vie for the ‘Queen of Brooklyn’ crown—Serrano was raised in Bushwick, while Hardy hails from Gerritsen Beach—but the type of fight where a win can truly build momentum towards a superfight.

“As WBO (World Boxing Organization) super champion, I have the benefit of fighting for any WBO title I want,” notes Serrano, with all but one of her wins coming under the auspices of that sanctioning body, whose belt is at stake on Friday. “We didn’t want to fight for another vacant belt, we wanted an actual champion, so that’s why we chose Heather Hardy.

“I’m grateful that Heather agreed to defend her title against me. It’s no disrespect that we chose her. Heather Hardy is as tough as they come. We know she wasn’t going to back down and is going to come to fight.”