It might not be fair that women’s boxing struggles for an audience in the US but for now it remains a reality.

There was a time when women’s MMA wasn’t really on the radar. Names like Carano, Rousey, and Cyborg helped to change that. So did the structures they had around them. MMA leagues/organizations work from a relatively more stable foundation than boxing does.

It’s still, in large part, a game of everyone for themselves with what structure there is provided by promotional outfits. There are no leagues. There is no central ruling body. It’s one of the most capitalist of all sporting ventures. At the very top of the ladder, it can mean the sort of payday that draws one of MMA’s biggest names over, in his prime, to take an inevitable loss (Mayweather-McGregor).

Below the top of the ladder, there is a thin middle class and everyone else trying to leap past them.

Women’s boxing in the US market hasn’t found the right star to truly cross over into mega-payday stardom. It doesn’t mean it can’t. There have been flickers in the past of what might be. Cathy Davis graced the cover of Ring Magazine in 1978. Christy Martin crashed the cover of Sports Illustrated in 1996. Laila Ali was a pay-per-view fighter for much of her career after appearing on the cover of TV Guide prior to her fight with Jackie Frazier.

It hasn’t been enough to sustain an audience and make lasting believers. There has been ample discussion of late about the pay gap between men’s and women’s boxing but it sometimes ignores an obvious point.

There is no equal pay in boxing for anyone.

Being a welterweight champion doesn’t automatically pay more or less than lightweight or heavyweight. Networks sometimes subsidize certain fighters at more than they might be worth in the moment as a long-term investment but the biggest money is about who can draw the most eyeballs.

More equality can be achieved in the chance to cultivate more eyeballs.

For years, women were absent from largely outlets like HBO and Showtime and their pay-per-view arms. 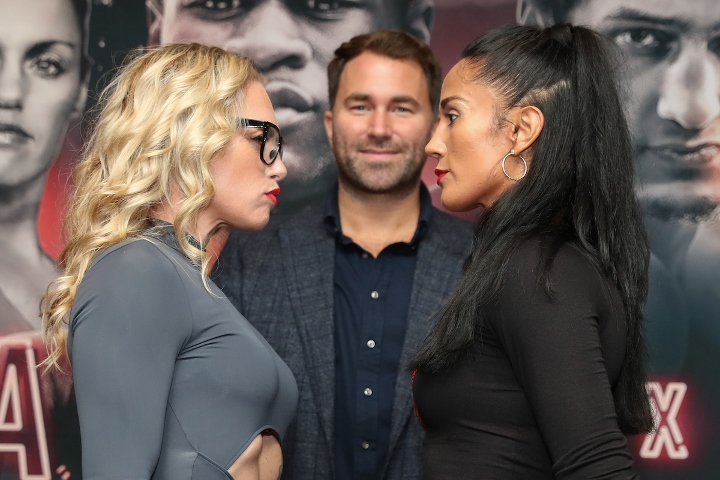 The investment being made in several fighters right now is encouraging. Showtime has put some real effort behind Claressa Shields while her Olympic teammate Mikaela Mayer has been well featured by Top Rank. Ireland’s Katie Taylor has been visible on both sides of the Atlantic. Prior to their exit from boxing, HBO showcased excellent women’s welterweight champion Cecilia Braekhus as well as Hardy.

This weekend, on the undercard of Devin Haney-Zaur Abduallaev (DAZN, 7 PM EST), some more spotlight is there to be had and perhaps stolen.

Hardy is 2-2 in the MMA world. Serrano has also crossed the street and is 2-0 in MMA. Clearly, both women just love to fight. Hardy showed that to the world in no better fashion than her 2016 war with Shelly Vincent. Serrano likes to go home early when she does her fighting. Since a pair of consecutive decision wins in 2015, Serrano has scored knockouts in nine of eleven contests with five knockouts in the first round.

It’s the sort of fight anyone can get excited about once they get to know who the competitors are the kind the women’s game has been and needs to keep delivering more of. While every fight won’t turn out to be a gem, matching recognizable names or fighters at the top of their divisions, and letting people know when they are on and where to watch, is the beginning of more audience.

Consistent quality matchmaking is another ingredient often missing the past. We never saw Martin fight Lucjia Rijker. Ali seemed to want nothing to do with Anne Wolfe. Instead, we got things like Ali-Martin in a mismatch of size and primes that felt more novelty than novelesque.

This year, we’ve seen Shields-Christina Hammer in a middleweight unification bout and Shield seems to be edging down the scale toward Braekhus. We saw Katie Taylor get a little lucky on the scores against Delfine Persoon in one of the best fights of the year so far. She owes Persoon a rematch but would anyone object to Taylor-Serrano if the Puerto Rican wins on Saturday?

Serrano is a former WBO lightweight titlist after all, one of the four belts Taylor currently holds.

She’ll have to get through Hardy first. No one has done that in a boxing ring yet. Hardy can’t crack with the same authority as Serrano but she’s tenacious, experienced, and used to going the distance.

It’s the sort of scheduling that will, over time, earn more and more fans. Good matches feed the only question that ever really matters: who’s next? Fans want to see fighters they have grown to respect fight others and see who will win. The more matches fans are curious about, the easier it will be to feed the next one down the line.

Whether there will ever be an equivalent to a Floyd Mayweather at the ticket counter seems a question far away from needing to be asked.

For now, growth is the game and there is plenty of room for that.

Tyson Fury beat Wladimir Klitschko and that’s all he really needs for his claim to the lineal throne. However, if he’s the champ, he should be expected to defend his claim against real contenders. Wilder rematch next year or not, few other fighters of Fury’s stature would get away with the two opponents he’s had this year without more widespread criticism…Haney-Abduallaev could be a better fight than most see coming. Abdullaev can scrap…Young Justice Season 3 was almost worth the near multi-year wait and season four should continue the fun…Anyone who isn’t excited about Alvarez-Kovalev is lying about not being excited. Add that to the likely Estrada-Yafai match and DAZN has a very strong calendar from October through the end of 2019…Errol Spence and Shawn Porter did a great job selling their fight in their face-off portion of the promotion.