With one punch, one brutal left uppercut, Alexander Povetkin turned defeat into victory, wrecked the dreams of Dillian Whyte and put himself in line to be crowned heavyweight champion of the world in his Forties.

He also removed one of the major obstacles to a Tyson Fury-Anthony Joshua fight.

For four rounds, in the final fight of Eddie Hearn’s Fight Camp, Whyte looked a certain winner and Povetkin looked every bit of his 40 years.

Povetkin had been knocked down twice in the fourth, his balance looked gone, his top-class career looked over. But 30 seconds into the fifth round, everything changed.

The Russian landed a jab, Whyte missed with a straight right, Povetkin dipped to the left and landed a home run of a left uppercut. It lifted Whyte’s off the canvas and sent him crashing down on his back. Mark Lyson, the referee, didn’t even bother to count.

“Yes, probably,” Povetkin said when asked if it was one of the best punches of his career.

“I didn’t think I would end the fight like this, but I was pretty confident in the fourth round. I did go down twice, but it was OK, it wasn’t too much damage. I got woke up.

“I was watching his fights and taking account that he was missing uppercuts from the left and right, so in training I was doing those shots.”

Whyte does have a rematch clause in the fight contract, but despite Hearn claiming that rematch will happen this year, that seems unlikely with such a backlog of big fights brought on by the coronavirus pandemic.

“One punch changes everything,” Hearn said.

“He will be back. He will rematch Alexander Povetkin and I believe he will win that rematch and bring his No 1 position back to life.” 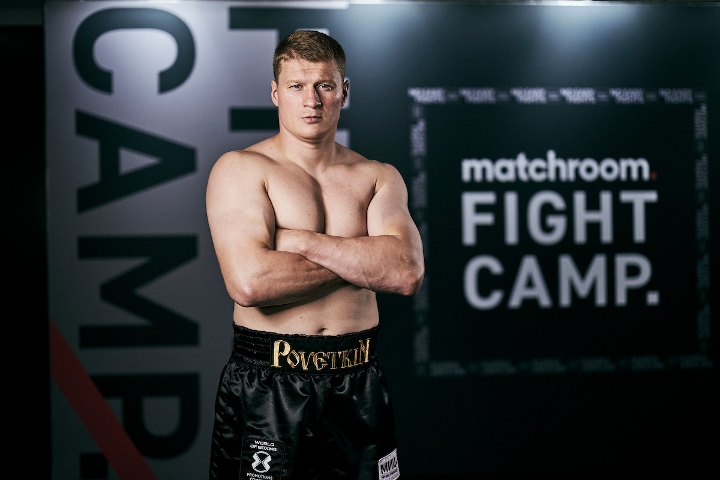 Povetkin picked up Whyte’s WBC interim heavyweight title. Technically that could see him installed as WBC champion, should Fury give up the belt to pursue a fight with Joshua. In reality, the WBC will give the contracted rematch as reason not to enforce the mandatory fight ahead of a unification.

“My future doesn’t depend on me, it is down to my promoter and Eddie and we will see what they decide,” Povetkin said.

Whyte had made a good start, pushing Povetkin back with the jab and narrowly missing with a clubbing overhand right as the Russian ducked low. Povetkin attempted to work his way in with three-punch combinations, but they were falling short.

Early in the second round,Whyte landed two good lefts to the body. Povetkin had some success as he landed a left hook to the head up close, but Whyte’s jab was controlling the range. Povetkin tried to up the pace in the third round, but Whyte finished the round strongly, landing thudding hooks to body and head.

Early in the fourth, Whyte landed clean with two rights before a left hook knocked him down. Povetkin did not look badly hurt, but he couldn’t get a foothold in the fight.

He managed to back Whyte into the ropes, only to walk into a huge left uppercut that put Povetkin over again.

Back in this corner, Povetkin was shaking his head in frustration, but the fight would be over in stunning fashion just 30 seconds into the fifth round.

For Whyte, after 1,000 days on top of the WBC ratings, he will now wonder if his chance will ever come.