Alberto Machado Gets Off The Floor, Knocks Jezreel Corrales Out

Turning Stone Casino, New York - For the vacant WBA super featherweight title, Alberto Machado (19-0, 16 KOs) came off the floor to score a knockout victory over Jezreel Corrales (22-2, 8 KOs) in the eight round. Machado is trained by Hall of Fame coach Freddie Roach.

The belt became vacant when Corrales failed to make weight on Friday. He was initially four pounds over the limit. He weighed in for a second time two hours later and still weighed a shade over 133-pounds.

Corrales started very well, landing accurate shots that shook Machado up in the first round. In the second round, Corrales continued to land quick, accurate punches during exchanges and was really doing a number on Machado when they traded wild shots. 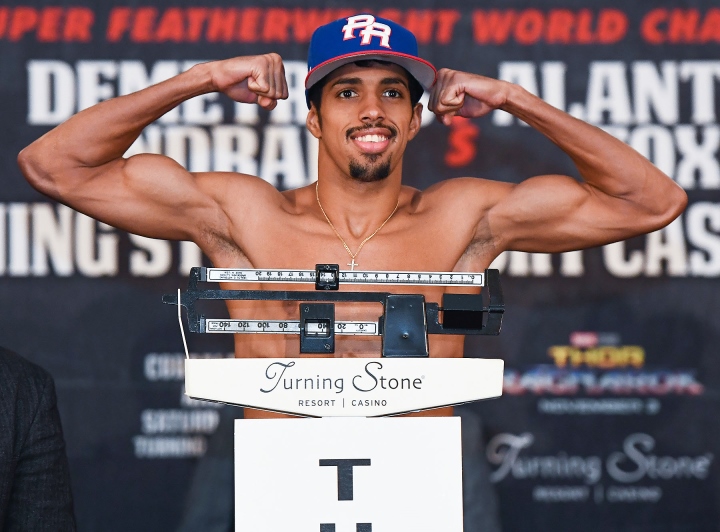 In the third round, Machado finally started to land some heavy blows after making the proper adjustments. Some of the punches got the attention of Corrales. They continued to trade punches in the fourth, with each boxer having their moments. Machado was having trouble landing those big punches, with Corrales using movement. Corrales shook up Machado in the closing moments of the fourth.

During the fifth round, Corrales landed a series of punches that began with big overhand shot - that sent Machado down. He beat the count, but Corrales continued to unload with his punches.

In the sixth, Machado landed a huge hook that hurt Corrales badly and appeared to have him out on his feet. As Machado went to finish him off, Corrales held on for dear life and the two of them tumbled down to the mat. When the fight restarted, Machado went back after him as Corrales was still very unsteady on his feet but made it to the end of the round.

Corrales came back strong in the seventh, by hurting Machado with a big overhand shot. He was unable to finish him off, as the Puerto Rican boxer was being defensive and also holding on to get out of trouble. It should be noted that during the same round there was a two punch combination that landed on Corrales and caused him to dip down and his glove touched the mat, which could have been called a knockdown, but the referee missed it.

During the eight, Machado landed a huge left hand, right on the button, that sent Corrales down face first. He barely got up before the count of ten, still in serious trouble, and the referee waved off the fight.

Machado is the "real" WBA champion at 130. You have to win titles by beating the champion in the ring and Tank Davis didn't do that against Cuellar. I'm not blaming Tank for this. But the WBA is wrong and…

[QUOTE=bigdunny1;18156557]not sure Machado chin is all that better the difference is Corrales doesn't have anywhere near the power Machado does. That was the difference. Corrales only has 8KO's in 24 pro fights. Machado's got power but way to easy to…

[QUOTE=bigdunny1;18156557]not sure Machado chin is all that better the difference is Corrales doesn't have anywhere near the power Machado does. That was the difference. Corrales only has 8KO's in 24 pro fights. Machado's got power but way to easy to…

[QUOTE=club fighter;18154792]Kid had a better chin than Corrales as they landed at the same time. He was losing big at that time, almost every round.[/QUOTE] not sure Machado chin is all that better the difference is Corrales doesn't have anywhere…

[QUOTE=kiaba360;18155484]He looks like Juanma later in his career, a bit too reliant on his power at the expense of his defense. We all know what happened with him once his punch resistance went to *****.[/QUOTE]I actually think Machado's career is…