Alberto Machado Demolishes Yuandale Evans in One Round

Puerto Rico’s Machado dropped Yuandale Evans three times in the first round and needed just two minutes and 25 seconds to knock him out. Referee Ricky Gonzalez stopped their fight after the strong southpaw’s crushing right hook leveled Evans on the Daniel Jacobs-Sergiy Derevyanchenko undercard in The Theater at Madison Square Garden.

The 28-year-old Machado (21-0, 17 KOs) made the second defense of the WBA world super featherweight title he won by knocking out Jezreel Corrales in the eighth round a year ago in Verona, New York. 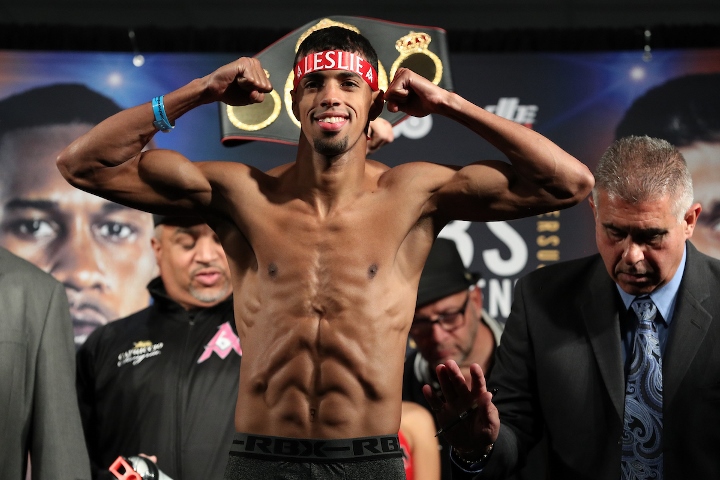 Cleveland’s Evans previously had lost only to former WBA 130-pound champion Javier Fortuna, who also knocked him out in the first round of their April 2012 bout in Austin, Texas.

Machado knocked down the significantly smaller Evans (20-2, 14 KOs) with an overhand left just before the midway point of the first round. A stunned Evans got up and landed a hard left of his own that briefly backed up Machado.

It wasn’t long, though, before Machado hurt Evans again with a left-right combination that sent him into the ropes. A series of power shots, mostly left hands, then sent Evans to the canvas again with just over 30 seconds remaining in the opening round.

Evans reached his feet again, only to have Machado drill him with a right hook that left Evans flat on his back and unable to continue. Gonzalez stopped the scheduled 12-round fight immediately.

[QUOTE=wildman;19229205]Meaningless fight. Evans isn't a world class fighter and had no business being here.[/QUOTE] Evans may not be world class but he isnt too far off. His offensive game is no joke. Did you see his fight with Javier Fortuna?…

I just saw a boxer against a taxi driver....

Machado can punch!!! And box He's got a good long stiff jab!! That will give anybody problems!!!