Albert Bell remains perfect at a time when there are opportunities abound in the junior lightweight division.

Judges Tim Cheatham, Max DeLuca and Richard Ocasio all scored the contest 100-90 in favor of Bell.

The opening frame set the tone for what was going to be a very long night for Bernaldez, who at 5’6” and with a 67” reach is the prototypical junior lightweight. He was dwarfed in size and talent level by Bell, who stands at 6’0” tall and boasting a 73” reach, as evidenced the moment he stuck his jab in Bernaldez’s face in the opening round. 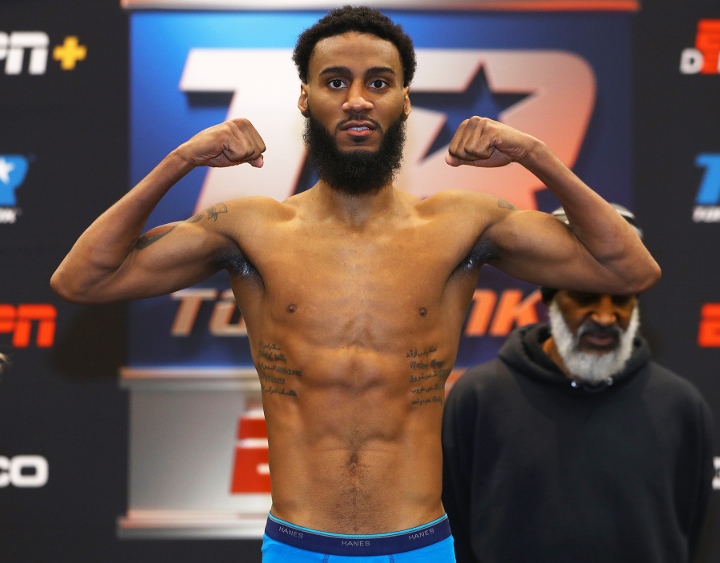 Bell didn’t waste energy, sticking his jab and connecting with the occasional right hand while patiently circling the ring. Bernaldez—a compact boxer from General Santos City, Philippines—never stopped coming forward—almost by force rather than choice as Bell was content with keeping the fight at his desired distance.

Bernaldez began to close the gap in round four, not changing the tide nor disrupting Bell’s rhythm but able to land on the inside with some consistency for the first time on the night. The glory was short-lived, as Bell pumped his jab in round five, with the tone of the fight never changing pace from that point to the end of the night.

Bell put on a boxing clinic in the second half of the fight, to which Bernaldez struggled to come up with a response The rounds continued to pile up as Bell effectively slipped punches in between long left jabs.

Bernaldez turned up his intensity in round nine, not enjoying much success but at least outworking his unbeaten opponent. Bell was content with the pace of the fight, watching every punch and sliding back just enough to avoid the incoming during every exchange. Bernaldez’s burst of energy early in the round was dulled in the final minute, although Bell was reduced to a one-handed boxer after jamming his right hand with less than 0:30 to go in the frame.

Fortunately, Bell was far ahead on the scorecards to that point. Additionally, Bernaldez all but shut down heading into the 10th and final round, allowing Bell to control the pace even when limited to one hand. The same level of dominance throughout the fight was exhibited in the final three minutes, as Bell was able to get away with sticking his jab and immediately dodging the incoming to close out the fight.

The level of dominance was reflected in the final Compubox numbers. Bell landed 125 of 418 punches (30%), nearly tripling up Bernaldez who landed just 46 shots out of 319 punches thrown (14%) as he falls to 20-4 (14KOs) in suffering his second loss in three fights.

One of the losses came to Andy Vences, whom Bell outpointed last June in what was likely his best career win to date. The goal remains a shot at a 130-pound title, hoping for a final eliminator in his next contest. For now, rest and physical rehabilitation is in his immediate future after advancing to 17-0 (5KOs).

[QUOTE=Dasmius Shinobi;20640602]Albert Bell is good, not pleasing for the majority of fans, but he going to become a serious contender soon. :boxing:[/QUOTE] I would've liked to see him finish strong if his hand would've held up. He started turning it…

Albert Bell is good, not pleasing for the majority of fans, but he going to become a serious contender soon. :boxing:

Bell clearly was the better fighter, but i think he shoulda got at least a stern warning for holding. He had a significant reach advantage, and any time his opponent got close he just wrapped him up with no consequences.…

Don't care to see Bell on TV or in person..meh dull