Pacquiao, who turns 40 on December 17, wants to make as much money as possible before the aging process forces him to hang up his gloves. That’s why the ultimate fight for him is a rematch with Floyd Mayweather, which would provide one last windfall in his remarkable career.

However, as we know, there are no guarantees that a second fight with his rival will ever happen. In the meantime, to take home an eight-figure payday, he needed a big-name “B” side opponent who would be perceived as a legitimate threat and who also could help sell a pay-per-view event.

Enter Broner, a polarizing figure who seems to fascinate some people, annoy others and can fight more than a little.

Broner generated some controversy – surprise, surprise – at a kickoff news conference last week in Los Angeles by telling racist “jokes” aimed at Asians and African-Americans, his own ethnic group. The majority of those there were disgusted but, as planned, he drew attention to himself and the fight.

“All [Pacquiao] does is smile and say one word at a time. I gotta sell the fight,” Broner said before his weak attempts at comedy.

Sometimes one forgets amid the muck surrounding Broner that he’s a good fighter, certainly better than Pacquiao’s last opponent.

The Filipino icon’s spectacular seventh-round knockout of Lucas Matthysse in July was reminiscent of his peak years, as he scored his first knockout since he stopped Miguel Cotto in 2009 and generated considerable excitement in the process. 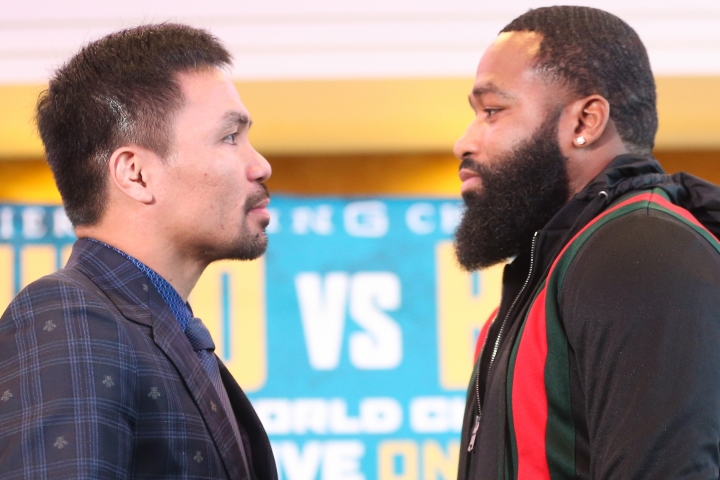 Let’s keep out heads, though. Pacquiao overwhelmed Matthysse in part because the once-fearsome Argentine was in steep decline. The victor deserves credit but he didn’t magically revert at 39 to the fighter who stopped Oscar De La Hoya, Ricky Hatton and Miguel Cotto in succession a decade ago.

That fighter is gone forever, whether his fans want to accept it or not.

I believe Matthysse’s eroded ability was one reason Pacquiao chose to fight him without longtime trainer Freddie Roach in his corner. He didn’t need Roach for that. For Broner, Pacquiao took the steps necessary to bring his mentor back into the fold.

The message was simple: Broner is a legitimate threat to this version of Pacquiao even though he has his own vulnerabilities.

“The Problem” has had a problem with top-tier opponents the past several years, losing to Marcos Maidana, Shawn Porter and Mikey Garcia and drawing with Jessie Vargas – all in his last 10 fights.

Three of the four disappoints (Maidana, Porter and Vargas) came in welterweight fights while he faced Garcia at 140 pounds, an indication that he has difficulty handling bigger opponents.

One deficiency Broner has demonstrated is a curious lack of punch output, as if he’s afraid he’ll get hurt or fade down the stretch. That propensity could cost him against Pacquiao, who is no longer the punching machine he once was but works hard enough to win rounds.

At the same time, Broner has a lot going for him. Matthysse was 35 going on 45 when he faced Pacquiao. Broner is 29 and fights like it. He’s experienced yet retains his skills, quickness and durability. He has been down only twice in his career (both times against Maidana) and has never been stopped.

In other words, even though Broner has had his difficulties, he doesn’t go away quietly. That’s a strength.

Broner also recognizes that this is his opportunity to reclaim some of his lost glory, a chance to climb back among the best fighters in the sport and make big money on a consistent basis. I’m guessing that he’ll be as motivated for this fight as any in his career, which could work in his favor.

And, finally, although Broner hasn’t been a dominating fighter for years, we should remember one thing: He was a four-division world titleholder by the time he was 26 years old. The ability is there.

I predict that Pacquiao will win a decision but, unlike the Matthysse matchup, this is a real fight.

Broner’s quickness and reflexes might be too much for a 40-year-old Pacquiao, who remains a good fighter but isn’t the dynamo of old. We’ve seen it many times: Good young fighter takes down once-great older fighter.

If Pacquiao loses to Broner, particularly if the result if convincing, would spoil any hope of the superfight Pacquiao wants. As he said, “I have to pass through him before fighting Floyd Mayweather.”

I won’t be shocked if Broner ruins Pacquiao’s plans.

[QUOTE=boxinggod101;19325728]I knew I was going back and forth with a dumb troll, than i went through your history and it confirmed it. Take care man. PS: Fury exposed Wilder, made him look like an amateur PS: Let me know when…

[QUOTE=Mzembe;19325632]-------------- Every boxer has had those fights you allude to but Manny fought those BUMS when there were much more better fighters to fight. We can compare other ATG if you want, I am asking about the specific names I…

[QUOTE=Deontay Wilder;19293586]Pacman needs a knockout or dominating victory for interest in Mayweather II. It requires vigilance, calculation, and precision against the 29 yr. old Broner.[/QUOTE] It's crazy but Everytime Manny fights I hear he always needs a KO. Meanwhile May…