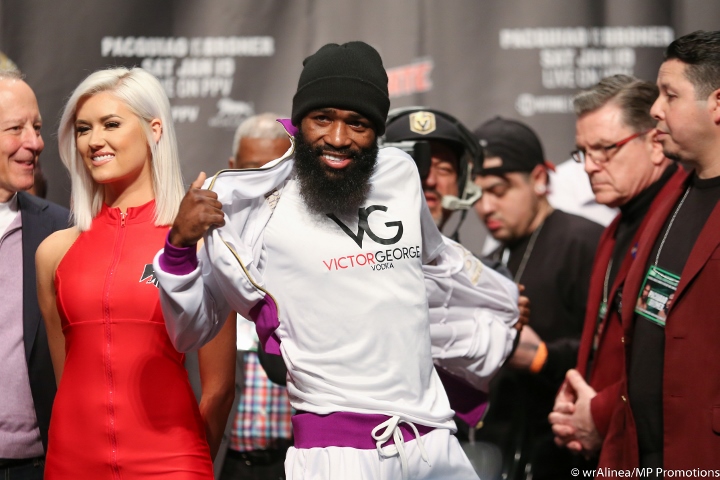 The Pacquiao-Thurman match was more competitive than the Pacquiao-Broner bout, but Pacquiao knocked down Thurman late in the first round and hurt him badly with a body shot in the middle of the 10th round. The smaller, significantly older Pacquiao also badly bloodied Thurman’s nose in the fifth round.

The Philippines’ Pacquiao appeared to buzz Broner in the seventh and ninth rounds of their 12-rounder. Broner absorbed far less punishment in their fight, though, than Thurman took July 20 at MGM Grand Garden Arena.

“Because he couldn’t hit me,” Broner said. “He hit me three times clear, clean. Other than that, the crowd was just roaring. That’s why he – see, after my fight, people don’t know after my fight [with Pacquiao], I tore his retina. I tore his retina. He ain’t do sh*t to me. I left out the fight looking like this [takes off glasses], ready to go to the club.”

When asked if he would give Thurman (29-1, 22 KOs, 1 NC) credit at least for surviving that first-round knockout and testing Pacquiao thereafter, Broner said, “Man, I told y’all I don’t do credit. I got cash, bro. OK? I don’t do credit.”

When informed that Thurman might’ve sustained a rib injury in training that he didn’t disclose before opposing Pacquiao, Broner didn’t buy it.

[QUOTE=Boxing Goat;19955419]Just read my last sentence there over and over until you get it.[/QUOTE] I already read it once, ain't no need to read it again..... I'm unto d next one

[QUOTE=Boxing Goat;19949923]There's record of it out there. Go find it[/QUOTE] Oh so there are other numbers out there BESIDES official compubox numbers...ok ok sounds like a conspiracy theorist to me

[QUOTE=Walexhris;19955265]I am not saying Thurman was actually injured before the fight....I used the Thurman issh to make a point on how ridiculous a thing like dat sounds[/QUOTE] Just read my last sentence there over and over until you get it.

[QUOTE=Walexhris;19955232]Sweetheart that's unnecessary[/QUOTE] I'm no sweetheart and I didn't know you were a chick. My bad