Abner Mares Splits With Garcia, Training For Comeback With Robles

When former three-division world titlist Abner Mares returns to the ring later this year he will have a new head trainer in Manny Robles.

Mares has parted ways with Robert Garcia and is now being trained by Robles, Mares told BoxingScene.com on Wednesday night.

Garcia served as Mares’ head trainer for three fights, leading him to victories over Jesus Cuellar to win a secondary featherweight title in 2016 and a successful title defense against Andres Gutierrez in 2017 before Mares dropped a unanimous decision in a world title rematch against Leo Santa Cruz in an exciting battle that was also for Los Angeles bragging rights. 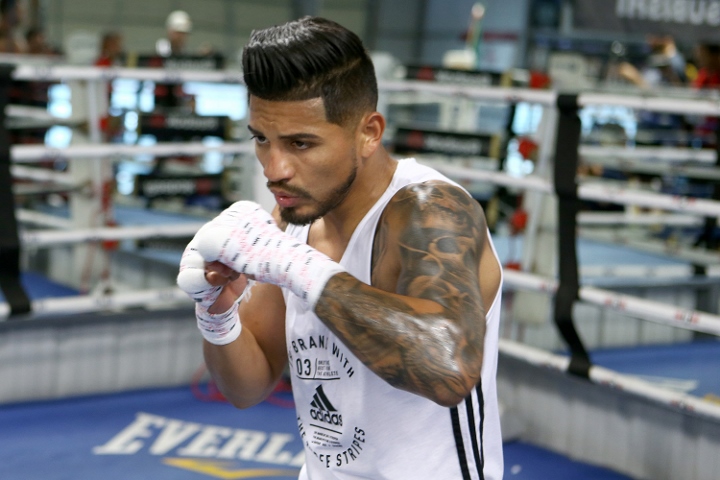 Mares has not boxed since that June 2018 rematch with Santa Cruz mainly because of a detached retina in his right eye that required surgery.

But Mares, who injured the eye about two weeks before he was scheduled to challenge then-junior lightweight titlist Gervonta Davis in February 2019, said the eye is healed. Mares said he has been cleared to train without any restraint and has been working with Robles for about 2½ months.

The 34-year-old Mares (31-3-1, 15 KOs) said there are no hard feelings between he and Garcia and that he made the decision to train with Robles because the location of his gym made for a much easier commute rather than the roughly three-hour round trip he was making from where he lives in Huntington Beach, California, to Garcia’s gym in Riverside, California.

“I spoke to him like a true professional,” Mares said. “I went to Robert’s camp in Riverside, talked to him as a friend and told him I wasn’t going to be able to make the drive anymore, and when I say drive we’re talking like an hour-and-a-half from where I live in Huntington Beach to Riverside. I told him it was time consuming going to his gym the past three fights. So we left on good terms.

“I talked to Manny Robles, who I’ve known for many years. Who doesn’t know Manny Robles? And he’s only 15 or 20 minutes away from where I live. I built a great relationship with Robert. I call him ‘big bro,’ and I’m welcome in that gym. No bad feelings.”

Mares said he did not begin working with Robles until after he talked to Garcia about the situation just after the beginning of the year.

“I’m not the type of guy who would start training with a guy and then have Robert hear it from somebody else, so I talked to him before,” Mares said.
Because of the coronavirus pandemic, Mares said he has trained privately with Robles and so far it has gone very well as he looks forward to fighting again in the late summer or fall.

“I love it. I don’t believe there’s a bad trainer,” Mares said. “They always have something to teach you know matter how many years you’ve been in it. There’s always something new to learn. Training with Manny has been easy. It’s been an easy transition. He’s such a likable guy. He trains really well. He’s got a great team.”

Mares said that despite his having a decorated 15-year career that has included winning world titles at bantamweight, junior featherweight and featherweight, Robles found things to work on with him right away.

“From the beginning, just the shadow boxing, he corrected me, certain punches that I was throwing and you’re like, ‘I’m a three-time world champion, what are you talking about,’” Mares said with a laugh. “But there is always room for improvement and I’m open to it.”

He takes too many clean punches

I understand him and he handle the decent way. Respect to Abner Mares. Also, I hope he have one last hurrah and retire for his health, especially his eye. :boxing:

Mares is old news; he will be knocked out by any decent journeyman at this point.

Dan . This is a month old news, we all knew about this , snap out. Stop ordering extra cheese on those burgers and info yourself.

Good for both. I would hope. Like to see Mares in the ring again. With Robles, you know he enters the ring ready. Nothing against the Garcia camp. Much respect there. Props to SC Boxing!