Who did they beat?

When assessing the careers of boxing’s best, it’s often the first question fans, pundits, history buffs, and even other fighters turn to when trying to split the difference between the best of the sport. At the dawn of a new decade, there has been much discussion about the battler with the best run over the previous ten years.

Logically, after “who” the next question is often “when,” as in when did they beat them. Who can forget the memorable barber shop scene in the classic Coming to America where the age of Joe Louis is, to say the least, inflated in discussing his loss to Rocky Marciano.

The vote from this corner for best of the 2010’s is already cast for Floyd Mayweather. In what was functionally a prologue to this series, For Fighter of the Decade, the BWAA Got it Right, the rationale for that vote was explored looking at Mayweather’s activity, quality of opposition, and overwhelming economic impact.

It was a piece of a bigger evaluation of the decade.

Using the ratings of the published issues of Ring Magazine, and the archived ratings of the Transnational Boxing Rankings Board (TBRB) since their debut in October 2012, and under the assumption they act as a reasonable gauge of the state of each of boxing’s seventeen weight divisions over the last decade, a select group of fighters was evaluated with two questions in mind:

What fighters rated by Ring, TBRB, or both, did the men considered face?

What were those opponents rated divisionally when they fought?

Things like being a future or former titlist don’t matter here, nor do title defenses. Those are important things to consider for many but this isn’t meant to be the last word on what makes a great run. It’s just one lens to look from based on the simple question of what would happen if we looked at just the two questions outlined.

With four belts per division, lineal crowns, Ring Magazine belts and more around to win, this is not a cumulative look at every fighter for the decade. Instead, a baseline was established by looking at the pound for pound ratings published by Ring Magazine in print form and then a review of the archived pound for pound ratings of the TBRB for any fighters who appeared on those lists but not Ring’s.

It left a pool of more than fifty fighters to consider; heavyweights Anthony Joshua, Tyson Fury, and Deontay Wilder were also scored. Heavyweights often fall short of pound for pound consideration but represent the peak of the sport in literal terms. None of the three made the top twenty regardless.

For the Ring lists, because they represented the full ten years, a point system was used for each month printed. In the final part of this series, the results of that top twenty and how it was generated will be shared.

For this series, a different point system was tallied using the most recent ratings available in an issue of Ring or the most recent archived TBRB ratings prior to a fight. The rules worked like this:

1. Wins over rated opponents started at 11 points for a recognized champion (TBRB/Ring) down to one point for defeating a number ten contender. Draws got half credit. No points were given for a No Contest or No Decision but the result will be noted.

2. Losses to rated opponents were given an inverse score, beginning with -1 for a champion down to -11.

3. Losses to unrated opponents received a universal score of -12 (with some logical exceptions that will be explained when applied).

4. If there is a difference between a fighter’s Ring and TBRB rankings, the average of the two numbers was used (i.e. a win over a fighter rated second by one body and fifth by the other would be worth 3.5 pts).

5. If a fighter was rated by only Ring or TBRB, half credit was given for a win. A loss total would come from an average of -12 and the point loss that would apply to the rating that was in place.

6. Moves between weight classes were adjusted for by taking into consideration the body weight shift between weight classes. In other words, if a rated Jr. welterweight jumped up to beat a rated welterweight, the math would work like this: 147/140 multiplied by the divisional rating. It works in reverse for a win over a fighter from a fighter rated lower (i.e. 160/168 multiplied by the smaller man’s rating in his class). In an over the weight class fight, the divisions the men were rated in were used.

7. All divisions were treated equally based on the idea fighters can only face the men in their division while they are there and all point totals were applied based on official results.

Enough about math. No one came here to read about the method. Without further ado, we begin with a Cuban maestro.

Record Against Rated Opponents: 4-1, 1 No Contest

The still-reigning lineal Jr. featherweight champion edged out Timothy Bradley by less than a point for this spot. Rigondeaux, a legendary amatuer, was besting genuine top-ten contenders before his pro career was ten fights old. His highlight was the masterful boxing exhibition against Donaire in 2013.

Missing in the Numbers: Acute readers will note the drop off in opposition for Rigondeaux following his 2013 wins over Donaire and bantamweight Joseph Agbeko. Over the following four years before he faced off with Flores, despite a flurry of activity around him the Jr. featherweight division, Rigondeaux was left out of the mix. Had the best in his weight class continued to test him throughout the decade, there is every reason to think Rigondeaux could have finished far higher. He has yet to lose near the weight he’s made home the bulk of his career.

Froch made a reputation for his willingness to face genuine top contenders at 168 almost non-stop from the time he won his first title in the previous decade. Of his two losses, only one could be called decisive and the other was avenged. Froch’s approach culminated in a stadium showdown rematch with Grove in front of some 80,000 fans. Froch might have mentioned it once or twice since.

Missing in the Numbers: The official result of the Groves rematch could temper the memories of their first showdown. Froch was down early and far behind before getting Groves in trouble late. Referee Howard John Foster waved the fight off in highly debated fashion. Would Froch have stopped Groves anyways? Or would Groves have held on to win? Either way, the rematch packs them in the stands but it could have affected the outcome here. 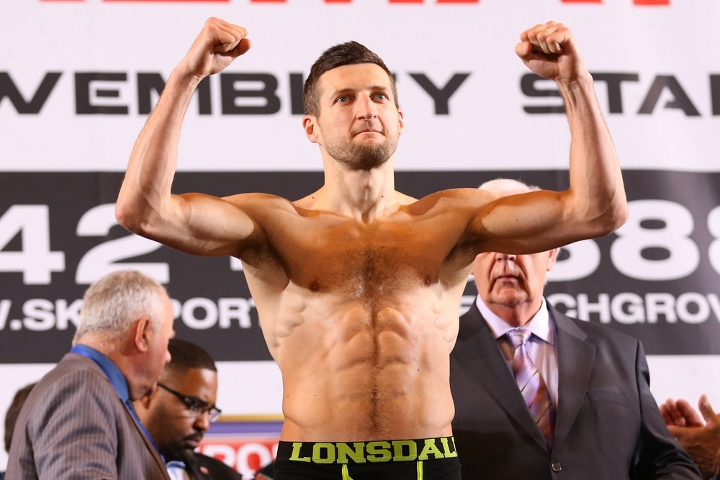 The four-division beltholder held three of those titles in the decade and was quietly consistent throughout. A capable boxer-puncher with a high boxing IQ, Nietes often flew under the radar compared to his lower weight contemporaries. His finest performances likely came in the Fuentes rematch and the Ioka upset that may ultimately stand as his farewell performance.

Missing in the Numbers: Nietes often seemed to rise in weight a hair too late. Was his management more careful with him than necessary or did the economics of chasing bigger names sooner just not work? Would going to flyweight while Roman Gonzalez or Estrada were still there have seen him elevated even higher or bumped lower? We’ll never know.

The consensus pound for pound leader for much of the time after the retirement of Floyd Mayweather in 2015 until his first loss to Sor Rungvisai, Gonzalez was arguably the most important fighter at flyweight and below since Vic Darchinyan if not Michael Carbajal. After years as a titlist in three weight classes, he became a fixture on HBO paired with Gennady Golovkin and delivered two of the best fights of the decade versus Cuadras, in his first fight with Sor Rungvisai. A third classic of the same vein came with a man whose name doesn’t feature above.

Missing in the Numbers: The third of those memorable wars was with Juan Francisco Estrada, unrated by Ring or TBRB when he and Gonzalez squared off in 2012. Hindsight being 20/20, Estrada probably should have been rated by both at 115 lbs. entering the Gonzalez fight. Juan Carlos Sanchez was in both top tens after defeating Juan Alberto Rosas...and Estrada had stopped him two fights prior in a revenge rematch. Gonzalez also beat Francisco Rodriguez before Rodriguez was rated and went on to unify a pair of titles at 105 lbs. Gonzalez suffers here from a little bad luck as well: had the hotly debated decision in the first Sor Rungvisai gone his way, those are points in his favor.

One of the biggest global stars of the decade, and the most accomplished heavyweight of the post-Lennox Lewis era, Klitschko regularly faced the men who earned a crack at him as heavyweight champion. A cerebral, defensive minded giant with an all-time great jab and right hand, Klitschko was all but unbeatable for the first half of the decade. He was rewarded with stadium crowds in Germany and the United Kingdom even if he never caught the same fire in the United States. Fury was the man to finally solve him after years of predictions about a chin that was never as brittle as some early stumbles led some to believe. Klitschko came back to end his career, so far, in losing one of the great heavyweight battles against the rising Joshua.

Missing in the Numbers: It’s hard to find much Klitschko missed outside a fight with his brother Vitali. Vitali held the WBC belt for much of Wladimir’s reign in the decade, the lone major alphabet belt he never won. Bermane Stiverne, who won the title left vacant by Vitali, would have been unlikely to defeat Wladimir and Stiverne wasn’t remotely steered toward a unification clash. Deontay Wilder held the WBC belt for less than a year before Fury-Klitschko so that clash never had a chance to emerge either.