HOLLYWOOD, Fla.—Zhang Zhilei announced his arrival in the heavyweight picture with a big bang.

The two-time Olympian and 2008 Olympic Silver medalist made a splash in his first official fight under the Matchroom Boxing banner, scoring a 4th round knockout of Sylvania, Ohio’s Devin Vargas.

A straight left hand put Vargas down and out 0:49 into round four of their heavyweight battle of Olympians Saturday evening at Seminole Hard Rock Hotel & Casino in Hollywood, Florida.

Zhilei patiently picked apart Vargas from the outset, working behind the jab before unloading the entire arsenal. The 6’6” southpaw from Zhoukou, China—who trains in Broomfield, New Jersey—stalked Vargas, whose greatest rate of activity in the opening round were the sequences where he complained of getting hit behind the head. Zhilei targeted the Ohio native’s midsection, connecting with left hands downstairs before bringing the weapon up top as Vargas was trapped in a corner. 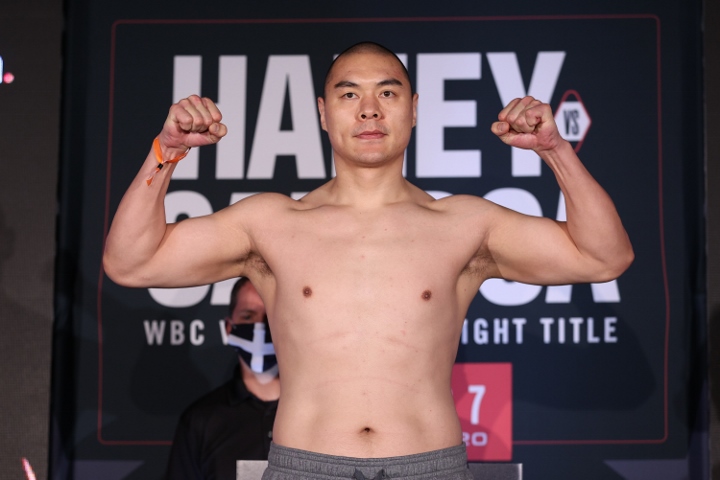 The offensive attack from Zhilei picked up in round two, repeatedly forcing Vargas—whom represented the United States in the 2004 Athens Olympics—into the ropes through his long right jab and straight left hands. The one-sided action made its way to center ring in round three, with Zhilei pickig his spots and Vargas fighting behind a high guard with very little offense offered in return.

Zhilei emphatically closed the show in round four. Vargas left himself exposed just long enough to absorb a jab and left hand, the latter sending him to the canvas in a heap. Referee Frank Gentile reached the count of ten, with Vargas’ corner encouraging him to remain down to allow medical assistance.

Vargas falls to 22-7 (9KOs), having now lost three of his last five starts.

Zhilei advances to 22-0 (17KOs) with the win, his first of 2020. As good as it was, the sense from the heavyweight and his team is that it could have been even better.

“I felt like I was at about 60% of where I was at in training camp,” Zhilei told BoxingScene.com. “The pandemic has affected everybody, so I have to do better in the ring with the opportunities I am able to get.”

The hope is to return to the ring potentially by February or even as early as January, which will allow the rising heavyweight to remain in a groove.

“This was his first fight back in a year, just two fights in two years,” Shaun George, Zhilei’s trainer and former contender told BoxingScene.com. “He’s with Matchroom now, ideally we’re looking to return in February and keep fighting at that pace. I feel like he’s a contender right now, but he just needs to keep active.”

Zhilei had a 10-fight knockout streak snapped in going the 10-round distance last November. The early ending on Saturday is not so much the start of a new knockout run, but a restart on which to build.

“I know I can do better my next fight,” Zhilei insisted. “I am ready for any heavyweight Eddie Hearn and my team is ready to put in the ring with me.”

Devin Haney prepares to make a splash in a vibrant lightweight division, as his appearance comes as part of an active stretch for all of the top players at 135 pounds.

It was an absolutely beautiful knockout. Perfectly timed counter.