Barely 20 seconds after Baranchyk knocked him down for the fourth time, Zepeda blasted Baranchyk with a left hand that emphatically ended their scheduled 10-round junior welterweight fight at MGM Grand Conference Center in Las Vegas. Zepeda’s shot sent Baranchyk on his back awkwardly, with his right leg bent beneath him, and instantly ended their incredible, back-and-forth fight with just 10 seconds to go in the fifth round.

Russia’s Baranchyk (20-2, 13 KOs) remained on the canvas for several minutes, was helped from the ring and was taken to a local hospital for observation. ESPN’s Mark Kriegel reported toward the end of the ESPN+ stream that Baranchyk was alert, sitting up and in good spirits in the ambulance.

Moments earlier, Zepeda inconceivably overcame four knockdowns to beat Baranchyk in what immediately became the obvious front-runner for “Fight of the Year” in 2020. Referee Kenny Bayless stopped their epic encounter at 2:50 of the fifth round, after Zepeda dropped Baranchyk for the fourth time.

There were eight knockdowns altogether, four apiece for Zepeda and Baranchyk, in a fight that didn’t even last five full rounds. Zepeda seemingly should’ve been credited for what would’ve been his fifth knockdown very early in the second round.

“I feel great because I won the fight,” Zepeda told Kriegel during his post-fight interview. “It was a hard fight. I’m thinking, ‘Man, boxing, it’s hard, man. It’s no easy game. Boxing, it’s tough and you’ve gotta give it a hundred percent because it’s a hard sport. It’s probably the hardest sport.”

The 31-year-old Zepeda, of La Puente, California, improved to 33-2 and recorded his 26th knockout. He had been knocked down just once in 34 professional bouts before Saturday night. 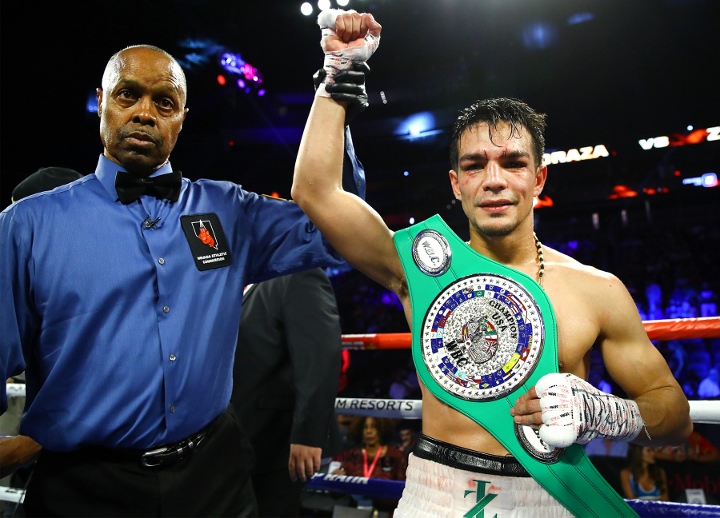 The 27-year-old Baranchyk, a former IBF junior welterweight champion who had only previously lost a unanimous decision to IBF/WBA champ Josh Taylor (17-0, 13 KOs), lost by knockout for the first time in his six-year pro career.

Zepeda added that he told Baranchyk, “Thank you. Thank you for the opportunity. I mean, both of us are climbing up and somebody had to stay. … I was able to win the fight and I told him, you know, ‘Thanks for the fight. Great fight.’ It was a great fight.”

A crushing right hand by Baranchyk knocked Zepeda backward, into the ropes, with 38 seconds to go in the fifth round. The ropes held up Zepeda, who was backed into a corner, thus it counted as Baranchyk’s fourth knockdown in five rounds.

Zepeda responded yet again by belting Baranchyk with a left hand that knocked Baranchyk awkwardly onto his back with 15 seconds to go in the fifth round and ended their unforgettable fight. That marked the fourth time Baranchyk was knocked down in their fight.

Zepeda’s left hook knocked Baranchyk to the canvas for the third time with 18 seconds to go in the fourth round. A staggered Baranchyk got up yet again, answered Bayless’ commands and finished the round.

A short, left hand inside by Zepeda sent Baranchyk to the canvas for the second time exactly one minute into the third round. Baranchyk rolled over and got to his feet.

After getting dropped twice during the first round, Zepeda drilled Baranchyk with a short left that knocked him down just nine seconds into the second round. Baranchyk bounced to his feet quickly, but Bayless didn’t count it as a knockdown.

Zepeda sent Baranchyk to the canvas again with a left hand 45 seconds into the second round. Bayless counted that knockdown for Zepeda, whose punch dropped Baranchyk to his gloves and knees.

Zepeda promptly attempted to finish his hurt opponent, but Baranchyk landed a counter right hand that floored Zepeda for the third time, just 24 seconds after Baranchyk hit the canvas officially for the first time.

Baranchyk landed a sweeping left hook just a few seconds into their fight. Baranchyk’s left hook caught Zepeda with 1:43 to go in the opening round.

A right hand by Baranchyk sent Zepeda into a squatting position, with both gloves on the canvas, with 1:15 to go in the first round. That was just the second knockdown of Zepeda’s career.

Four rounds later, Zepeda produced an epic victory in a WBC elimination match that should inch him closer toward a rematch with Jose Ramirez.

The unbeaten Ramirez (26-0, 17 KOs), who owns the WBC and WBO 140-pound championships, edged Zepeda by 12-round majority decision in February 2019 at Save Mart Center in Fresno, California. The controversial conclusion of the Ramirez-Zepeda bout has generated interest in a rematch.

Zepeda and Baranchyk went at it Saturday night nearly three months after they were supposed to fight. Baranchyk pulled out of their bout scheduled for July 7 late in June once he sustained a rib injury in a sparring session.

Baranchyk clearly put Zepeda through something entirely different than Castaneda. The skillful southpaw was supposed to be the boxer in this battle between boxer and puncher, yet he was the one who knocked out his powerful, rugged opponent.

“I know I’m tough,” Zepeda said. “I didn’t know how tough I was. Well, tonight I showed. And I showed myself, too. You know, it’s the first time I’m in a fight like this and it was a great learning experience.”