The legitimacy of the claimed title notwithstanding, Yordenis Ugas sent an industry-wide reminder that he remains a problem for any welterweight in the world.

True to his career form, an otherwise dominant performance from 2008 Olympic Bronze medalist from Cuba came with drama from the judges. Ugas was forced to settle for a horribly scored 12-round split decision win over Casa Grande, Arizona’s Abel Ramos in their Premier Boxing Champions (PBC) on Fox main event Sunday evening, live from Microsoft Theater in Los Angeles.

Dr. Lou Moret’s card of 117-111 in favor of Ramos should disqualify him from ever again officiating a contest. Judges Edward Hernandez Sr. and Zachary Young at least had the right boxer winning, though surprisingly close at 115-113 apiece in favor of Ugas, who picks up a secondary version of the World Boxing Association (WBA) 147-pound crown.

"I set a goal when I was a child back in Cuba to become a world champion and I accomplished that goal tonight," said Ugas after the win, his 13th in 14 starts since returning to the ring in 2016 following a two-year break. "I'm so grateful to everyone who helped me along the way. Ramos was a very tough opponent and I knew it was not going to be easy, but I wasn't going to let this opportunity slip away."

Ugas sought to establish his jab early in the contest, while Ramos offered lateral movement in a largely feel-‘em out opening round. The 34-year old welterweight contender was well in control for most of the frame, though not letting his hands go to which head trainer Ismael Salas requested a greater activity rate moving forward. Ramos landed the best punch of the round, a left hook in the final 0:15 of the frame.

The battle of the jabs continued in round two, with Ugas continuing to get the better of the action. Ramos overshot a left hook, leaving the 29-year old open for a combination to the body by Ugas, who landed another right hand downstairs at the end of the round.

Ugas carried over that method of attack in round, committing to an early body attack as Ramos was forced to search for space between the two. The jab continued to serve as the dominant weapon of choice for both boxers, with Ugas getting the better of the two. Ramos finally broke through the otherwise tight guard of his Cuban foe late in the round, landing clean shots upstairs after being reduced to single digits in connects through the first eight minutes of the bout. 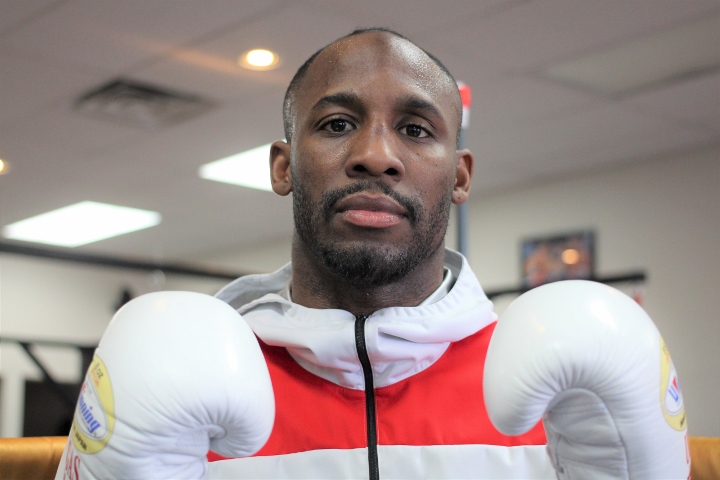 Enjoying momentum for the first time in the fight, Ramos came out energized to begin round four. The Arizona-based welterweight was fighting through reddening and swelling around his left eye, though looking to initiate the action after falling in an early hole on the scorecards. It only played into Ugas’ strategy, doubling up on his jab although Ramos connected with the best punch of the round, a left hook which buckled the knees of Ugas.

Ramos closed the gap considerably in round five. Ugas was still controlling the tempo of the fight, following his jab with whipping right hands to the body. Ramos enjoyed success through counterpunching, riding out Ugas’ attack to respond with power shots.

Action continued to get tighter in round six. Ugas threw in combination upstairs, some shots getting through and others picked off by Ramos. Efforts by Ugas to land a home run shot instead resulted in a fall to the canvas as he horribly overshot with a looping right hand. Ramos came back late in the round, landing a well-placed left hook to the body and coming back with a right hand upstairs.

Ugas returned to basics to open up the second half of the contest. The 2008 Olympic Bronze medalist doubled up on his jab, with Ramos not able to offer any better than one at a time in return. Ramos pawed with his jab, allowing Ugas to mix in a right hand to the body while avoiding nearly all of the incoming return fire.

Action remained in the same direction in round eight. Ugas landed his best punch of the fight to that point, a right hand late in the frame which forced Ramos to do a double step before regaining his balance. The trend continued in round nine, with Ugas landing a stream of jabs before following up with an overhand right which found its mark.

As the bout approached the championship rounds, it seemed reasonable to expect that Ramos’ only shot of winning was recapturing that same magic which produced his previous win. A literal last-second stoppage of Bryant Perrella this past February in Nashville saw Ramos overcome a scorecard deficit in a fight where he was outlanded 200-80 prior to the bailout win.

Ugas was far too disciplined and sturdy-chinned to allow history to repeat itself, looking to change up his own unlucky past as well. Sunday’s bout was his second attempt at a major title, coming up just short in a debatable 12-round split decision to then-WBC welterweight titlist Shawn Porter last March.

On this occasion, he did his part to remove any doubt even if his final round strategy came into question. Well ahead on the scorecards, Ugas—who landed 233-of-768 total punches (30.3%) according to Compubox, including a career-best 160 landed jabs—was content to stay in the pocket and trade. It served well for the balance of the frame, although Ramos saved his best for last—a left hook around Ugas’ tight guard in the closing seconds of the contest.

It was enough to put the finishing touches on a clean sweep of the championship rounds on all three cards, as well as Ramos claiming nine of the final ten rounds in the questionable judgment of Dr. Moret. It wasn’t, however, enough to extend his eight-fight win streak which comes to a close as Ramos—who was just 109-of-626 (17.4%)—falls to 26-4-2 (20KOs). The loss is his first since an April 2018 10-round majority decision defeat to Minneapolis’ Jamal James (27-2, 12KOs), who claimed the WBA “Interim” welterweight title in this very venue just four weeks ago.

James was the first opponent in line for Ugas’ launched comeback four years ago—albeit on short notice in place of Perrella. It kicked off a 10-fight win streak before the loss to Porter, with Ugas (26-4, 12KOs) having now claimed his third consecutive win.

This one comes with a major title, along with a mandatory challenger. Waiting in the wings is Radzhab Butaev, who was cheated out of the title after prior conqueror Alexander Besputin tested positive for a banned substance following his tainted 12-round win last November.

A ruling was handed down by the WBA earlier this summer, allowing Ugas and Ramos to fight for this very title with the assurance that the winner next face Butaev. Barring any COVID-related travel restrictions which would disallow such a fight, it would seem to stand in the way of a reasonably expected rematch and title consolidation clash between Ugas and James.

For now, it keeps Ugas heavily in the mix of the best welterweights in the world—even as he is forced to continue to conquer the ring officials as often as the opponents in front of him. No matter the efforts to deny his just due, the mission remains clear—keep moving forward until the time has come where he has cleaned out boxing's deepest division.

"I came into this fight in the best shape of my life and it showed," said Ugas. "Now that I'm a world champion, I want all the big names in the welterweight division."

[QUOTE=Peterliminator;20748332]How blatantly biased was the Fox team of Kenny, Lewis and Goosen who sang the praises of Ugas before, during and after the fight. Granted, Ramos did not do enough to win the fight and Lou Moret's score of 117-111…

[QUOTE=budfr;20748222]He is boring, albeit not as much as the other Cubans. He has no fan base, only a few fans in Miami, which half the Cubans there hate him because he represented the Cuban regime many years. In his country…

[QUOTE=budfr;20748211]Well if the writer of the article, Mr. Donovan is criticizing Morett, he should write about the fights in a more precise manner. Why calling Ugas " sturdy chinned ?" He was basically KOed in the last seconds of the…

[QUOTE=garfios;20748189]Boring? You most be a hater. I do understand pacquio not fighting him. But not because he is boring.[/QUOTE] [QUOTE=AdonisCreed;20748318]Exactly right. Ugas isn't a big draw at the moment (although Jeff Horn wasn't either but that's a story for another…