Anthony Yarde didn’t accomplish what he set out to do by traveling to Russia to challenge a light heavyweight champion in his hometown.

From that standpoint, the British contender is far from satisfied. Yet even in defeat, the previously unproven Yarde realizes he at least demonstrated during his 11th-round knockout loss to Sergey Kovalev on Saturday night that he belongs at the championship level.

Before Kovalev knocked him out with a stiff jab in Chelyabinsk, Russia, Yarde badly hurt Kovalev late in the eighth round. The hard-hitting challenger appeared on the verge of winning by knockout, but Kovaelv came back at the start of the ninth round, regained control of their scheduled 12-round fight and took advantage of Yarde’s inexperience and fatigue. 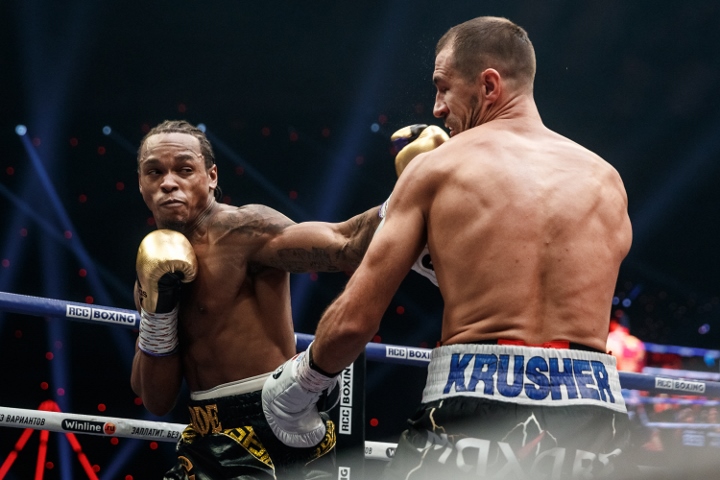 “I’m not gonna keep talking about my experience, but experience played a big part,” Yarde told BT Sport’s Steve Bunce during a post-fight interview. “I felt like he paced himself a lot better. I know I hurt him to the body and, again, I felt I should’ve went for it. My corner said, ‘Go for it!’ I felt the same way, so we literally – I went for it. You can tell he’s very experienced. He’s had a lot of world title fights. But again, I’m one of them people – I’m not ashamed, I’m not embarrassed. I’m very ambitious, but I’m not ashamed, I’m not embarrassed.

“I’m trying to motivate people to go for what you want. Even still, again, I’m very upset I wasn’t victorious today. But again, I’ve done myself justice – I believe, anyway. I have to go back and look at the tape. In my mind, I’m always gonna think I could’ve done better. But even coming out here, 95 or 99 percent of people wouldn’t have even dared to do what I did.”

The 28-year-old Yarde (18-1, 17 KOs) had just 30 bouts combined on his amateur and professional records prior to challenging the 36-year-old Kovalev (34-3-1, 29 KOs) and had never boxed beyond the seventh round. The WBO light heavyweight champion, meanwhile, participated in his 16th straight world title fight Saturday night.

“I’m never gonna say that was good enough, because I didn’t win the fight,” Yarde said. “I’m just that ambitious. So, in my mind, I’m gonna go back to the drawing board. Again, I worked my ass off. But there’s probably some technical things I need to work on.”

Hopefully this is a wake-up call for him, I dont like the persona he has created for himself but I attribute that largely to his camp and the people around him (he doesnt strike me as bright or streetwise) and…

He will do well at that level, he's got to step in with tougher opponents from here on in. He gave Kov a free ride in the 9th by not doing much due to exhaustion.

[QUOTE=whirlout;20013326]Pascal is a champion. Gatekeepers are not champions dummy. And Pascal probably brutally knocks out Yardee late when his stamina fails him but will a good fight till that point. Pascal got a heavy right, a solid chin and good…

I've seen several comment that this guy went out on his shield. Wrong. He went out on his back door, unable to continue. And I'm being polite in that analogy. He had a nasty attitude going into the fight, and…