The next season of the World Boxing Super Series could feature a heavyweight division, which could mean Dereck Chisora getting an invitation, despite him slamming the tournament at a press conference last week.

Heavyweight is one of four division under consideration for series three of the eight-man knockout event, which is likely to begin in February. 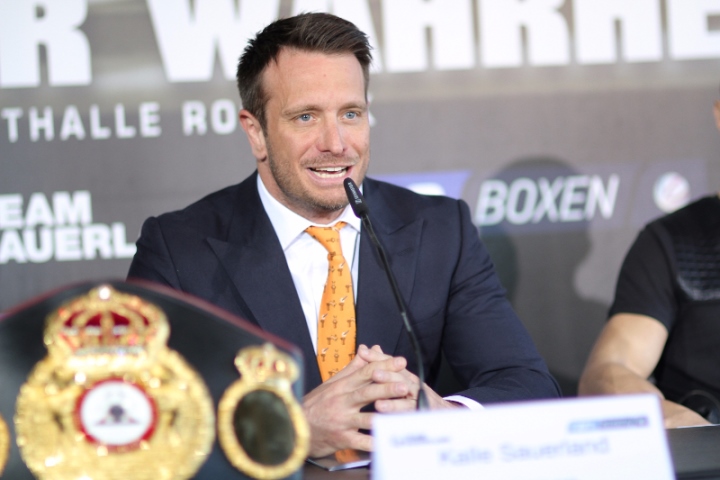 Under consideration for the next series is heavyweight, middleweight, super-flyweight and one women’s division. A change to the scheduling will see the series run in one calendar year, with the first round likely taking place in February and the finals in November or December.

A heavyweight series would be popular, although it would not feature any of Deontay Wilder, Andy Ruiz Jr, Tyson Fury or Anthony Joshua.

But Kalle Sauerland, the WBSS promoter, is certain there will be plenty of interest and suggested Dillian Whyte, Daniel Dubois, Filip Hrgovic, Agit Kabayel and the winner of the Joseph Parker-Chisora fight as possible entrants.

The Parker-Chisora fight is the chief support to the Prograis-Taylor final at the O2 Arena, London, on October 26, and last week Chisora walked out of a press conference to announce the show, after demanding to be elevated to top of the bill and saying “no one gives a f*** about” the Muhammad Ali Trophy, the ultimate prize for the winner of the WBSS.

“You would probably look at Dillian Whyte, Dereck, some of the young guys, Dubois, Hrgovic, Kabayel, there are loads,” Sauerland said. “There are about 12-13 names to get down to eight, maybe even do a couple of qualifiers.

“We would definitely be able to pay them more than what they are earning now. It is about the money.”

Sauerland insists that all things are good with the WBSS, having had problems at the start of season two.

“We had major issues with our broadcasting at the end of last year,” Sauerland said. “The company that was doing it, MP & Silva, went to the wall, the shareholders had to step in. It caused us issues, but we solved them. It was never a question of whether we are doing it or not, but it was a little bit more of a battle outside the ring.

“But there were issues in the first season with injuries. It’s boxing, these things happen.

“We hope to get things sorted by October. We are going to change the timetable and do it over the year, so we will be looking at the first fights around February, building to the final at the end of the year.

“I don't know if it going to be two weights, three or four right now. It depends on budget, obviously, and seeing what we can put together in the best way. But it will be exciting.”

The second series of the WBSS has produced some exciting finals. It was reported in the United States that Prograis was trying to get out of his final with Taylor, but Sauerland insisted that was never going to happen as his contract was watertight.

“The conversations we had with Prograis were ‘you told us we would be fighting on this date’, but in a normal fight, I would just cancel it and he would have to wait three months for another one,” Sauerland said. “That’s the way a standard contract is. Whereas he is fighting three times at this level, for this money, in a year.

“Both were non-champions going into the tournament, so their value is a certain amount. As he goes through the tournament his value rose and of course he got a call saying ‘how’s your contract?’ “They served a writ and they called it a breach of contract. It was the fastest lawsuit in history, six days. It was the same with (Ivan) Baranchyk, they didn’t want to come over.

“Prograis is an amazing athlete. Super puncher, movement, his range is incredible. Josh is much more stand-up, old-school. From styles this fight is fascinating.”

I don`t see top 10 heavyweights in this tournament.

[QUOTE=Koba-Grozny;20069662]I'm doing well, john... had a bit of time off traveling through August and since I got back I been busy as hell catching up with work and a coupla community projects I got involved in... not much time for…

[QUOTE=Corelone;20069124]They brag about water tight contracts while they play games. [B]Baranchyk signed a contract to fight in Russia, but somehow the only available place was the Hydro? [/B]Water tight on one end.[/QUOTE]WOW! I didn't know that!

With the likes of Chisora/Parker, Joyce, Dubois, Ajagba, Fa, Price & Miljas a H/W tournament could actually could be limited to Commonwealth fighters. A European should be quite east for Sauerland as well featuring Wallin, Kayabel, Hrgavic, Knowacki, Romanov &…

If they could pull off a middeweight tourney with Charlo, Andrade, Jacobs, and even lil g if he grows a pair, would be interesting. Sadly, in all likelihood it'll be B/C level fighters and prospects.