Klitschko will be ringside on Saturday night in Manchester, when Joshua defends his IBF heavyweight title against Eric Molina on Sky Sports Box Office.

If Joshua comes out on top, he will move forward with a fight against Klitschko next year - with the vacant WBA, IBO world titles at stake. 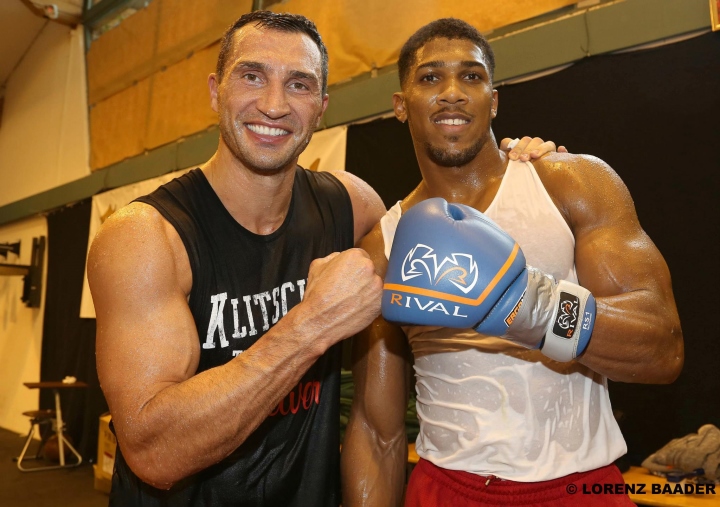 Klitschko has been out of the ring since losing his world titles to Tyson Fury last November. It was Klitschko's first defeat in over a decade. Two scheduled rematch dates fell apart with Fury withdrawing both times. Eventually Fury had a mental breakdown and vacated all of his titles.

Klitschko is hoping that Joshua looks very impressive this weekend.

Two years ago, Klitschko used Joshua as a sparring partner. Back then he was already impressed with Joshua and tabbed him as a future world champion. He admits the 2012 Olympic gold medal winner has gained valuable experience and is obviously a better fighter than he was back then."

"I think he's got even better since we sparred because he definitely gained more experience," he said. "Even in sparring I could see the talent and obviously he was green and not as much experienced when we fought. But since that time which was 2014, in the past two years he has gained a lot of experience, so I was definitely expecting him to be better than in the sparring session."

[QUOTE=Boxing Goat;17277433]I'm not necessarily a Wilder fan but I do notice subtle things he does that makes him very effective. Also, I think he took the Molina fight very lightly, as he probably could afford to after all. Wilder has…

[QUOTE=Scott. Weiland;17275551]Klitschko had clearly lost a step against Pulev, his work rate was dipping by Jennings but I just don't rate Wilder that highly. You say Joshua is open defensively yet Molina never made Joshua do a funny little dance…

[QUOTE=Boxing Goat;17274991]I had him winning against Szpilka and knew the KO would happen. Joshua is too open defensively and my boy Wladimir is too old now. Wlad has clearly lost his reflexes and would not survive a Wilder showdown anymore.…

[QUOTE=Scott. Weiland;17263382]The guy was being outboxed by Szpilka beats both these guys ?[/QUOTE] I had him winning against Szpilka and knew the KO would happen. Joshua is too open defensively and my boy Wladimir is too old now. Wlad has…

Joshua should first fight and defeat Luis Ortiz as a tune up and then he can move to fighting Vlad.