WLADIMIR KLITSCHKO was awarded a ‘green belt’ by the WBC as they opened their 56th annual convention in Kiev in the Ukraine.

Wladimir had earlier given a stirring speech, lamenting that he never fought for the WBC title while it was around the waist of brother Vitali.

And it is because of Vitali, the mayor of Kiev, that the convention has landed in Kiev. 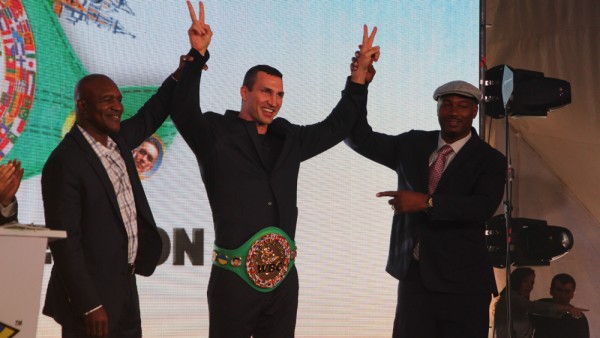 The former heavyweight champion announced the opening of the event and then was joined on stage by old rival Lennox Lewis.

They proceeded to commentate through highlights of their 2003 war in Los Angeles, sharing laughs and jokes.

Lewis closed out saying, “There should only be one belt, the green belt. Throw out all the other belts.” 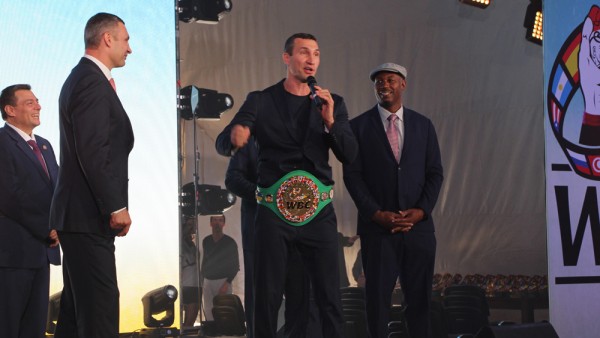 Newly-minted WBC welterweight champion Shawn Porter was also invited to speak by president Mauricio Sulaiman. He said he recalled speaking to Mauricio’s father Jose at the WBC convention in Las Vegas in 2013, with Jose saying one day he would fight for their title.

It was a good-natured way to kick-off the week-long schedule of events and a parade of champions included Marco Antonio Barrera, Amir Khan, Erik Morales, Marvin Hagler, Oleksander Usyk (who showed briefly before heading back to training camp for his fight on November 10 with Tony Bellew), Julio Cesar Chavez, Ricky Hatton, John H Stracey and many others. 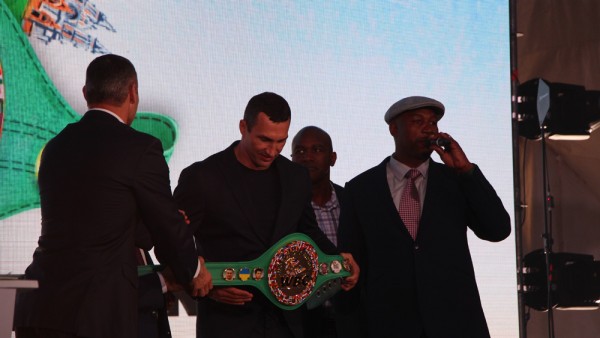 But there are more serious matters are at hand this week.

“You know what we have to be as officials? We need to be better, become better officials, better supervisors and better board members. To lift the WBC where we can because if we lift the WBC we will lift boxing.”

Pathetic. These guys must keep the belt making companies in business

This is great, four legends together!

[QUOTE=BLASTER1;19158112]Wilder has no stamina issues what so ever. Don't know how you came to the conclusion that he doesn't have Stammina?[/QUOTE] Glad we are not in dispute over his lack of skills. Stamina? He fought somebody with the pulse in…

That one time they crown'd Vitali the "Eternal World HeavyWeight Champion." Kind of funny WBC awarded Wlad considering he never got the WBC belt.

[QUOTE=alexjust;19157147]Hard punching - yes. Fast - ok... Skilled? And this is how I know you are full of it. When it comes to "skills" and stamina Wilder is not worthy to tie Wlad's shoes.[/QUOTE] Wilder has no stamina issues what…