On July 15th [July 14 in the UK and America], Pacquiao looks to bounce back from his disappointing twelve round decision loss to Jeff Horn by challenging Matthysse for the WBA "regular" welterweight title in Malaysia, live on BoxNation.

Wright, who was recently inducted into the boxing Hall of Fame, gave his thoughts on the clash when speaking to On The Ropes Boxing radio.

"Anybody who has a good punch has a chance, that’s why they call it a puncher’s chance. If Pacquiao still has the good legs and can move in and out like he does, it’s going to be hard for anybody to beat him," explained the 46-year-old American. 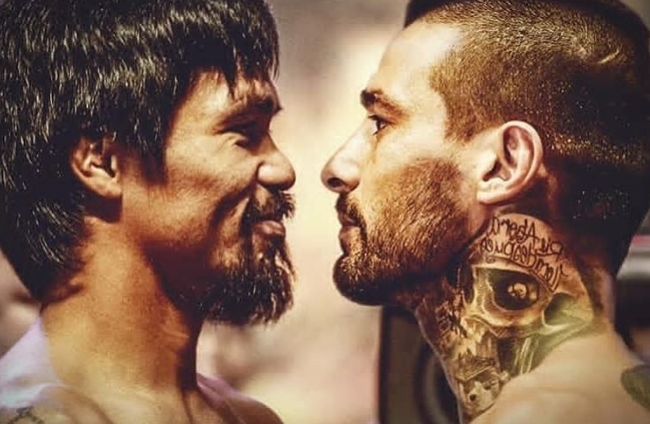 Argentinean bomber Matthysse has a knockout ratio of 82%. With nine of his last 10 wins coming before final bell, the 35-year-old still carries serious power.

Matthysse’s coach Joel Diaz has discussed trying to replicate the tactics of Juan Manuel Marquez, who knocked Pacquiao out cold in 2012 in the fourth and final fight of their epic rivalry. They are working hard to time Pacquiao's movements - a tactic used by Marquez in four fights.

Since suffering that knockout loss in the fourth bout with Marquez, Pacquiao has appeared more cautious in his performances. The Filipino star has not recorded a stoppage victory since 2009. Some observers believe the Filipino legend has lost his nasty streak since becoming a devout Christian.

"If he stays there and just tries to catch Matthysse with a big punch, Matthysse has a good punch and could end it," warned Wright.

[QUOTE=revelated;18919715]Because that stellar KO of Bradley, Vargas, Rios, Algieri...oh.[/QUOTE] im just gonna keep it 100. those guys werent as far gone as lucas is at this point. plus lucas gave up in the postol fight from a punch that didnt…

[QUOTE=siablo14;18919910]Word? He was my favourite fighter. It should have also said former world middleweight champion.[/QUOTE] Lol, I was just playing since I knew some were going to comment on seeing so many Winky Wright articles in the last few days.…