PHILADELPHIA – Julian Williams looked up during an interview Thursday and noticed Jeison Rosario posing for photos a few feet away with members of his team.

Williams learned plenty about what not to do during the buildup for this title defense in his hometown of Philadelphia from how Hurd behaved before Williams upset him eight months ago. When Williams arrived in Fairfax, Virginia, for their press conference, he quickly realized Hurd, from nearby Accokeek, Maryland, was focused on a lot of things other than their 12-round fight for the then-undefeated Hurd’s IBF, IBO and WBA 154-pound championships.

“I try to learn from other people’s mistakes,” Williams said. “I seen it when I walked into that press conference in Fairfax. It was a problem [for Hurd]. I don’t have a big crew anyway. I make sure I don’t have any hanger-ons. I don’t need nobody carrying my bags. I do need some help with all them belts. Them things are a little bit heavy, and I’ve got a lot of belts. But I just try and keep everything simple. That’s the best way I can describe it. Keep everything simple and stay focused. I keep saying it because it’s important. Get this win and move on with the next step in my career.” 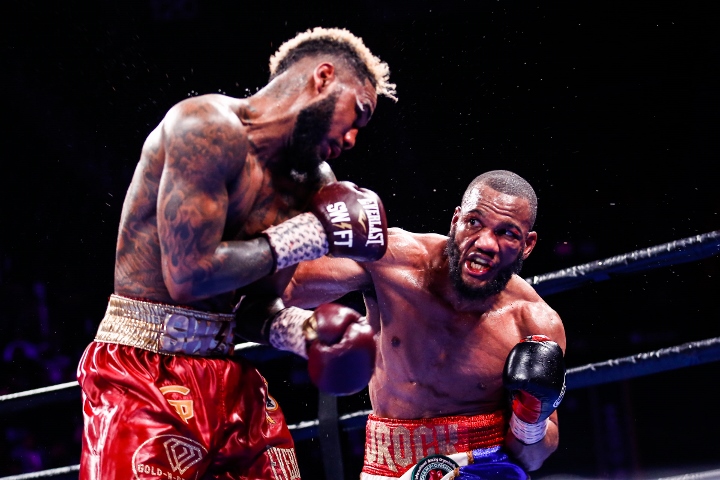 The 29-year-old Williams (27-1-1, 16 KOs, 1 NC) has appeared on Philadelphia television shows and made other stops to promote the card he’ll headline with the Dominican Republic’s Rosario (19-1-1, 13 KOs) at Temple University’s Liacouras Center on Saturday night. Other than that, though, the heavily favored champion has remained focused on the first defenses of his titles in a 12-round fight FOX will televise as the main event of a tripleheader set to start at 8 p.m. ET/5 p.m. PT.

“When you’re about to fight, especially in a hometown fight, other people don’t care that you’re about to fight,” Williams explained. “They think it’s like a party and an event, and it is for them. They don’t realize that the fighter still has to be focused and fight and dominate. When I noticed the way Jarrett Hurd was acting – he had his jewelry on and he had 30 people with him – I knew there was no way possible he could be focused on me, so I took that to my advantage.”

Though fully focused, Williams appreciates the opportunity to defend his titles in his hometown, at an arena that’s about a 15-minute drive from where he grew up in West Philadelphia. Williams hasn’t fought in his hometown in eight years, not since he out-pointed Eberto Medina in a six-rounder in September 2011 at The Armory.

“Honestly, man, I try not to have too many feelings and emotions and be too happy, because you’ve gotta be level-headed,” Williams said. “You can’t get too high up off the wins and too low off losses. So, I try to be level-headed and not focus on the good things. A lot of great things are happening in my life, and I can get distracted by ‘em.

“So, I like to stay focused on the task at hand. And I’ll enjoy all this stuff after I win on Saturday night. Everybody’s different. Some people could like be over here, be over there, and still get in the ring and perform. I can’t do that. I’ve gotta be locked in on the goal.”

Happy to take your straps by brute force maybe

Lol maybe he shoulda waited til after the fact with comments like these.

no you didn't lmao

[QUOTE]“See, they’re happy to be here,” Williams told BoxingScene.com in a disapproving voice. “They’re just happy to be here. I didn’t wanna take no pictures when I went to the DMV [Jarrett Hurd’s backyard]. I wanted to fight. I wanted…