Williams: Hurd Has To Live With Loss In Hometown, Ducking Rematch

Williams thinks he might’ve demoralized Hurd when he upset the then-unbeaten ex-champion in their 12-round fight for Hurd’s IBF, IBO and WBA 154-pound titles. Otherwise, Hurd would’ve welcomed an immediate rematch Williams owed him according to clauses in their contracts for a memorable May 11 bout Williams won by unanimous decision in Fairfax, Virginia.

“Can I be honest? Jarrett Hurd can’t beat me,” Williams told BoxingScene.com after a press conference Thursday for his fight Saturday night against Jeison Rosario. “He does nothing in the boxing ring better than me. He can’t beat me. That’s it. He know it. Go back and watch the tape. There’s no way [he] can go and learn the things I’ve learned over the course of six months. It took me 17 years to learn the stuff that I learned, and grinding and working every day.

“Not saying that he hasn’t been grinding and working, but they’re not gonna change his style in a matter of a fight or two. Boxing doesn’t work like that. He can never beat me. He has a new trainer. And his body dimensions will never allow him to beat me. His arms are too long. He can’t beat me.” 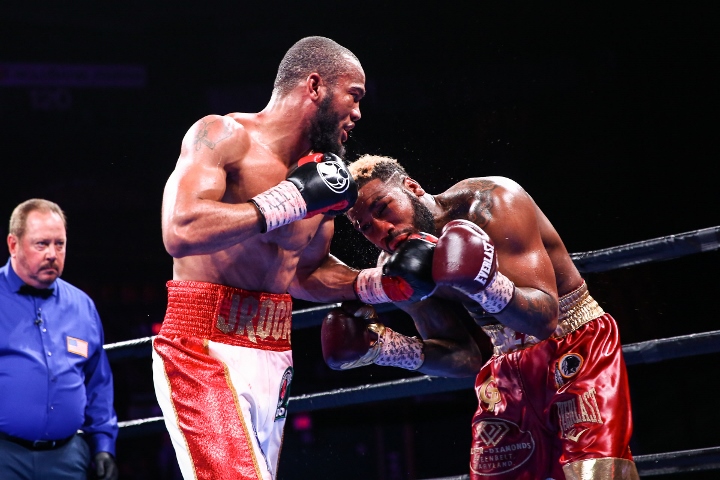 Oddsmakers definitely don’t think Rosario can beat Philadelphia’s Williams, who’ll defend his titles for the first time in his hometown. Most handicappers have installed Williams (27-1-1, 16 KOs, 1 NC) as at least a 20-1 favorite to defeat the Dominican Republic’s Rosario (19-1-1, 13 KOs) in a main event FOX will air from Temple University’s Liacouras Center (8 p.m. ET/5 p.m. PT).

Hurd (23-1, 16 KOs), of Accokeek, Maryland, is an even bigger favorite to defeat Francisco Santana (25-7-1, 12 KOs) in their 10-rounder January 25 at Barclays Center in Brooklyn. Showtime will broadcast Hurd-Santana as part of a tripleheader that’ll feature former WBC welterweight champion Danny Garcia (35-2, 21 KOs) and Ivan Redkach (23-4-1, 18 KOs) in the 12-round main event.

The 29-year-old Hurd told BoxingScene.com last month that he wants to fight Williams after facing Santana, assuming they win their upcoming bouts. Hurd realizes, though, that he gave up his contractual right to a rematch by deciding during the summer that he didn’t want a second fight with Williams next.

[QUOTE=Bandman;20333528]this article did not age well lol. Rosario shocked me too. 20-1 underdog![/QUOTE] Public Perception ... Creates the odds... Rosario had no Name recognition... in His area of the World, he received Good Fundamental Teaching Training and tough opposition...coming up...

[QUOTE=Beterbiev#1;20333491]:rofl: :rofl:[/QUOTE] Man is Caleb next? Either way Julian mocked Hurd none stopped & he ended up schooled in his literal backyard unlike Jarrett Swift who's really from Maryland LMAO! :dance: