Wilder's KO Of Breazeale Peaked At 990K Viewers For Showtime

According to figures released Tuesday by Nielsen Media Research, the Wilder-Breazeale bout attracted a peak audience of 990,000 from Barclays Center in Brooklyn. The peak viewership includes those that watched the fight live on television and those that streamed it live.

Their two-minute, 17-second fight, the main event of a three-bout broadcast, drew an average live viewership of 886,000 via linear television and streaming. 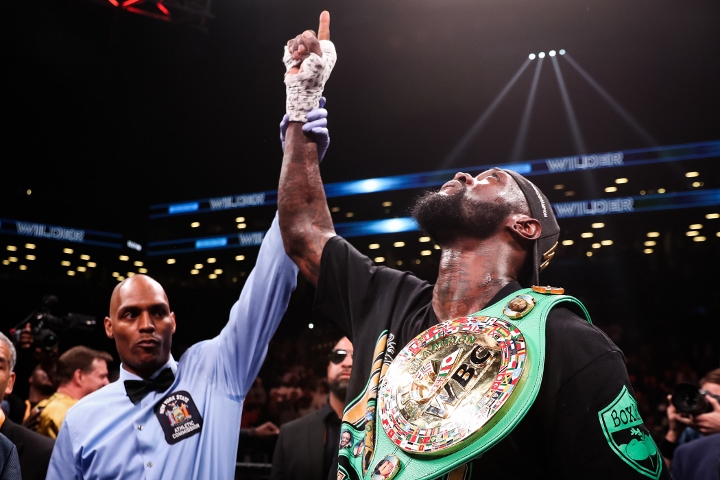 A total of 1,100,000 viewers watched Wilder-Breazeale live on TV, live through streaming, On Demand and on replay Sunday morning.

Wilder drilled Breazeale with a right hand to the side of his head, which left the 6-feet-7, 255-pound challenger flat on his back. Breazeale (20-2, 18 KOs) attempted to get up, but referee Harvey Dock counted to 10 before Breazeale could reach his feet.

Wilder’s previous appearance on Showtime – an intriguing 10th-round knockout of Luis Ortiz – peaked at 1,200,000 viewers in March 2018. Wilder-Ortiz, which had much more time to build viewership, was watched by an average audience of 1,100,000.

Showtime’s telecast of Wilder-Breazeale aired at the same time as Game 3 of the NBA’s Western Conference Finals. That game, which Golden State came back to win against Portland, drew an average of 7,247,000 viewers, the second-highest viewership ESPN ever has attracted for an NBA conference final game.

[QUOTE=champion4ever;19767964]Sid, I am touched. You want to lead me to the light of salvation. That's awfully nice of you. It's ironic, because I thought I was the one who was leading you to the light by showing you how flawed…

[QUOTE=champion4ever;19767926]Sid, you don't agree that Eddie Hearn needs to sign that Wilder vs Joshua fight as soon as possible and especially before the September 2020 deadline when his two year window at DAZN closes because if he doesn't he's out…

[QUOTE=champion4ever;19767893]Sid, I apologize about that mate. I didn't mean to offend or upset you with my comments. I was just responding to the many haters and trolls who were wishing and hoping for Deontay Wilder's demise. P.S. I am neither…

[QUOTE=Motorcity Cobra;19765119]Why would I be salty that I live in a place others risk life & limb to get here? Fighters come to America to be superstars. The HW division was dead when Wlad started fighting mostly in Germany. But…

[QUOTE=Sid-Knee;19763596]Go read up on the story of Netflix to see how stupid this is. I'm here to help you, man. Let me guide you. I'll lead you towards the light. I'm your salvation.[/QUOTE]Sid, I am touched. You want to lead…