Wilder: Wouldn't Be Talking Fury If We Had Same Ref From Ortiz Fight

LAS VEGAS – If Kenny Bayless were the referee for his draw with Tyson Fury, not Jack Reiss, Deontay Wilder feels there’d be no need for their upcoming rematch.

The WBC heavyweight champion implied during a post-fight press conference Saturday night that Bayless would’ve waved an end to his fight against Fury once Fury went down hard during the 12th round last December 1 at Staples Center in Los Angeles. Reiss was widely applauded for affording Fury a chance to get up from Wilder’s vicious right-left combination because Fury somehow reached his feet and came back to land hard shots on Wilder before the final bell sounded. 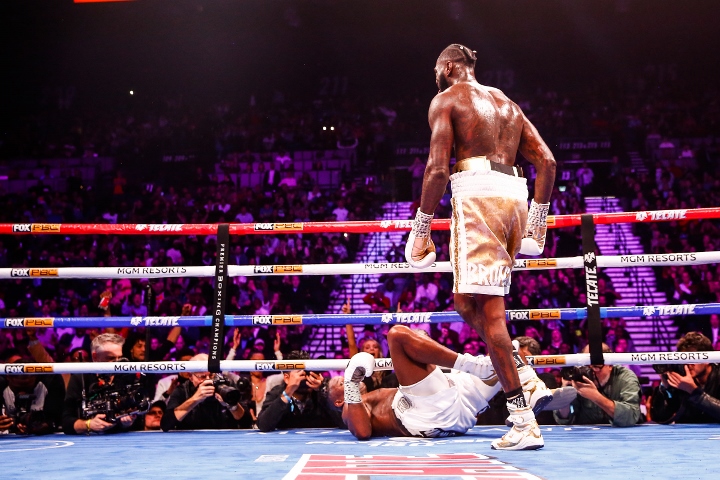 “The way that he fell,” Wilder said, “and the way his body language was looking, you know, one side of me was like, ‘Man, he can’t get up.’ You know, I looked back again to make sure he wasn’t getting up. And I think the referee did a great job of stopping that fight. If we would’ve had him in the Fury fight, we wouldn’t be talking about a Fury [rematch] right now.”

England’s Fury (29-0-1, 20 KOs), who first was dropped by Wilder in the ninth round, displayed incredible recuperative powers after Wilder floored him a second time with 2:21 remaining in their 12-round fight.

The Alabama-based knockout artist’s combination sent Fury flat on his back, as if the lineal heavyweight champion were unconscious. Unlike Ortiz in the seventh round Saturday night, it initially didn’t appear as if Fury would be able to continue.

Fury began getting up once Reiss’ count reached six.

Ortiz, meanwhile, complained that Bayless should’ve allowed him to continue because there were only nine seconds to go in the seventh round when Bayless halted their scheduled 12-round rematch at MGM Grand Garden Arena.

“My only gripe is,” Ortiz said during the post-fight press conference, “obviously I really feel that being a championship fight, it’s a grudge match and the ref probably could’ve just let it go on. There was eight seconds left, seven seconds left. Let’s see what happens. [I could] recover in the corner. You know, give me the benefit of the doubt. It is what it is now, but I’m very upset that didn’t happen because I’m a fighter. I wanna fight. You know?”

I dunno, that's kinda weak talk. I don't like it. Fury could be saying the same about the judges. There have been plenty instances of judges partial to a certain style, bad judging, bad reffing, refs stopping too soon or…

[QUOTE=champion4ever;20214898]That is so very true. Tyson Fury wouldn't have never gotten up in time from that second knockdown in the 12th had Kenny Bayless been the referee. He would have been counted out.[/QUOTE] Ortiz goes down at 33:05, Bayless waves…

That is so very true. Tyson Fury wouldn't have never gotten up in time from that second knockdown in the 12th had Kenny Bayless been the referee. He would have been counted out.

Boxing fans correct me if I am wrong. When you watch the knockdown Wilder is referring to in the link below, do you notice what I do. When you knock an opponent down, you retreat to the neutral corner RIGHT…