Wilder, Pulev Refuse To Step Aside As Fury-Joshua Talks Begin

News of the first steps taken towards creating an undisputed heavyweight champion has already generated a buzz to the point of it sounding too good to be true.

That’s because it is too good to be true.

A major development first reported by ESPN’s Mark Kriegel revealed initial talks taking place between representatives for Tyson Fury (30-0-1, 21KOs) and Anthony Joshua (23-1, 21KOs) for a colossal showdown somewhere down the road. The pair of British behemoths own all of the relevant heavyweight hardware between them, with such a fight undoubtedly to go down as the biggest in the history of boxing in the United Kingdom.

Fury—who is co-promoted by Bob Arum’s Top Rank and Frank Warren’s Queensberry Promotions—is being represented in negotiations by managerial conglomerate MTK Global, with whom he signed in 2017. MTK has engaged in preliminary talks with Eddie Hearn, Joshua’s career long promoter for a fight which reportedly would take place “in Saudi Arabia or elsewhere on the Arabian Peninsula” according to the ESPN.com report. 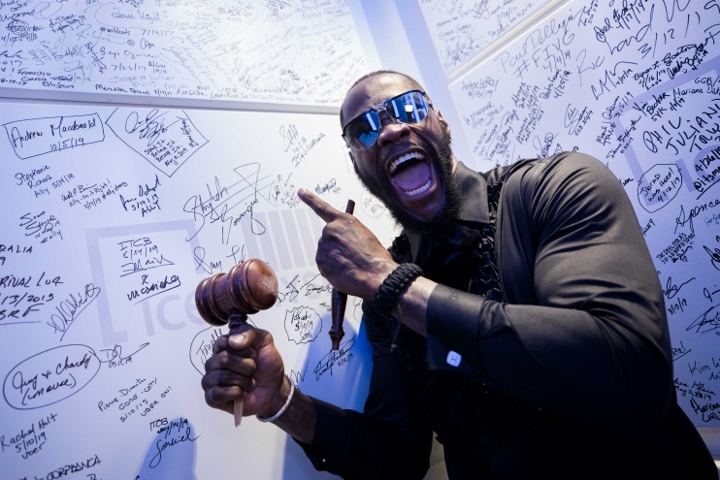 Two major roadblocks stand in the way, however—the two boxers who already have air-tight deals in place for title fights versus each of them. Both are awaiting for new dates on fights that were postponed due to the ongoing coronavirus disease (COVID-19) pandemic, with the expectation of it being their first order of business once boxing events with fans in attendance are able to resume.

Manchester’s Fury is locked into a third fight with Deontay Wilder (42-1-1, 41KOs), the former heavyweight titlist from Tuscaloosa, Alabama. Their rematch took place this past February at the MGM Grand Garden Arena in Las Vegas, with Fury scoring a 7th round knockout to enter his second reign as lineal heavyweight champion.

Fury also claimed Wilder’s World Boxing Council (WBC) title which he held for more than five years. Their bout came nearly 15 months after their first fight, which ended in a disputed 12-round draw atop their December 2018 Pay-Per-Event from Staples Center in Los Angeles.

The rematch came with a bilateral rematch clause allowing for the losing boxer to call for an immediate third fight. Wilder did just that, exercising the clause less than a week later and his stance not changing at all in the two months that have since passed.

“As far as we are concerned, the next fight for Deontay Wilder is the third fight with Tyson Fury,” Shelly Finkel, Wilder’s career-long co-manager told BoxingScene.com. “Unless we are told different, those are the only plans we have for Deontay’s next fight.”

As mentioned in the ESPN.com story, a Fury-Joshua fight would require step aside fees to be issued to Wilder as well as Kubrat Pulev (28-1, 14KOs), the longtime mandatory challenger in waiting.

Pulev has served as the top heavyweight contender with the International Boxing Federation (IBF) since outpointing Hughie Fury—Tyson’s cousin—in October 2018. The one-time title challenger from Bulgaria already reluctantly stepped aside for an owed shot at Joshua, who was permitted to enter a rematch with Andy Ruiz last December, with a written order demanding the winner next face Pulev.

Joshua won a 12-round decision to win his slew of heavyweight belts he lost in a 7th round knockout at the hands of Ruiz last June in New York City. The wildly popular Brit was due to face Pulev on June 20 at Tottenham Hotspur Stadium in north London, with the show postponed along with every other in the United Kingdom since mid-March.

A new date has yet to be issued, primarily since there is no set timeframe for when the sport as a whole can return to normal. None of that disqualifies what is already written on paper.

“That clause was covered very well,” Ivaylo Gotzev, CEO of Epic Sports—Pulev’s co-promoter along with Top Rank—confirmed to BoxingScene.com. “There’s no way out, even though Joshua keeps looking for new ways to avoid us. We have exercised our right to fight for the title we’ve been waiting for years.

“We understand that a fight with Fury and Joshua is big for the United Kingdom. The last we checked, we do not all live under a newly established British Empire. Let’s just all do the right thing and move forward with the fights we have in writing. After Anthony Joshua loses to Kubrat, he can go fight whoever he wants.”

[QUOTE=jonnyc420;20544320]Wilder wants to get paid, he knows he can't beat Fury, but he wants that air time and that nice paycheck. After the 3rd fight he will never receive the same attention. He will go back to smoking pot and…

[QUOTE=KnickTillDeaTh;20546085]I may lack tact, but my interest was only to share knowledge and have a conversation, as so many things here usually do, someone feels attacked and the convo devolves. By the way Duva didnt request a special rule. What…

After Fury beats him again, Wilder should be pushed to WBC mandatory fight, if he wants another shot.

[QUOTE=KnickTillDeaTh;20546392]Some on here were saying that, but I never actually saw the quote, nor did I look for it. The $40 million that Wilder was offered was also a flat fee. AJ was goin to keep 100% of the PPV…

[QUOTE=2ndroundko;20546323]forgot about that bs. didnt skipper admit after that he screwed up?[/QUOTE] Some on here were saying that, but I never actually saw the quote, nor did I look for it. The $40 million that Wilder was offered was also…