WBC heavyweight champion Deontay Wilder was not a happy camper when BT Sport showed him a video of Tyson Fury mocking his boxing style.

Wilder will defend his belt against Fury on December 1, at Staples Center in Los Angeles, California. The contest will be carried by Showtime Pay-Per-View and BT Sport Box Office.

Fury is only in the third fight of his comeback that began earlier this year. He was inactive since shocking the world when he won a twelve round unanimous decision over then heavyweight king Wladimir Klitschko for the WBO, IBF, IBO, WBA world titles in Germany. 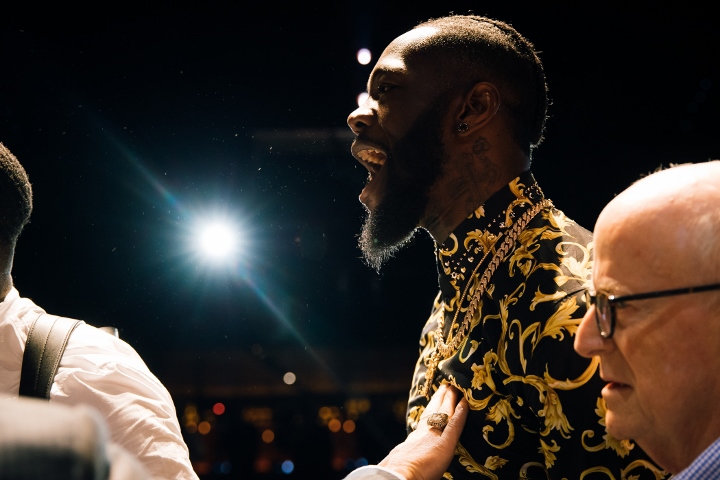 Fury believes the time is right to take Wilder to school.

He's not impressed with Wilder's style of fighting, and believes the unbeaten banger is nothing more than a windmill puncher.

“Deontay Wilder, what’s he going to do follow me around the ring like this all day, looking for a punch? And if he can’t land it he’s f****d isn’t he,” Fury said.

Fury is known as a master of playing mind games. He mentally collapsed Klitschko, who up until that fight had never been penetrated in that manner.

Wilder expected a lot of pre-fight banter from 'The Gypsy King' and he's done his best to ignore it.

But he was still a bit annoyed after watching the video footage of Fury mocking him.

“This is what we are training for, I’m training for him so my mindset and mentality is different right now. When I look at him, I’m wanting to hurt him,” Wilder said.

“At this point in time, it’s all about the pain that I’ve got to bring come December 1st. All the so over, this is serious business now. He can talk, but come December 1 he got to show some action. And that’s my jungle then, and I’m all about action."

[QUOTE=Vinnykin;19241952]Wilder's angry! Fury is already in his head..... and it's only going to get worse come fight week.[/QUOTE] Would not be shocked at all if Fury toys with him in the ring using the jab, outboxing him and staying just…

[QUOTE=landotter;19242116]Much like other posters... fair enough. I did say I thought Fury could win early rounds. But I just do not get why there is love for this guy. He is entertaining out of the ring, and I do think…

[QUOTE=landotter;19241964]Wilder is always angry. That is his secret. (Geeks everywhere will get the reference..) Wilder will fight smart. He will force Fury to come to him. He knows Fury does not have a ton of power and has fought zero…

[QUOTE=landotter;19241964]Wilder is always angry. That is his secret. (Geeks everywhere will get the reference..) Wilder will fight smart. He will force Fury to come to him. He knows Fury does not have a ton of power and has fought zero…