Wilder Manager To Hearn: After Fury Fight, We Can Talk Joshua

But those discussions would have to take place after December 1 - when Wilder defense his world title against Tyson Fury.

Wilder vs. Fury will take place at the Staples Center in Los Angeles, in the main event of a Showtime Pay-Per-View. 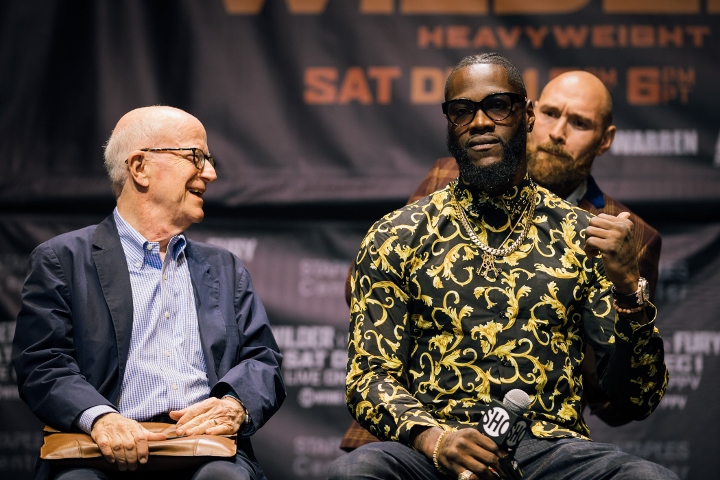 Eddie Hearn, the promoter for Joshua, has complained that Finkel and other members of Wilder's team have refused to negotiate the details of a unification.

"After the fight, of course," Finkel told Sky Sports. "There's nothing to talk about before that.

Whe he was asked if Wilder and Joshua could agree to a fight for 2019, Finkel said: "That's up to them."

Joshua's next fight is scheduled to tale place at Wembley on April 13. Hearn wants to finalize a unification deal sooner than later.

"I want to be in a position where, by December 1, we are done or almost done," Hearn told Sky Sports. "We just have to watch the fight and sign the deal after. There's still a lot of work to do, but at least there's conversation and at least we are discussing the deal points.

"I think everyone wants the fight. The attitude of Shelly is 'we're not making that fight, they're not serious.' Why do they think we keep coming back to the table? It's not for a laugh or to look good. I wouldn't bother. We want to fight Wilder. That's why we are the ones continually and consistently making the effort. Progress is significant in the fact we are talking. In terms of actual progress, it's small. Once the communication lines are open, that's positive, that's all I can say."

[QUOTE=SeGoodland;19206710]There was a lot to read there so I'll try and summarise my response as best I can...if I'm honest, I skim read most of it. 1. You cannot attempt to take ambassadorial about the differences of the British and…

[QUOTE=Marchegiano;19204442]... Not a tinkerbell because he's one of the very few practitioners of the roughest version of boxing and he's very good at what he does even if that isn't what you want to see. With Deontay we have on…

[QUOTE=SeGoodland;19203995]Its funny that you use American 'football' as a comparative opposite of English Football. Would it not be more prudent to compare the levels of toughness required to play Rugby against NFL? Read this---> [url]https://qz.com/150577/an-average-nfl-game-more-than-100-commercials-and-just-11-minutes-of-play/[/url] [B]11 minutes!!!![/B] per game! Shocking.…

[QUOTE=Marchegiano;19201342] It's not a we're not winning so we don't care thing like y'all claim all the time in just about every sport we don't win at. It's because you guys, from the American perspective, are soft. We don't watch…

[QUOTE=Noelanthony;19200639]You are wrong pal and using AJ/Povetkin to justify your argument is just as foolish. It’s like me saying the Wilder is not popular in the U.K. because his all his showing figures here including his last fight vs Ortiz…