Wilder: If Ruiz Wins, We Fight; Joshua is Running From Me!

Deontay Wilder is playing chess in boxing’s glamour division, thinking three moves ahead in order to be the king.

First, Wilder must get past Luis Ortiz in a rematch on Saturday at the MGM Grand in Las Vegas (FOX PPV). If he passes the test with flying colors, and in full health, he’ll turn around to fight Tyson Fury three months later on a previously agreed and announced date of Feb. 22.

Wilder is also an interested observer of PBC stablemate Andy Ruiz’s rematch with Anthony Joshua. Wilder, the WBC champion, is hoping Ruiz, the WBO, WBA, IBF and IBO titlist, holds his respective end of the bargain before meeting in the second half of 2020 to unify the heavyweight division championships.

“If Ruiz wins, we’re definitely going to fight. With Joshua, I’m not holding my breath. They don’t want to fight me, and I don’t think they ever want to fight someone like me,” Wilder told BoxingScene.com in an interview. “Which is fine, because people can’t be manipulated anymore. A lot of people are already predicting that if Joshua wins, there will never be a unification fight with me. They understand after Ruiz beat him as to why he was running from me. I wash my hands from that situation. I’m not going to put too much energy because they would never want to fight me. I’m too dangerous.

“I’m the only fighter who walks it like he talks it. I talk my sh-t but I back it up every time in devastating knockout fashion. People love a showman who can talk, but ones that can actually fulfill it. That’s what I give to people.” 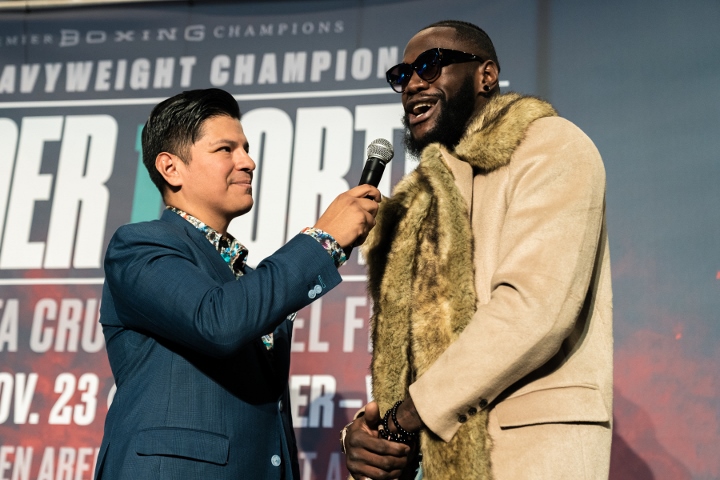 The 34-year-old Wilder will be in the heavyweight picture for the foreseeable future, saying that he will retire at the age of 40.

“Many people can’t even walk out of the tunnel, let alone walk in the ring,” said Wilder. “I only have six years left of this sport and I’m out of here. My good deed will be done, and I will be free, leaving as the baddest man on the planet.

“I have tremendous power in this sport of boxing. I’m the baddest man on the planet. I’m the best in the world when it comes to boxing. What other fighter do you know fighting guys who are 20 to 50 pounds heavier? And I still knock them out in devastating fashion.

“I’m just happy to be who I am. God has blessed me. I am the man, and I know my position and where I stand. I’ve been saying it for years, and now, people are finally opening their eyes. The tables have turned and the conversations have reversed about me. People have nowhere to go anymore other than understand and recognize that I am the man in boxing.”

You needed retirement money first doe and a rematch clause. You behaved like you're the A-side, and the 3 titles that were on the line didn't even make you think hard. And now they were in Ruiz's possession who had…

[QUOTE=REDEEMER;20205667]Wilder never wanted the AJ fight ,he always lets the public know when hes going to avoid or plain out duck someone by saying they don't want the fight but doesn't he know the fans wanted him to take the…

Let's see if AJ goes chasing the KO with Ruiz again after seeing Wilder win by KO tonight. Cannot wait for this 50/50 fight on 7 Dec.

If Joshua wins the rematch, Hearn better find every possible way to keep his Nigerian prince away from Wilder. With Joshua's glass chin and Wilder's devastating power, Joshua might suffer a life altering KO.