Wilder: If Fury Feels He Won, I Should Be Easy; He Shouldn't Run

Deontay Wilder doesn’t believe Tyson Fury’s decision to sign with Bob Arum and ESPN was based on money.

The WBC heavyweight champion suspects that Fury, having felt his power in the ninth and 12th rounds of their draw three months ago, eventually decided it wasn’t wise to embrace an immediate rematch. Arum and Fury announced February 18 that the lineal heavyweight champion has signed a multi-fight contract with Arum’s Top Rank Inc.

Some media outlets have reported the deal will pay Fury approximately $20 million per fight. That’s more than Fury would’ve earned for a Showtime Pay-Per-View rematch with Wilder, but Arum himself has refuted that the contract will pay Fury that much money on average. 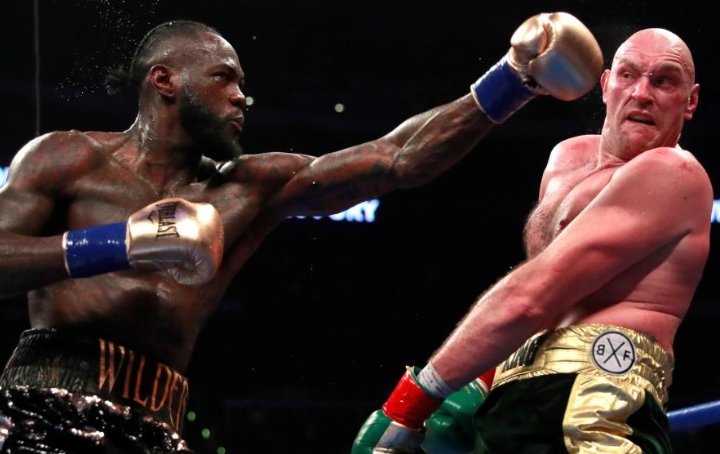 Defeating Wilder in a rematch would’ve made Fury more valuable on the open market, assuming Frank Warren would’ve continued seeking a promotional partner for his fascinating, undefeated fighter from the United Kingdom. It’s unclear now, though, whether Wilder and Fury will fight again later this year – if at all.

“He had the contract in front of him, and he refused to sign it,” Wilder told BoxingScene.com. “Instead, he went over to ESPN and made a deal with them, knowing that he didn’t wanna fight me next. He knew this. I mean, many times Fury thought after the fight between me and him about that replay of him getting knocked [down], his brain getting splattered on the canvas, his veins into the front of his body, while his body’s stiff on Cloud Nine. He repeats that over and over again, as his family discussed that terrifying moment that they had when they seen their loved one land on that canvas like that. You know, they went over all this in their head and this boy don’t wanna fight me again, unless he really, really has to.”

Wilder (40-0-1, 39 KOs), of Tuscaloosa, Alabama, floored Fury twice – once apiece in the ninth and 12th rounds – during their December 1 fight at Staples Center in Los Angeles.

The 30-year-old Fury probably will make his Top Rank debut in June or July in a fight ESPN+ will stream. Fury’s opponent and the site for that fight haven’t been solidified, either.

Wilder, meanwhile, is expected to make a mandatory defense of his title against American Dominic Breazeale (20-1, 18 KOs) in his next fight. Negotiations are ongoing, but the Wilder-Breazeale bout is likely to take place May 18 at Barclays Center in Brooklyn – the same date and venue that had been reserved for the Wilder-Fury rematch.

“Like I’ve said, he had the contract on the table to sign, and he didn’t do it,” Wilder said. “He went to ESPN and now he’s calling for a tune-up fight before he wanna fight me. But then he went around and said that he won. You’re not showing the signs of a winner, because if you really, truly feel you won, then I should be easy. You shouldn’t run away. In America, we don’t do that. If you believe you won and I believe I won, what do we do? We run it back? We don’t tolerate anything less than that.”

[QUOTE=Sid-Knee;19556487]He hasn't acknowledged ****. Wilder thinks he won the fight and anyone who disagrees, is sick in the head according to him. Go and read the weirdos Instagram.[/QUOTE] Hahaha, ok, I gotta admit I don't read Instagram, thanks.

[QUOTE=CharlieStewart;19558635]Willing to fight anyone anywhere, except klitchko for undisputed, or Joshua for undisputed and 40%, or fury in the uk, or whyte, or povetkin, or Parker for unification, or basically any top 10 heavyweight who isn't overweight and inactive. 41…

Wilder doesn't want to fight outside of the US. It's a shame really.

[QUOTE=Sid-Knee;19556463]JKP isn't American. He's a bitter New Zealander who's running a smear campaign against both Whyte and Joshua because he said Parker would knock them both out. When Parker lost to them, his bitterness has been off the charts. Pretty…

[QUOTE=Jkp;19556143]Keep up. They can't make offers to wilder when they are already booked in another bum to fight. Anthony Johnson has fight booked against big bum miller.[/QUOTE] Miller is the only one shouting for it, wilder clearly wants something not…