Wilder: If Fury Were Confident, He Wouldn't Have Changed Trainers

The way Wilder views it, if Fury truly believed he is as better than Wilder as he says, the lineal heavyweight champion wouldn’t have made so many changes while preparing for their rematch Saturday night in Las Vegas. Most notably, Fury fired trainer Ben Davison in December and replaced him with Javan Steward, the late Emanuel Steward’s nephew.

Davison had trained Fury throughout his comeback from alcoholism, cocaine addiction and depression, including his controversial split draw with Wilder in December 2018. The 6-feet-9 Fury also has said he’ll come in at about 270 pounds for their second fight, nearly 15 pounds heavier than he was when he withstood two knockdowns at Staples Center in Los Angeles. 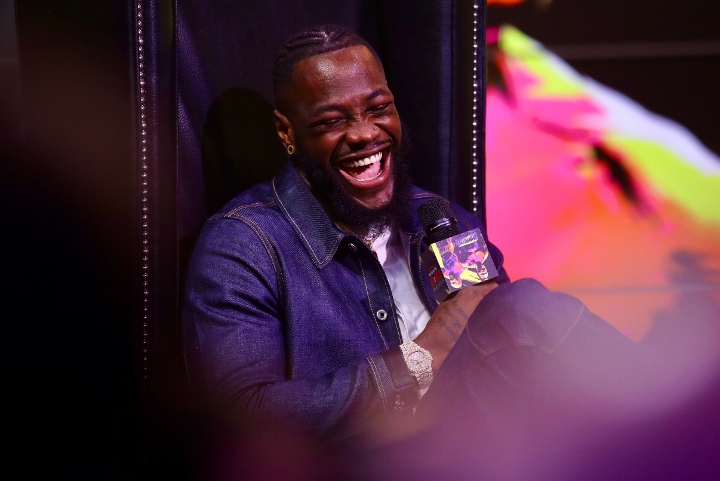 Fury trained in a different city for their rematch (Las Vegas) than he did while preparing for their first fight (Big Bear Lake, California, and Hollywood, California).

“To be honest, I really think it’s nervous energy from the first fight,” Wilder said during a conference call recently. “You know, he can go on and say that he beat me [by] a wide margin, but he don’t believe that. He honestly, really don’t believe that. And that’s why he wanna change up a lot of things. Because if he did really, really believe that, you wouldn’t change up so much. He done changed up from where he train at, to trainers, to now he’s putting his hand in gasoline to try to make ‘em harder[KI1] . You know, he done brought so many people in his camp. It’s just so much going on, it’s so much to keep up with, all the changes. I mean, next he’s gonna go see a spiritual adviser. That’s gonna be the next thing he’s gonna do to ease his mind, you know, with what’s about to happen to him and his body come February 22nd.”

The hard-hitting Wilder reiterated that he suspects Fury doesn’t really want to fight him again. After feeling his pulverizing power in their initial battle, the Alabama-based knockout artist senses Fury’s preference would’ve been to continue making millions for facing far less dangerous opponents.

“All in all, as a fighter, we must do the things that we feel is gonna give us confidence up in the fight,” Wilder said. “I don’t think his confidence is that high, up in the fight, when they’re dealing with me because of the state of being that I left him in. I gave this man a concussion. At the end of the day, a concussion is a concussion. And it’s easier to happen again the second time around because the head is not meant to be hit, especially by no power like Deontay Wilder’s.

“You know, he got a lot to think about come the 21st, [the day] before the fight. He’s gonna be really thinking a lot that night. And when the fight happens on the 22nd, uh-oh, he in trouble now! You know, so I can’t wait, man. This is the moment in time for the heavyweight division. This fire is lit. It’s on fire. And I’m planning on keeping it that way. As the heavyweight champion of the world, I’m planning on keeping it exciting, you know, for everyone. It’s back. The heavyweight division is back, baby.”

The 34-year-old Wilder will attempt to make an 11th successful defense of the WBC heavyweight title he won from Bermane Stiverne in January 2015, also at MGM Grand Garden Arena.

Fury laying a beat down :headbang:

If Fury truly believes he beat Wilder by a very wide margin, why even change trainers. Do what you do best and box your way to a decision just like you did against Wladimir. Something doesn’t smell right or add…

Wilder sounds nervous, talking more bollocks than usual. Only thing Fury isn't confident of is getting a fair result, not after last time.

Wilder concussed him once already. It will be easier to do it again now.

Wilder tryna talk himself into a win. Whatever makes him feel better actually because he's going to need all the luck he can get...Saturday it's a 80% chance he's losing to fury