Wilder: I Want To Deteriorate Breazeale's Face, Demolish Him!

WBC heavyweight champion Deontay Wilder says that he's on a mission to do a lot of damage on Saturday against mandatory challenger Dominic Breazeale, at the Barclays Center in New York. Showtime will televise.

Wilder told PodcastOne Sports co-hosts Jim Litke and Tim Dahlberg that he wants to settle his dispute with Breazeale by battering him with big punches from all angles.

''I want to demolish him. I want to deteriorate his face,'' Wilder said. ''It's all bad intentions.' 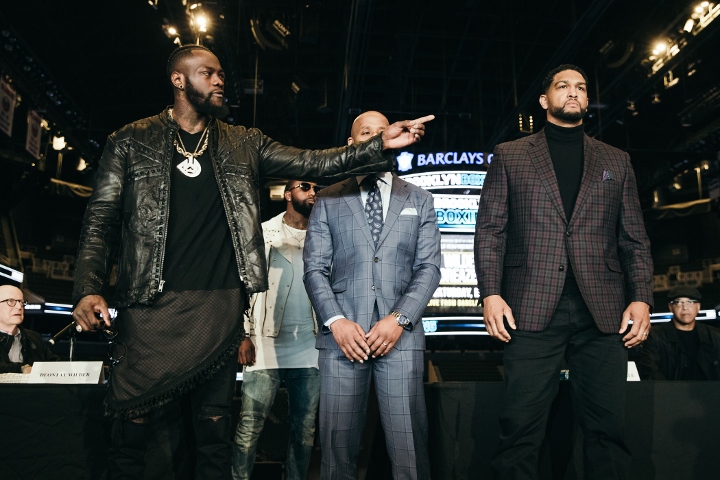 Wilder and Breazeale were involved in a physical confrontation two years ago, in a hotel lobby in Alabama.

The hotel scuffle led to an actual lawsuit, when Breazeale made claims that Wilder attacked him without provocation.

Wilder, beyond his upcoming fight, is hoping to get a showdown with either Tyson Fury or IBF, IBO, WBA, WBO world champion Anthony Joshua.

Both Joshua and Fury will be in action next month.

On June 1, Joshua will make his American debut when he defends his four belts against once-beaten Andy Ruiz at Madison Square Garden in New York City.

And Fury is back on June 15th, when he makes his Las Vegas debut with a non-title clash against unbeaten Tom Schwarz.

According to Wilder, he's been trying his best to make deals to face his two biggest rivals, but neither man has stepped up to the plate.

Wilder was close to a deal for a Fury rematch, but their talks fell apart when Fury signed a promotional agreement with Top Rank, who have an exclusive content deal with ESPN.

“The excitement is back in the heavyweight division,” Wilder said. “The fire is lit.

“Go back and study it. Go back and see, who really is the king of the division? Who really tried to make these fights?”

[QUOTE=Bonduu;19749232]Yeah, best talking BS artists just like Canelo and Anthony Joshua right? GTFO you know nothing about modern boxing...go watch netball.[/QUOTE] No like Mayweather. Those other two guys don’t have any personality BUT ONE CAN FIGHT.

Lets see if everything Bronze Bomber said manages to make this fight a hit with the attendance, Showtime viewers

[QUOTE=MONGOOSE66;19746479][B]The best talking bull***** artists make the most money.[/B]Its the business. Hes got u talking about him. I actually like Fury. Closest to a real fighter with balls. Cant say that about heavily protected Joshua. Those two should of ALREADY…