Wilder: I Wanna Go Out On My Shield; Death Is Better Than Defeat

Deontay Wilder knows people don’t understand why he has stated numerous times that he “wants a body on his record.”

The hard-hitting former WBC heavyweight champion doesn’t expect people to understand, either, his insistence on going out on his shield, even if it means dying in the ring. But that’s the way Wilder feels.

It’s why Wilder remains “hurt” by assistant trainer Mark Breland’s decision to throw in the towel during the seventh round of his rematch against Tyson Fury on Saturday night in Las Vegas. 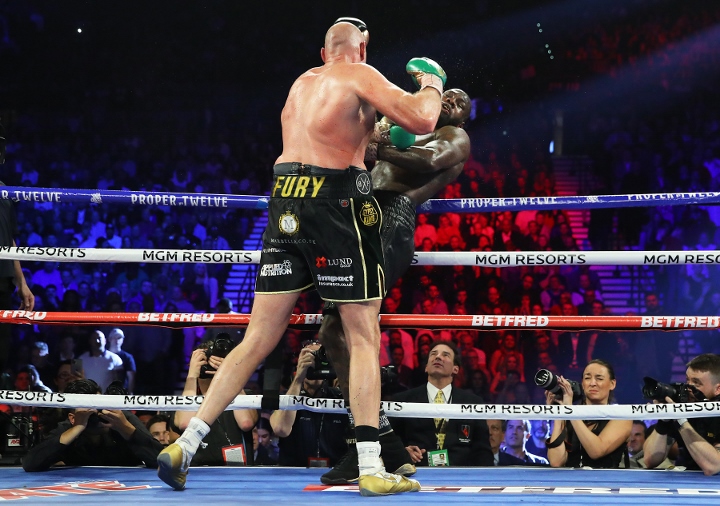 Breland believed Wilder was taking too much punishment in what had become a one-sided fight and has been widely applauded for stopping it. Fearful for Wilder’s long-term health, Breland threw in the towel even though Wilder always has instructed him never to do that.

Jay Deas, Wilder’s head trainer, also told Breland not to throw in the towel when Breland first mentioned it earlier in the seventh round.

“My people, all my guys know that I’m a warrior,” Wilder told BoxingScene.com. “I fight on my shield, and that’s what I abide by. Look, if I say I’m gonna kill a man in the ring, I’m gonna abide by that same principle as far as receiving that same punishment. I always said my pride would get me killed in life. I’m talking about speaking things into existence, believing it would happen that way. So, I have to abide by the same principle of the reaction of what I abide by.

“They know this isn’t an emotional thing to be said. This is something that’s already been premeditated, already been discussed in many, many years, [before] many, many fights. I said that no matter what it might seem like on the outside of the ring, no matter how you’re feeling – and I understand what it looks like sometimes and you don’t wanna see nobody get hurt, you don’t wanna see the one you love get hurt and all that – and all that stuff’s good. But I told them my wishes are, as the fighter, as the one in the ring, I wanna go out on my shield. Fury’s the same way. He said that to his team, ‘Do not ever throw that towel in.’ When you have a warrior and the mindset is so strong, death is better than defeat because if you’re gonna get defeated in the ring you’d rather die in the ring, doing something that you love to do. And I’m every bit of that.”

Fury scored two knockdowns Saturday night, one apiece in the third and fifth rounds. Wilder contends he was more tired than hurt and that he was in much worse shape when Luis Ortiz hurt him with about 40 seconds to go in the seventh round of their first fight in March 2018 at Barclays Center in Brooklyn.

The 34-year-old Wilder (42-1-1, 41 KOs), of Tuscaloosa, Alabama, plans to exercise his contractual right to an immediate third fight against Fury (30-0-1, 21 KOs), of Manchester, England. The date and site for their third fight haven’t been determined.

Why do people spell curse words correctly when they argue here? Do you think calling someone a phaggot instead of ****** helps you be the bigger man or something? Lmao

Wilder: I Wanna Go Out On My Shield; [B]Death Is Better Than Defeat[/B] :haha: The Alabama Bum is funny Death is the ultimate L.

It’s just of the little fphaggot who learned very quickly not to troll yours truly. I found his social media, befriended him and learned he’s a closet queer. Now he’s paying the price for his fphaggotry! [QUOTE=jreckoning;20427961]What the everloving ****…

[QUOTE=1hourRun;20426117]If the ref in the trilogy is as blind and negligent as Kenny Bayless, yeah Tyson might win breaking all the rules again. Dignity is also defined as : a sense of pride in oneself; self-respect. The state or quality…

[QUOTE=BoomBapTrap;20429187]That’s ultimately dumb. Death IS defeat. It’s even worse. It’s the worst possible outcome.[/QUOTE] True and you don't get a rematch with death.:dead::ugh: