Wilder: I Really Don't Care Whether Mayweather Comes Back!

The timing of Mayweather’s announcement drew criticism because it deflected attention away from the promotion of Wilder’s pay-per-view event November 23, at least temporarily. Mayweather’s company was a co-promoter of the Wilder-Ortiz show, which was distributed by FOX Sports.

Mayweather, 42, didn’t specify an opponent or a date for his comeback in 2020, or if it’d be for a fight that officially counts on his perfect record (50-0, 27 KOs). Boxing’s biggest star hasn’t participated in a fight that counts since he stopped UFC superstar Conor McGregor in the 10th round of their August 2017 boxing match in Las Vegas. 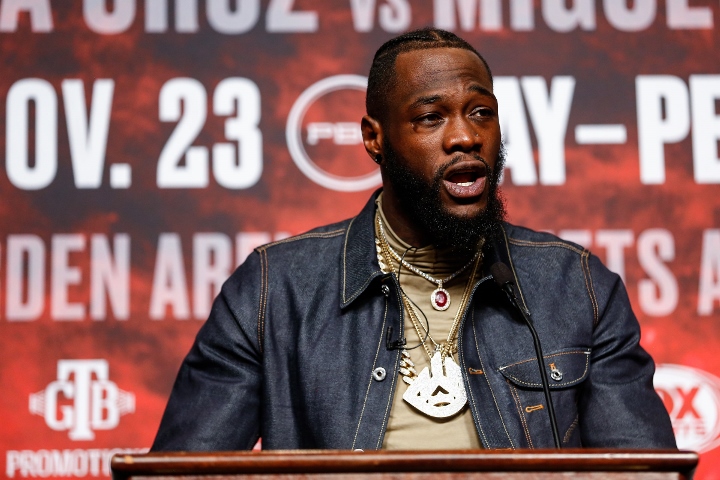 Wilder, meanwhile, doesn’t know why Mayweather chose the night of November 21 to make his intentions known through his social media platforms.

“I have no idea,” Wilder said during a recent interview that aired live on Tha Boxing Voice’s YouTube channel. “You know what I mean? I mean, it’s so many different things that could be said about it. But, you know, it is what it is. Let him do what he do. You know, whether he come back or not, that’s up to him. Personally, I really don’t care. You know, it’s not stopping nothing over here. Even if he announced something during that time, as you can see, it didn’t stop nothing. And it’s not gonna stop nothing. You know, I’m my own entity. I’m my own man. I do my own thing. And my reputation and where I’m going, no one is gonna be able to touch it. No one. No matter what.”

The 34-year-old Wilder (42-0-1, 41 KOs), who was behind on all three scorecards through six rounds, knocked out Ortiz (31-2, 26 KOs, 2 NC) in the seventh round of their 12-round rematch at MGM Grand Garden Arena in Las Vegas. FOX Sports hasn’t released the number of pay-per-view buys the Wilder-Ortiz event produced.

Regardless, the hard-hitting, unbeaten WBC heavyweight champion criticized the wealthy Mayweather’s habit of flaunting his lavish lifestyle later in his interview with Tha Boxing Voice.

“You know, and I see a lot of things and I read a lot of things,” Wilder said. “And the people are on my side, man. You know, the things I talk about, the things I stand for and represent as a champion, they sees it. My work is not going [unnoticed]. I got the culture, man. I got the people behind me. I love my people. It ain’t all about money and this and that, because money is materialistic, bro. That come and go. But when you have loyalty, respect, dignity and pride from the people, inspiration, I got mens that’ll run through walls for me – literally. Man, it’s crazy. But it’s just like the motivation they see from me, as a black man, to stand up for what is right. And everyone don’t always wanna hear about what can be bought or what they have. … Let’s face it – a lot of us in America, a lot of people will never get the opportunity to experience what a luxury life looks like or even feel like. So, really, that’s just puttin’ sh-t in people face. At the end of the day, it can [only] be so much motivation, until your only talk is about materialistic things. That ain’t motivating people. That ain’t moving people, you know? And what I’m doing as a champion, and how I’m building my legacy for the people – and really for the people, especially my people, because I love all people, but I love my people; everyone else loves theirs – and when you have a champion that loves his people, man, it’s different.

“Bro, when I go places, I don’t have a worry in the world. No matter how dangerous it may be [portrayed], or how safe it is, I don’t have [to worry] because of what I stand for. And people see it, and they know it. People know bullsh-t when they see it, bruh. And with me, I’m just – I get amazed and I get overwhelmed when I go places and certain people come up to me and how they’ll break down to me. No matter if they a killer in the streets or whatever, bro, they’ll break down and tell me they respect me and they appreciate what I’m doing, and how I’m inspiring them to be great, bro. That sh-t, when you have men coming, break down and cry to you, bro, that let me know that I’m on the right path. No matter how many haters I may have in this world, or what they say that I am, you know, I know I’m affecting the world. I’m an influencer. I’m a trendsetter. And when I have so many people coming up, grown-ass men, you know, to break down, I know I’m in the right direction. I’m a leader of men. And when you have the respect like that from the people, you ain’t worried about small talk. You ain’t worried about the other things that other people try to do to try to, you know, not give you your proper respect. You ain’t worried about that. You just lettin’ them run out, because they runnin’ out. That’s it. Runnin’ out. You know, and it’s all good. It is what it is. Let ‘em keep hatin’. Ain’t nothing gonna stop me, man.”

What Deontay Wilder means by "my people"? American people? his team? or it is the usual same dumb tribal sht again?

[QUOTE=MONGOOSE66;20225966]I could care less if he comes back, that said, he can probably still beat anyone including Spence due to his accident. He’ll never be the same.[/QUOTE] Yeah that accident may have damaged Spence. I'm curious to see how he…

I'm glad he said that Floyd needs to stay retired. No one cares about him at this point. I liked watching him fight in the ring because of his skill but as a person I don't care much about his…

Floyd acknowledged that he was a coward but atleast a rich coward...

even floyd own fans doesn't care anymore. He's boring and just run and hug in the ring....