Wilder: I Didn't Fire Deas Because He Didn't Go Against My Will

Deontay Wilder may not have given his head trainer and co-manager Jay Deas the boot, the way he did – unceremoniously – with co-trainer Mark Breland, but he wants to make it clear that Deas did not escape his wrath.

The former heavyweight titlist made lurid headlines for firing Breland earlier this fall. Breland, a former welterweight titleholder who helped train Wilder since he turned professional, was widely admired throughout the industry, and his dismissal, not surprisingly, was met with near-unanimous disapproval. But Wilder (42-1-1, 41 KOs) was infuriated that Breland had thrown in the towel in his rematch against Tyson Fury last February, since, as Wilder puts it, he has long insisted to his team that no one was ever allowed to stop a fight for him. 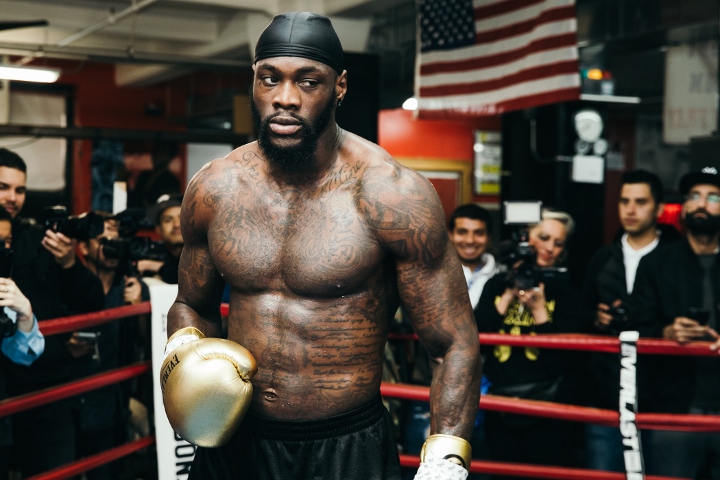 That hardline rationale has prompted some to question why Deas was not given the same treatment, given that Deas was the one tasked with overlooking the wrapping of Tyson Fury’s hands and selection of his gloves, a topic that is the source of an unsettling conspiracy theory – the so-called Glove Gate – for which Wilder himself is a prominent evangelist. If Fury had indeed tampered with his own gloves to the point that his own fingernails could poke out of them and thereby scratch the inside of Wilder’s ears, or so the hare-brained theory goes, why, then, has Deas not also been given the pink slip?

Wilder cleared up this discrepancy with Brian Custer. Apparently, Deas’ infraction did not reach the same level of flagrancy as Breland’s.

“Believe it, Jay got a mouthful,” Wilder told Custer on The Last Stand Podcast. “Believe that. Believe that. I didn’t fire him because he didn’t go against my will or what I’ve been preaching about for five years.”

Since firing Breland, Wilder has hired former heavyweight contender Malik Scott as an assistant coach. Wilder knocked out Scott back in 2014.

“I don’t care what situation I’m in or how it looks at the end of the day,” Wilder continued. “I signed up for this, I chose boxing. Can’t nobody help me in the ring. It’s a team effort, but it’s an individual sport. When I go in the ring I can’t get water when I want it, unless the time ends, and I can’t tag in or call timeout.

“So with that being said as a warrior and if you don’t know anything about being a warrior then you won’t understand anything what I’m saying,” Wilder said. “Anybody that hasn’t been in an altercation and dealing with life and death, blood and guts, you see, we all grew up differently. That’s why people can’t relate. Some people can, certain people can’t.”

[QUOTE=NahMean;20906195]Apparently video evidence shows Jay Deas drugged Wilder in the corner with cocaine. Source: LDBC [URL="https://youtu.be/BUmg5_sHchk"]https://youtu.be/BUmg5_sHchk[/URL][/QUOTE] Oosh. It's on video!!! That means it's fact!!! It's irrefutable proof!!! It can't be denied when there's video footage and screen shots!!! Anybody who…

[QUOTE=Fire4231;20908295][B]I had a picnic with Ken and Barbie today. As I was eating my strawberry jam sandwich, I looked down, saw the red, and it reminded me of the blood leaking from Ducktay Whiner's mouth and ear. Then I ate…

[B]Welcome to boxingscene I am that Fire...[/B] [QUOTE=6ixsidesniper;20908418]I heard Fury had glock strapped into his glove, that’s why Wilders ear was bleeding. [B]That’s not strange it not the most imaginative thing I have heard from those trying to suppress the…

[QUOTE=Fire4231;20896723][B]Really trying to convince yourself the arbitration isn’t happening huh? And you are calling other people crazy? Bro... when is Fury vs Joshua happening again? Let me guess after the Wilder Fury rematch? It’s already in motion bro, despite what…

[MENTION=12988292]NahMean[/MENTION] [COLOR="Indigo"]talking out of his ass. Dontae is New Media not LDBC. We just went over this like a week or two ago.This source is New Media.[/COLOR]