Wilder: Fury is Nervous, Knows His Face is Getting Smashed In!

The two unbeaten heavyweights will collide on December 1, in the main event of a Showtime Pay-Per-View card from the Staples Center in Los Angeles, California.

For Fury, this is his third fight since making his comeback earlier this year. For Wilder, it's his second bout of the year since knocking out Luis Ortiz back in March. 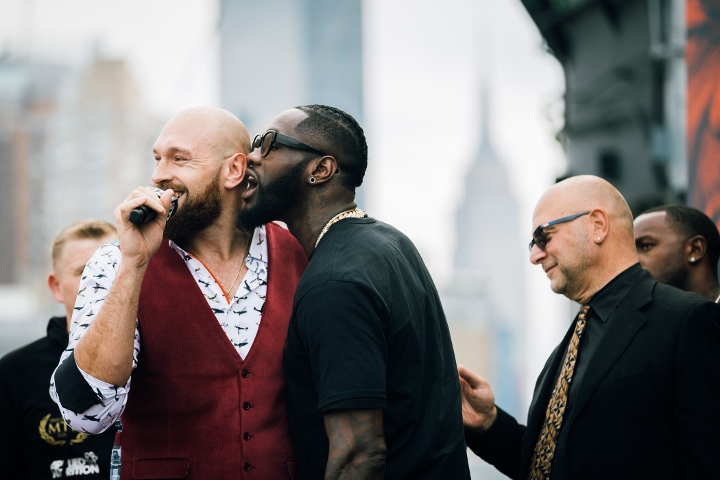 Before making his return in a stoppage win over Sefer Seferi in April, Fury had been inactive since November of 2015 - when he shocked the world by outboxing Wladimir Klitschko for a twelve round decision win for the WBO, WBA, IBO, IBF titles.

Issues which took place outside of the ring would eventually snatch away all of his titles.

Now he wants the one belt that he never captured.

But Wilder, who knocked out every fighter that he ever faced - is planning to make Fury another victim.

“We all know with me it comes with power and with knockouts. And that’s what I do. I get you guys motivated and I get you guys inspired to come and see a heavyweight fight. Because what you guys come to see in a heavyweight fight is a knockout. And I deliver that each and every time. Like I’ve said before, when I say I promise you, I promise you I’m going to knock out the Gypsy King, as well. TIMBERRRRRR!,” Wilder said.

"He knows what’s going to happen. He knows his face is going to get smashed in. And he knows his body will be on the pavement. Let him burn out this energy. It’s entertaining. Because when we get in the ring he’s gonna be all by himself and his demeanor will change. His mannerisms are going to change. He’s so nervous right now. He don’t know what do to with himself.

“Don’t give people false promises. I was born off of false promises and got nothing for free. I promise I’m going to knock you out. I speak it, believe and receive it and it’s mine. I don’t have to show so much energy, baby.”

I don't think Fury cares. He doesn't have anything to lose in this fight.

[QUOTE=j.razor;19160785]You sound mad that he is the favorite....LOL....you also sound like you wish his career would be over if it goes the distance....LOL[/QUOTE] Not mad at all, of course he is the fav, but Fury prefers to be the underdog…

[QUOTE=j.razor;19160821]Can't be when he is now fighting the lineal champ & he tried to fight the unified champ that won't fight him.[/QUOTE] you can want to fight someone and still be nervouse ,idk who is holding back AJ or Wilder…

[QUOTE=1hourRun;19160460]Tyson Fury is leaving Staples-Center in a stretcher and his body will be dumped in the sewers where it belongs.[/QUOTE] Wow didn't know he pissed in your corn flakes. Thats a real nice thing to say about someone who never…

[QUOTE=Adamsc151;19160866]AJ wants the fight at least as much as Wilder does, although I think there was a slight crisis of confidence in the 2 fights immediately after Klitschko which has been restored somewhat after the Povetkin fight. The issue is…