Deontay Wilder will be making his FOX pay-per-view debut Saturday against Luis Ortiz, but it almost never came to be.

In March, DAZN offered Wilder $100 million for a three-fight package, including two fights with Anthony Joshua.

The WBC heavyweight champion eventually declined the nascent OTT streaming platform’s payday, and went on to fight Dominic Breazeale on longtime broadcast partner Showtime, destroying Breazeale in one round.

“I didn’t take the DAZN deal because the people that were representing DAZN were coming with an offer that wasn’t up front and truthful with me,” Wilder told BoxingScene.com in an interview. “They came back and apologized to us. They knew they were in the wrong … The money is not going to be the motivator of everything. I bet on myself. I make way more money than what they’re offering anyway. 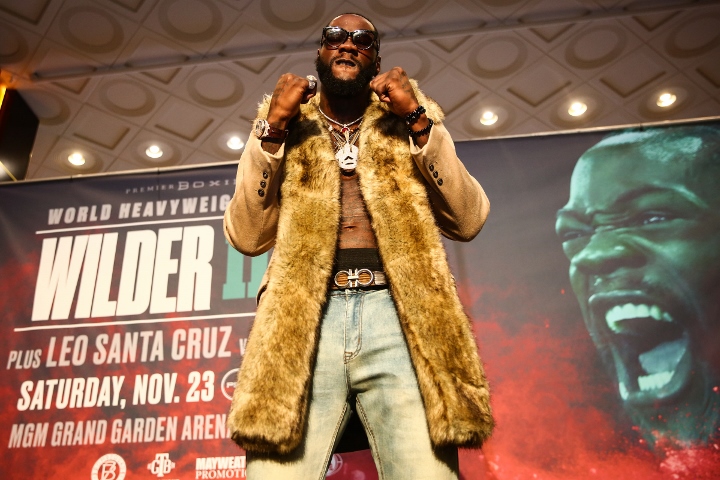 When asked to elaborate, Wilder instead chose not to offer too much in response.

In an interview last month with Lance Pugmire of The Athletic, DAZN executive chairman John Skipper commented on the Wilder negotiations, saying: “In retrospect, I was too brash going in there without creating the relationships I needed to create with the people who advised Deontay Wilder. I have now worked to do that. It has to do with going back to the education I needed before getting into boxing … When we left that (Wilder) meeting, I knew we messed up and that we weren’t going to be successful.

In hindsight, Wilder said he’s glad he passed up on the DAZN deal, because Joshua ended losing to PBC stablemate Andy Ruiz in June, and thus creating havoc and uncertainty in the heavyweight picture.

“Look how god works. If I signed that deal, I would have still been sitting around, waiting for Anthony Joshua, and the fight would not be as big as it was before he lost. We would have lost value,” said Wilder.

[QUOTE=Curt Henning;20213526]but bob was willing to do 7 each.....6 million over 2 fights is small potatoes if you believe Floyd will be a star....bob didn't believe that's the problem....he believed hed win the fights but not that he would be…

[QUOTE=harry-greb;20213374]But Floyd wasn't a ppv star at that point so those guarantees might have been hard for the Bobfather to swallow. Cotto wouldn't have been cheap either[/QUOTE] but bob was willing to do 7 each.....6 million over 2 fights is…

[QUOTE=Curt Henning;20211979]he did ask for hatton [url]https://www.espn.com/sports/boxing/news/story?id=2420382[/url] "Arum said while Mayweather would have taken the $8 million to fight Margarito, he asked for a $10 million guarantee to fight opponents such as Miguel Cotto and Ricky Hatton, when Arum was…

[QUOTE=harry-greb;20211629]Don't think he could have asked for Hatton. He wasn't with top rank[/QUOTE] he did ask for hatton [url]https://www.espn.com/sports/boxing/news/story?id=2420382[/url] "Arum said while Mayweather would have taken the $8 million to fight Margarito, he asked for a $10 million guarantee to…

[QUOTE=JLC;20209492]I think he’ll turnout fine. He’s at about 30 mil min so far, two fights in. He’s not behind the DAZN curtain so he’s getting tons of exposure. He’s gotta make 45 mil per fight in his next two fights…